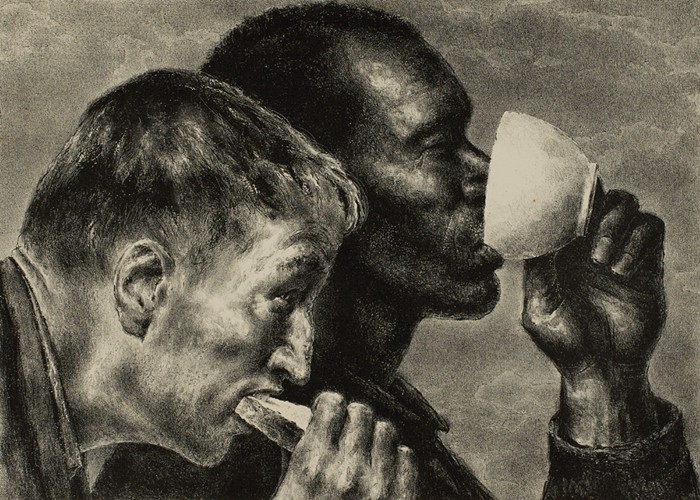 In 1941, a typist in Billings, Montana, might see an ad in the back of Arts Digest shouting, “Now you too can own American masterpieces, such as the great Museums select for their permanent collections, at $5 each.” The typist could send away for a catalogue, receive a pamphlet from the Associated American Artists with dozens of etchings to choose from, and then select an original, signed lithograph for five bucks (with a frame for $2 extra). Almost 80 years later, these prints are indeed in museums around the country. The Portland Art Museum (PAM) has over 200 in its collection and has curated around 60 for the upcoming Associated American Artists: Prints for the People, which will open April 6 and run through August 18.

AAA was dreamed up by Reeves Lewenthal in 1934. The idea: Pay an artist $200 for an original design, make 250 prints, and sell them at $5 each (that’d be about $90 in 2019). With enticing language and a middle-class price point, the business took off. It helped that among the artists were heavy hitters of the day like Grant Wood (the painter of “American Gothic”), Thomas Hart Benton, and John Steuart Curry.

“Lewenthal wanted art accessible to wider people and not just wealthy New York art dealers,” says Chyna Bounds, who curated the PAM exhibit. “He wanted to take these fine arts outside of the museum context and the white-walled gallery context and present them in a new way so that anyone could buy [them].” At the same time, he shrewdly saw a gap in the market, where art could be marketed like any other product from a Sears Roebuck catalog.

Lewenthal oversaw which prints made the final cut—i.e., which prints he knew would sell, typically images from the American regionalist movement that depicted farms and landscapes from the heartland. For many in the art world, AAA is synonymous with these works.

“Generally, as curators, when we think of the AAA prints, we think of nostalgic rural scenes, things very comforting, very safe,” says Mary Weaver Chapin, PAM’s curator of prints and drawings. “But Chyna kept pulling out all these prints from foreign-born artists, and it really helped me change my understanding of what was happening here. I thought, ‘Oh AAA artists, that’s farm scenes.’ But no—we’ve got city, we’ve got farm, we’ve got international influence.”

Bounds discovered many prints from AAA’s Department of Latin American Art, which started in 1946. AAA partnered with Mexican printmaking collective Taller de Gráfica Popular and began commissioning art from other Latin American artists as well as sending AAA artists abroad. “It’s not just farm images,” says Bounds. “That’s a lot of it, and was a really big theme at the time, but it expands further, and I hope it will connect with more people.”

One in particularly rare print will be exhibited. “Sultry Night” by Grant Wood depicts a fully nude male farmer—his pale white torso contrasted against his deeply tanned limbs—pouring a bucket of water over himself at dusk. The US Post Office deemed it obscene and refused to fulfill mail orders of it. Only 100 prints were made, and they could only be purchased in-person in New York City. “It’s not only Grant Wood’s most rare print, but it’s the most rare print in the AAA,” says Bounds.

Another print by John Steuart Curry depicts a brawny white farmer standing in a sea of rolling wheat and staring grimly into the wind as his cherubic, naive children frolic in the waves of grain. If it sounds a bit like propaganda, it was—the sketch was a model for a 1942 US War Bond poster that, in full color, read “Our Good Earth ... Keep It Ours,” an unsubtle call to arms for Midwestern farmers to do their duty and feed the troops.

AAA was innovative for its time—it helped democratize art, allowing collections to spring up in places like Arizona and Kansas. It gave artists a steady income, ushering many through the Great Depression. It springboarded new artists’ careers, subsidizing less popular artists with the sales of bigger names. And yet it also tells a story of art’s relationship with commerce, consumerism, and nationalism—the works that “sold” told a narrow story of America. And while Lewenthal advocated for his artists, he also made connections with government entities and advertisers in order to spur more partnerships and commissions (tobacco advertisers loved the pastoral farm scenes).

“We can enjoy them just as beautiful lithographs or etchings, but it really holds up a mirror to the time,” say Chapin. “And if you scratch the surface, you can find out, ‘What were the politics of the family farm? Why is this print significant socially?’ I think that’s what’s made it such a rich exhibition.”

Tags: Arts visual arts Spring Arts 2019 Culture
If you enjoy articles like this, please help the Mercury continue our mission of providing up-to-the-minute information, progressive journalism, and fun things to do in Portland by making a small recurring monthly contribution. Never forget: Your help is essential and very much appreciated!
CONTRIBUTE NOW