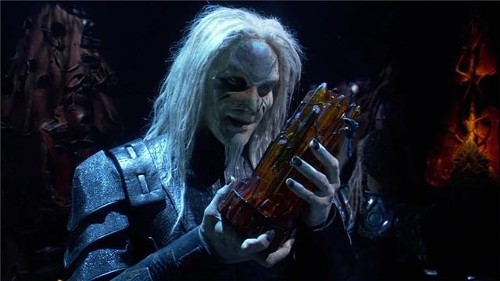 Mad Men showed up on Netflix instant watch a few weeks ago, and both in person and on Twitter, it's been cool to see friends who haven't previously watched the show get into it. (Yes, Sally is terrible; yes, so is Betty; and Roger and Joan... I know, right? And etc.) There aren't many shows that grip so many people so strongly, and it doesn't hurt that each episode of Mad Men has all sorts of crap to delve into—it's a show that rewards rewatching, and rewards discussion, and also has really neat clothes, and man, I don't even care about clothes.

Meanwhile, Stargate Atlantis is a show that features space vampires with handginas, one of whom is named Todd. It's a spinoff of a show that was itself a spinoff of a movie, and if that wasn't enough, there's so much of Gene Roddenberry's uncredited DNA inside it (ewwww) that it frequently feels more like old-school Star Trek than most new-school Star Trek. I've spent a lot of time writing about Stargate, and a lot of time thinking about it, probably because I've spent a truly staggering number of hours watching the goddamn shows, from SG-1 to Atlantis to Universe (or as much of Universe as I could force myself to pay attention to, anyway). Because it confuses me: How can a franchise that's this goofy, that's this disposable, that doesn't reward rewatching or discussion, that only a handful of my geekiest friends even pretend to care about—how is it that despite all that, when I saw the complete series (again) last month, all five seasons of Atlantis on Blu-ray, I get all excited? That's something worth owning, I thought when I saw it. I should have that. And now it sits on my shelf right next to Mad Men.

Credit where credit's due; it's not like Atlantis is without its charms. The cast, for one thing, is likeable and charming and funny, and frequently are utilized to pretty great effect. Particularly solid are Jason Momoa—AKA Khal Drogo from Game of Thrones—and David Hewlett, AKA James Franco's Incredibly Unlucky Neighbor in Rise of the Planet of the Apes. Like SG-1 before it, Atlantis boasts a cast of workingman genre actors who do simple things very well, or do tricky things well enough to make them look simple, and who also manage to (usually) sell preposterous lines while standing on cheap starship sets or talking to unfortunate people who're buried underneath 43 layers of alien latex. Then there are the pulp sci-fi aspects of the show—it's full of explosions, and preposterous pseudo-science, and adventure at all costs, even when those costs are deducted from basic plot cohesion. And then there's the humor: Stargate Atlantis (like SG-1, and unlike Universe) is aware and even kinda proud of it's B-movie (B-TV?) status, and it never takes itself seriously: I direct you to anything Hewlett's hilariously arrogant/self-involved/slightly Asperger's-y character ever does, or remind you of the fact that our heroes' chief foes look like Nelson. And have handginas.

So I guess some TV is worth keeping because it's genuinely great, and that TV would totally deserve a 400,000 word post delving into why it works, and how it works, and why it's great that we can discuss it with our friends and, within the show's confines, discover particular relevances to our lives. The Larry Sanders Show, or Mad Men, or Deadwood, or Freaks and Geeks, or [your favorite beloved TV classic here]. But then there's some TV that just works—albeit in a vaguely embarrassing and silly way—at entertaining the audience, at stringing along the same characters from week to week, at churning out boilerplate plots that're nonetheless peppered with just enough originality and uniqueness to make 'em enjoyable and fun and distracting. Stargate Atlantis is in that category, and I'd also put it in the category of old radio serials, and a whole lot of superhero comics, and the worn, soft paperbacks that litter the shelves of the Yellow Room at Powell's. It's genre, and it's formula, and it's been available on Netflix instant watch for god knows how long and absolutely nobody I know has even noticed or cared. Atlantis might not be the sort of show I can mention at a barbecue with some vague acquaintances in order to get a comforting conversation going, but as something to watch when I get home and just want to chill the fuck out and watch some soldier scientists fight some space albinos? Yeah. Sign me up.

So I guess that's why I got excited when I saw the Blu-ray set.

(In addition to some token notations—the HD video quality is solid, if not spectacular, and I'm pretty sure all the extras are just carry-overs from the DVD sets—I feel obligated to note that one particularly silly episode of Atlantis—titled "Brain Storm"!—guest stars Dave Foley, Neil deGrasse Tyson, and Bill Nye the Science Guy. I don't have anything to add to that, really, except come on, that's pretty awesome. Maybe not Stephen Hawking on Next Generation awesome, but still.)