Inside the New and Improved Bagdad Theater 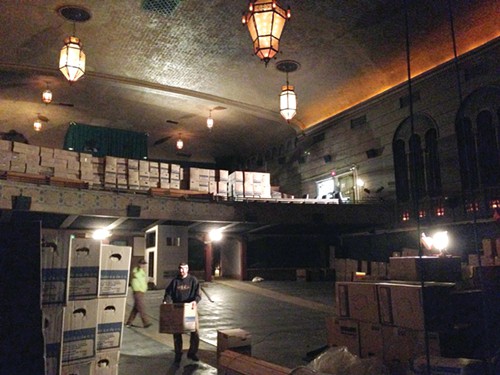 The Bagdad Theater on SE Hawthorne is currently closed to the public—for the first time since McMenamins took over the property in 1991. The place is getting a full renovation, and when it reopens in November, it'll be a first-run theater complete with a 4K digital projector, 7.1 sound, new seats, and a screen that'll be 50 percent larger. Last week, I stopped by the theater and met with McMenamins Chief Operations Officer Lars Raleigh, who showed me around the in-process restoration. In the process, I got to see what the Bagdad looks like when all of its seats are missing! (It looks weird. Movie theaters look weird without seats.)

"It's about competing with the home theater," Raleigh said when I asked him why the theater's getting a facelift and switching to first-run. Competing with living rooms is now a challenge for theaters that book second-run movies—as the Bagdad did, as other McMenamins theaters and many of Portland's most beloved theaters still do. You can thank movie studios, distributors, and yourself for that: DVDs, Blu-rays, On-Demand, and streaming services like Netflix now make movies available on TV before they're out of theaters (or, in some cases, before they even get into theaters). By the time second-run theaters get a movie, it's frequently already available to buy or rent—or will be within a matter of weeks. So in order to get people to heave themselves out of their couch's ass-indents, "you need something pretty special," as Raleigh puts it. "I think we're going to have that."

I think he's right—from what I saw, the new and improved Bagdad's going to be pretty slick. Part of that is thanks to Greg Wood, the owner of Portland's fantastic Roseway Theater and the manager of Seattle's great Cinerama. Wood came in to help McMenamins out as the the theater's consultant and film booker, and he's a guy who knows what makes for a good moviegoing experience. Just as Wood revamped the Roseway and the Cinerama, the Bagdad is set to become something better than it's been in a long while.

Orginally built by Universal in 1927 to serve as not only as a place to show Universal pictures but also as a vaudeville venue and, most importantly, a place where "female ushers wore uniforms meant to appear Arabian," the vaguely Middle Eastern-themed Bagdad is one of the anchors of SE Hawthorne, and brings with it a considerable history. McMenamins is aiming to recapture some of the theater's past glory, but do so in a way that respects the feel of the place. "We're pretty good at this historic preservation stuff," Raleigh says.

The changes start in the small, awkward lobby right off of Hawthorne: By putting in an honest-to-god box office, McMenamins hopes to speed up the outdoor lines that have plagued the theater on busier nights. That hope extends to the adjacent concessions area, where long lines have been... problematic. ("Oh god yeah," Raleigh says when I whine about the lines for beer. "That can be pretty brutal.") While the Bagdad will continue to serve more or less the same menu as before—beer, pizza, burgers, tater tots—they've added a few more stations for employees, as well as a secondary wall of beer taps so that food and beer can be dished out faster.

Throughout, the Bagdad's getting all-new carpet—the floors were exposed concrete when I visited—and the walls have all been cleaned and, in some cases, had their paintings touched up. By the time the theater reopens, new ambient lighting will show off the painted details and the alcoves that have been hidden in the Bagdad's murk (even without the lighting, I was seeing details and colors I'd never seen before). The cleaning and restoration of the walls and the paintings was a task in and of itself, says Raleigh: in some cases, a half-inch of dust was found on the walls, and no one could remember the last time they paintings had been touched up. Meanwhile, acoustic treatments in parts of the walls will help make the theater sound better than it has before—no easy feat, considering the Bagdad is basically a big concrete shell.

The auditorium itself will boast new, more comfortable, 24-inch-wide seats (the ones that used to be there, despite looking and feeling ancient, were installed by McMenamins in '91), and, like the Roseway, will feature ample spacing between the rows. It's here that some of the theater's operational changes start to kick in: Unlike in the past, when servers waded through the dark theater and had to disrupt everyone to get people their food, now orders will only be delivered to your lazy ass if you're sitting up in the balcony. And while the balcony's keeping all of its tables, down on the first floor, tables will only be available in the back half of the theater. (After the renovations, the theater will seat 313 people downstairs and 228 in the balcony.)

The new screen will be 25 feet tall and 46 feet wide—or half again as large as the Bagdad's screen was before. The screen will be backed up by the aforementioned 4K projector and, for sound, a 20,000 watt amplifier. (I'm no sound expert, but that's a big number, and I'm going to trust Raleigh that this'll do the job, considering one of McMenamins' goals with the place was to "kick the sound up a bunch.") Meanwhile, due to infinitely complicated, utterly unknowable reasons that can be boiled down to "math," the projection booth is now nestled in the back of the auditorium on the first floor—a change that, unless you like to sit in the very back row on the first floor, you likely won't even notice.

The theater's currently scheduled to open the weekend of November 22, with their first full engagement being The Hunger Games: Catching Fire. Which leads to questions about ticket pricing—studios take a far larger chunk of first-run ticket sales than second-run. "We're going to try to stay pretty modest," Raleigh says, adding that he expects ticket prices to be $8.50 for regular admission, $7 for matinees, and $4 for kids. (As to whether they'll show 3D, Raleigh said that they're set up to do so if they want... but he also didn't really seem to want to. Given Wood's involvement, and given the Roseway's stance on 3D, I wouldn't count on it.)

Before Hunger Games, Raleigh has a few ideas for preview-type events at the revamped theater—including a one-night screening of the Bagdad's most successful film ever, What the Bleep Do We Know*, and a possible benefit screening of Gus Van Sant's My Own Private Idaho, which played at the Bagdad back in '91.

"Every theater has to do their digital upgrade," Raleigh tells me—but not every theater has the time, the resources, and the desire to do so in the way McMenamins and Wood are upgrading the Bagdad. The theater certainly deserves it: Most movie palaces the Bagdad's age either no longer exist or, depressingly, were chopped up into makeshift multiplexes (like the Hollywood Theater, where the balcony was replaced with two small auditoriums). Like the main auditorium at the recently expanded Cinema 21, the Bagdad's size and balcony offer a glimpse into what going to movie theaters used to be like—and, thanks to these changes, the theater will soon reflect what it can be like to go to movies now. Assuming you can be bothered to leave the house.

*Don't even get me started on goddamn What the Bleep Do We Know. The same fluoride-hating hippies who believe in indigo children can't get enough of that goddamn movie, though—it played in Portland for months and months when it opened, even as its new-age mumbo jumbo was all but ignored everywhere else. So I don't know. Enjoy your terrible movie in your beautifully restored movie theater, Hawthornians, I guess? Try not to get your patchouli lice all over the new seats.