The city sprouted another organized homeless encampment on City of Portland property on Sunday. No one bothered to tell the city it was coming.

"The mayor’s office didn't know where we were planning on moving ahead of time," says Steve Kimes, a Portland homeless advocate. "I sent notice last night."

Kimes has been working with people living at Forgotten Realms, the nickname given to the tent community that's sprung up next to the city-sanctioned Hazelnut Grove encampment on North Greeley. As part of an upcoming permit for Hazelnut Grove, the city's planning to force campers at Forgotten Realms to move along by January 19. So some of them are hoping to start a camp of their own.

Roughly 10 homeless residents moved to a city-owned lot at North Kerby and Graham on Sunday. The site sits close to I-5, across the street from Legacy Emanuel Medical Center, and directly next to at least one home.

The spot's strategic, according to Kimes. He says the corner lot will allow easy service for garbage and portable toilets—amenities that were made tricky by Hazelnut Grove's relative inaccessibility. He expects a portable toilet in the next day or two he says.

"We’re hoping that the mayor or his assistant will come over—take a look at what we’re doing, give us the same kind of opportunities that Hazelnut Grove had," Kimes says.

At the camp Monday afternoon, campers were busy erecting tents and making other preparations. An old trailer, set up in the middle of the lot, is equipped with a generator and battery power. Its resident, Wesley Courverler, had a role in setting up Forgotten Realms, and says the new camp is a far more suitable living situation.

"I have just as much a right as they do to live," Courverler said of Hazelnut Grove. "If they move me, they've gotta move them."

Courverler says he'd like to begin building small structures on the property in coming days. Campers on site said Portland police had visited briefly Sunday, citing a complaint. While I was visiting this afternoon, Courverler knocked on the home next to the land—a large duplex—to introduce himself, but no one answered.

This new camp effort—and those that might follow—could present an interesting challenge for Mayor Charlie Hales. In recent months, Hales has shown a willingness to be relatively lenient with homeless campers, an acknowledgment that Portland has a shortage of both affordable housing and shelter space. Last month, Hales' chief of staff, Josh Alpert, directed all city bureaus to alert the mayor's office when a camp sweep is being considered, arguing that should only happen when absolutely necessary.

But the permissiveness has rubbed some residents the wrong way. The Overlook Neighborhood Association has railed against the campers at and around Hazelnut Grove, and even demanded a public list of campers so residents could conduct their own background checks.

Kimes says he and others scouted around a dozen different locations when looking for a new camp site, and that they "wanted to make sure it was not a place in the Overlook Neighborhood." The spot they landed on carries plenty historical significance. It sits between an interstate and hospital that each contributed massively to displacement from the neighborhood—at one time the heart of Portland's African American community.

Kimes and Courverler say that anyone who'd like to move into the space will have to agree to abide by a code of conduct, and that camp leaders will limit the number of people living at the site. Courverler said he's thinking 30 people could live on the plot.

"After having lived near Hazelnut Grove, everyone is in agreement that that is just plain too many people," Kimes says. Here's the code of conduct the camp plans to enforce: 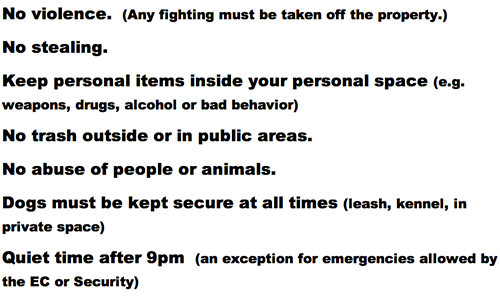 As for the city, it was still trying to get its head around the situation this morning.

"Reports are just coming in," said Jen Clodius, a spokeswoman for the city's Office of Management and Finance. "The city has not authorized camping there."

"The City is open to facilitating organized camping once it identifies land on which camping could take place," mayoral spokeswoman Sara Hottman tells the Mercury. "Folks occupying land does not mean the City will sanction a camp; indeed, nobody should be occupying City land without having first discussed it with the City."

Hottman said in an email that Alpert, the mayor's chief of staff, spoke with an advocate who'd mentioned that campers from Forgotten Realms had organized and drawn up a code of conduct.

"He told them that was great, but that the City didn’t yet have land to offer to them," Hottman said. "Josh continues to search diligently and daily for such land."