Jim Belushi: Medical Marijuana Would Have Saved My Brother’s Life

Jim Belushi is growing a lot of pot along Oregon's Rogue River. Courtesy of Belushi's Farm
Jim Belushi is far from the first celebrity to get into the legal pot game. Stoned luminaries like Willy Nelson, Snoop Dogg, Tommy Chong, and the Marley family are selling pot with their names on it in multiple states across the country, but Belushi’s doing something different. These other celebrities have simply created a brand that they then license to pot farmers, whereas Belushi is actually growing the pot on his own property, often with his own hands.

Belushi started slowly, first with a small medical grow three years ago and then transitioning into a full recreational farm with multiple outdoor and indoor gardens. He’s been selling his carefully curated set of strains for two years but only recently decided it was time to put his name on the label. Pot shoppers in Oregon can now buy weed strait from Belushi's Farm.

I caught up with the former Saturday Night Live (SNL) star by phone a few weeks ago. The actor and musician’s voice was hoarse from singing at a community party he throws on his farm every year. We talked about what it’s like growing legal pot, working with David Lynch, a vape pen of his that's been making the rounds in Beverly Hills, and how he thinks medical marijuana could have saved his brother John Belushi’s life.

Courtesy of Belushi's Farm
Lester Black: How long have you smoked pot?

When I was in high school I smoked Mexican ragweed, which by the way I’ve been trying to get guys to do this with me. I want to do Mexican ragweed with 6 percent THC. So I can actually smoke a whole joint! Today’s [THC] temperature is pretty high, it’s kind of a disappointment that people don’t understand that it doesn’t got to have high THC to be good.

Did you smoke pot at SNL?

No unfortunately when I was at SNL I was using whiskey as my medication.

How often do you think you consume pot now?

Maybe three times a week I take a hit off [my vape] pen. But I do consume CBD every day. Because I know the endocannabinoids in my body and my homeostasis is out of balance somewhere every day.

It’s interesting that you relate to it in medical terms because a lot of people think of cannabis only as a recreational drug. Do you separate medical use from the recreation use, or is it always medicine to you?

The wellness of cannabis is great for helping Alzheimer’s, people struggling with PTSD, people struggling with trauma. The number one fear of life is death and the second is the collapse of family. Many people come from collapsed families, whether it’s divorce or a disease in the family that broke the family up, whether there’s a death like in my family, a loss of business, all of these people need some kind of medicine.

All of these men who came back from World War II saw things that no one should see and they leaned on the alcohol. That was their medicine. And we had a generation of children who grew up with parents that were alcoholics. Collapsed families. Then in the 1960s marijuana came and it was a medicine but they called it a drug, but that’s what they were doing.

My brother was an all-state, all-conference, honor society—he was a football player, middle linebacker. He got the most tackles every year. And then I saw him go into a seizure in my house and I didn’t know what it was. And now we know it could have been CTE. And then he went to college and he found his medicine, but it was considered a drug.

Do you think if medical marijuana was around then it could have helped him?

I think what we know about marijuana today, if we knew in the '70s, a lot more people would be alive, including my brother. Danny Aykroyd said, ‘If your brother John was a pothead he would be alive today.’

The medicine of marijuana will help prevent the collapse of families. I came from a collapsed family and the trauma of John’s death, you could imagine, and I’ve always been in search of family because of it. And this family of marijuana cannabis people is a terrific family. They’re all being led by the plant.

But the wellness of cannabis is not just for Alzheimer’s, headaches, anxiety—it also enhances the sound of music. It sparks creativity. It enhances the taste of food. It enhances the touch of your lover’s skin. It also gives you euphoria, a sense of joy, and a higher consciousness. So there’s wellness all across.

Courtesy of Belushi's Farm
I loved your work on the Twin Peaks reboot. What was it like working with David Lynch? Is he someone that seems like he’s stoned even when he’s not smoking weed at all?

Well, most of the time we have a half-hour lunch on set. But on David Lynch’s projects, we have an hour lunch because he’s meditating for that hour. When you watch Twin Peaks [you think] that guy must have been doing Ayahuasca because the visions that this guy has. But he gets it all from meditation.

Are you starting to share your cannabis with other people in the industry? Other comedians or other actors?

No, but I have this Cherry Pie [vape] pen and my wife took it to her girl's group and they’re all flipped about it. And I can’t tell you the names of the girls, but just know that it’s girls in Hollywood and they all want it for Christmas. Where can I get some? And I say, well it’s in Oregon but we may come to California, don’t worry.

What do you think about being another celebrity in the cannabis game? There’s obviously Snoop Dogg and Willie Nelson, and Marley’s Naturals. How does it feel to be one of the first celebrities to get into the industry?

The difference between me and the men you just mentioned, all beautiful men by the way, is they are white labeling. I am growing it. I am curing it. I am flushing out the irrigation to make sure the ash is white. I’m pruning it, I’m trimming it. And now I’m marketing it.

But I love the agricultural of it. I love the girls, I love the feminine energy on my farm. But like all girls you have to treat them right. I play music for them. When they’re vegging I play baby-making music for them. I play Marvin Gaye, and then as they are growing I play reggae, and then when we’re about to take them down I play gospel music so they feel like they’re seeing God before we take them. I love these girls*.

Courtesy of Belushi's Farm
*Pot farmers commonly refer to weed plants as "ladies" or "girls" because only the female pot plants produce the intoxicating flowers we smoke.
Comments 1
Tags: Cannabis 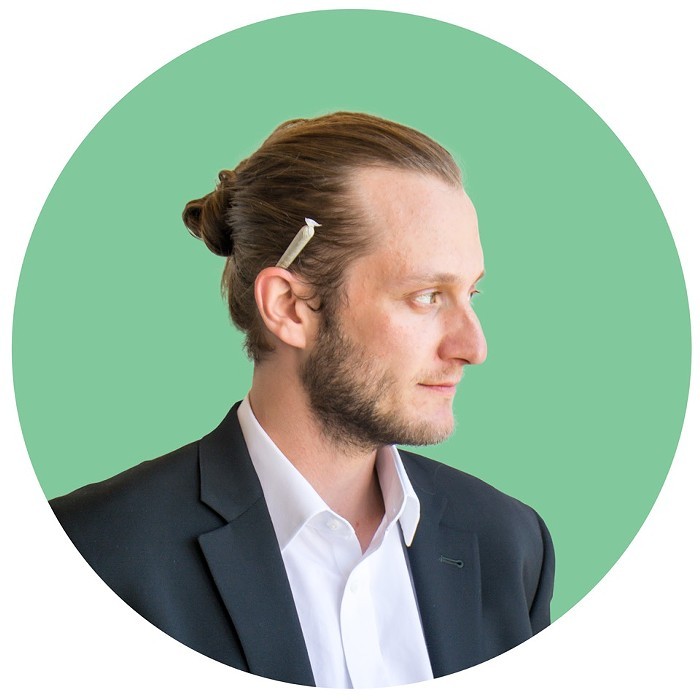