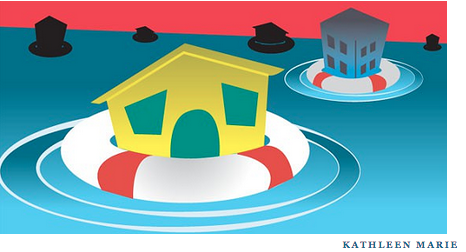 
This week, a committee from one of the city's premier civic organizations is largely agreeing.

In a report released Wednesday, an 11-member research committee for the City Club of Portland recommends the city take an array of new steps to address its burgeoning housing affordability crisis, which has ushered in nearly double digit rent increases and even higher home price hikes in recent years.

The money quote of the report: “We must not be satisfied with saying in one breath, ‘Live in Portland and innovate in the arts, technology, and the environment and also have a good quality of life,’ and in the next breath, ‘You will have to live on the outskirts of the city, far from great public transport and amenities, and we’ll allow your landlords to keep raising rent and evicting without cause.’”

The report—developed with the help of 20 "witnesses" and months of discussion—is a notable effort from an organization whose research is not infrequently cited to justify new policy tweaks. It's also a helpful summary of how dire the housing situation's gotten here in recent years, and worth a read in full.

But here's a brief rundown strategies the committee is calling for:

•An end to the state’s preemption on rent control, so that local officials can consider policies that might help stem the tide. In particular, the committee seems intrigued by "rent stabilization" a sometimes-controversial strategy (developers hate it, and some economists say it only makes matters work) that limits how high landlords can jack up rents.

With Oregon economists projecting Portland’s population to grow by 25,000 to 30,000 people per year, and household sizes on the decline, the city cannot simply build its way out of the affordability crisis. Portland and Oregon must also consider regulatory solutions that address housing affordability in the short term.

•Stopping no-cause lease terminations that give renters little control over their living situations, and replacing them with a "just-cause" eviction law similar to Seattle's.

The fact remains that given the nature of no-cause evictions and the lack of recourse they allow, they can be issued capriciously or used in discriminatory or retaliatory manners, for example against tenants who ask for repairs.

•New revenue dedicated to building affordable housing. That could come from "linkage fees" charged to developers, a bond measure, or a levy dedicated to housing.

•A policy of "banking" foreclosed homes and other properties as available, for use as affordable housing.

The Great Recession was a missed opportunity to purchase property at lower prices that Portland could have used for future affordable housing. It’s not a historically common tactic — only five states had land bank legislation until 2008 — but it’s a useful modern one.

•Bolstering incentives that help developers choose to make units affordable. Such incentives have been a central strategy for coaxing cheap housing lately.

Comments 1
Tags: Housing News $$$
If you enjoy articles like this, please help the Mercury continue our mission of providing up-to-the-minute information, progressive journalism, and fun things to do in Portland by making a small recurring monthly contribution. Never forget: Your help is essential and very much appreciated!
CONTRIBUTE NOW