Portland is Plotting to Set Aside 2,000 Apartments For Its Hardest-to-Reach Homeless Residents 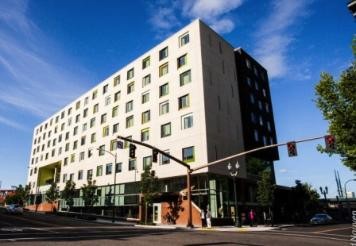 Bud Clark Commons—perhaps Portland's best known permanent supportive housing development.
Sometime in the next six months or so, local officials are going to present a case for how Portland can dramatically increase housing for its most down-and-out individuals.


In a unanimous and long-portended vote this morning, the Portland City Council voted to order up a report laying the groundwork for 2,000 more units of supportive housing in Multnomah County in the next decade. The Multnomah County Board of Commissioners will approve the same thing tomorrow, and both governments will chip in to pay a consultant to draft a report in coming months.

So on one level there's just that: A mundane resolution ordering a report.

In a city that in recent years has prioritized building "workforce housing" units—that is, apartments that enable mid-wage workers to live closer in, near their jobs—the vote today signals a focus on the growing number of chronically homeless and disabled people living on the streets. The target for supportive housing is people who suffer from addiction, mental illness, or some other disability, and who have been homeless for a long time or find themselves homeless repeatedly.

"Quite frankly, they are caught in a costly, inefficient, failed system," City Commissioner Nick Fish said at today's hearing. Along with County Chair Deborah Kafoury, Fish has been a leading proponent for ramping up supportive housing, which pairs extremely cheap rents with intensive social services to help people back on their feet. One high-profile example in Portland: The Bud Clark Commons.

The sticking point is that this housing is expensive, though there's an argument it actually saves public dollars in the criminal justice system and other arenas. (The resolution council voted on today suggested that supportive housing costs between $24 and $54 a night, far less than a night in jail or the Oregon State Hospital—though it's also designed to require those costs for far longer than either of those.) A big part of the work in coming months will be piecing together what money exists, and what funding gaps Portland and other entities need to fill.

Portland's identified some money already. As we noted last week, the City Council is aiming to create 300 units of supportive housing with part of the $258.4 housing bond voters passed last week. But pretty much everyone acknowledges more money will be needed. And Mayor Ted Wheeler—said to be skeptical at first about committing to dramatically expanding supportive housing—hasn't been shy in recent weeks suggesting the city will hike taxes in some regard.

As he told the Mercury recently:

"There are things that we have not done in this community. Cell phone taxes. Some communities tax sugar products. Others dig deeper into their travel and tourism industries.... There are probably lots of other good ideas out there that I’ve never even thought of.”

A Portland-specific cell phone tax, in particular, seems to hold interest in City Hall. Oregon has historically taxed cell phones at lower rates than other states, and there's some thought that a policy here could raise a lot of money. Plus, it might be something Portland City Council could pass without asking voters.

Whatever emerges, Wheeler suggested today he'll be in the fray.

"I intend to put the resources of my administration fully behind this effort," he said today.

If the city, county, and others are successful in creating the new housing over the next decade, it would represent a 61 percent increase in the city's supportive housing. But it still wouldn't be enough According to numbers attributed to the New York-based Corporation for Supportive Housing, Portland currently has an unmet need of roughly 2,800 units of supportive housing, and homelessness is on the rise.

Comments 1
Tags: Housing News City Hall
If you enjoy articles like this, please help the Mercury continue our mission of providing up-to-the-minute information, progressive journalism, and fun things to do in Portland by making a small recurring monthly contribution. Never forget: Your help is essential and very much appreciated!
CONTRIBUTE NOW