Portland's Renter Relocation Policy Is Now Permanent—And Stronger Than Ever 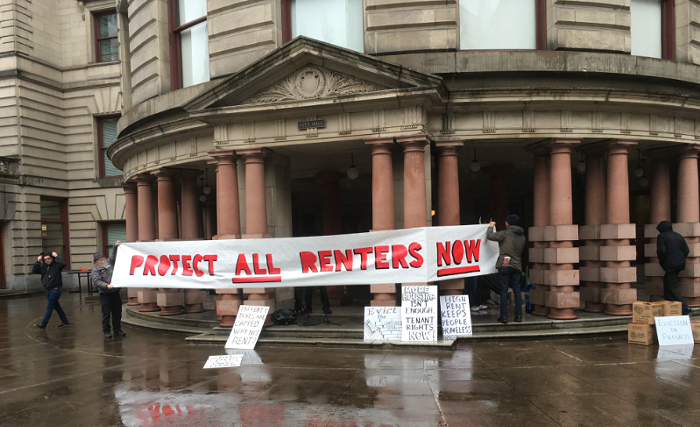 
After kneading out disagreements over the policy, the Portland City Council this morning unanimously expanded and made permanent the requirement that landlords pay between $2,900 and $4,500 in tenant moving expenses in some instances.

As expected the new, permanent statute now ropes in landlords who only rent one unit of housing, a major demand of tenant advocates. And the law now requires landlords to report to the city when they pay tenants relocation expenses, or when they plan to claim one of the remaining exemptions in the bill—a move Mayor Ted Wheeler says will help the city track how the policy is working.

In a somewhat recent development, the law even had the unanimous vote required to pass on an "emergency" basis, meaning it goes into effect immediately. Commissioner Amanda Fritz had retained serious doubts about forcing single-unit landlords to abide the policy, but her position changed when City Council agreed to add one additional exemption to the law: Now, landlords who issue a fixed-term lease to a tenant with an explicit understanding that the unit will be converted or sold at a certain point are free of having to pay relocation fees.

The relocation ordinance kicks in when a landlord issues a no-cause eviction (including refusing to renew a lease) or forces a tenant to move with rent increases of 10 percent or more.

Since the law was first suggested by Commissioner Chloe Eudaly in February 2017, landlords have complained that it's led to property owners selling their rental units, thereby decreasing the amount of rental housing stock in the city. Tenant activists say the law has dramatically cut down on no-cause evictions. To date, there's been little hard data that backs up either assertion, but that didn't stop council from extolling the law.

Fritz had a more measured tone. "I'm concerned that some landlords will raise rents by 9.9 percent every year or sell the unit or turn it into an Airbnb," she said. "I don't see any of those being in the best interest of renters." She added, though: "We know it has limited no-cause evictions. We know that is has been crucial for some people."

The bolstered law council passed today still includes loopholes, including a pass for landlords who want to move immediate family members into a unit, landlords who rent out the other half of a duplex that they also live in, and people who are renting their primary residences for three years or less.

Commissioner Dan Saltzman had proposed doing away with an exemption on affordable housing providers written into the law, but backed off today. Instead, he said he'd allow a narrow exemption for cases where low-income tenants' income changes enough to force them to pay more for a unit, or when the amount of their rent subsidized by the government increases.

The council didn't take up other concerns over the law, including a worry that landlords could simply jack up fees associated with a home, or eliminate certain "concessions" attached to the unit that effectively hike rents. In testimony on the law, tenant advocates had reported huge increases in utility payments, pet fees, or parking fees—none of which count as rents under the ordinance. Eudaly also voiced concern about the loophole for landlords moving in family members, which she said could be subject to abuse.

Wheeler, the city's housing commissioner, promised to bring those issues before the city's new Rental Services Commission, and report back to council with recommendations.

Wheeler also took a weird rhetorical stand at the hearing. When Fish suggested an amendment putting an emergency clause on the ordinance—which, again, made it go into effect immediately—Wheeler voted "no." The mayor said he'd heard concerns from the Portland Housing Bureau about how difficult it would be to implement the changes immediately.

Wheeler could have easily made that stance count by also voting against the ordinance itself—a 4-1 passage would have eliminated the emergency aspect. Instead he voted "yes."

"We are providing clear and definitive leadership," Wheeler said. "I certainly have a difference of opinion regarding the emergency clause. We're going to have to work very, very quickly to notify landlords of these changes."

While the new changes go into effect immediately, the renter relocation law isn't completely out of the woods. Landlords are currently challenging the law in the Oregon Court of Appeals.

Comments 1
Tags: Housing News City Hall $$$
If you enjoy articles like this, please help the Mercury continue our mission of providing up-to-the-minute information, progressive journalism, and fun things to do in Portland by making a small recurring monthly contribution. Never forget: Your help is essential and very much appreciated!
CONTRIBUTE NOW