The Ruiz Questions, Part Three: "I've Nothing To Hide." 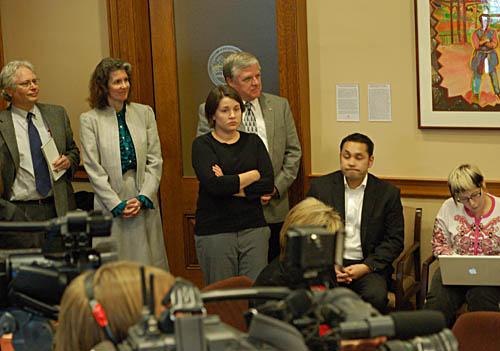 Ruiz applied for the job as Adams' Sustainability Policy Adviser on November 3, 2008. "The skills I've developed as a journalist coupled with my knowledge of Portland make me ideally suited to serve Mayor-Elect Sam Adams as a Planning Policy Analyst," she wrote, in her application letter, a scanned copy of which, with address and contact details redacted, you can find after the jump.

Ruiz said she first heard about the position on October 27, from her RSS feed of Commissioner Adams' website, where it was posted.

"After a decade spent writing about what other people are doing I wanted an opportunity to go about doing it," Ruiz said, at a meeting with the Mercury this afternoon in Mayor Adams' office, shortly after the conclusion of Adams' apology press conference. "I had applied for another job at a non-profit where I assumed I'd be earning less than I was earning at the Mercury."

"We were surprised," said Adams' Chief of Staff, Tom Miller of Ruiz's application. "We certainly didn't see it coming." Miller said he has been responsible for all hiring and firing for Adams since 2005.

"I think you can look to my work and see that it didn't change, [after the application for the job went in]," said Ruiz. "I've got a three year record [at the Mercury and I think it speaks for itself. A lot of that work was done in the context of an opinion column, because my opinions are my opinions, and I stand by those opinions."

"I've been consistently critical of [Adams'] position on the Columbia River Crossing, I think I also expressed disappointment that he didn't give the police bureau to Randy Leonard," Ruiz said, when asked how she had been critical of Adams in her coverage over the last year.

"I'd have to go through the record bit by bit," she said, when asked how else she had been critical of Adams. More after the jump.

In her application for the position, Ruiz was direct.

"I'm at my best when I'm tackling a new issue and asking incisive questions to get at its core (on a tight deadline, too)," she wrote. "And I've earned a reputation as a hard working, creative self-starter, someone who will do whatever it takes to excel on a project."

Ruiz provided three references: Metro Council President David Bragdon, Metro Communications Director Jim Middaugh, and Our Oregon Communications Director (and former Mercury news editor) Scott Moore. She also attached a printed copy of the article "We Don't Want It," about the Columbia River Crossing, which ran in the Mercury last July 3. Ruiz wrote that the article was "an example of my ability to analyze and break down complex projects, and explain them to the reader in a clear and concise way."

Ruiz decided to apply for the job after a conversation with Miller in his office on Friday, October 24, she said, which came about as a result of "making the rounds," during which Miller had asked her what her plans were for the next five years. The job was advertised on Monday, October 27, according to Ruiz, but Miller told the Mercury that he had been "surprised," a week later, when Ruiz handed in her application for the position at Adams' front desk.

Miller went through an "exhaustive process" to hire for the position, he said, which included whittling down 31 applications to a shortlist of 3, which was done by Adams Senior Policy Director, Lisa Libby, during a series of 15-minute "fit" interviews, at which Libby said she asked the candidates a series of five questions designed to determine their "fit" for the office. Miller said a good "fit" meant "someone who could communicate, and was a team player, consistent with the job description."

"Amy emerged, finally, as the strongest candidate for this position," said Miller, "and I shared my view with Sam, and he was surprised, but he had very good things to say about Amy, given her proven record as somebody who worked extremely hard, asked difficult questions, and above all had a clear passion for the wellbeing of the city."

"Sam was enthusiastic about this situation but the decision [to hire Ruiz] was mine and mine alone," said Miller. "We offered Amy the position, she accepted, and from that point on she's been nothing but an asset to taxpayers and citizens of Portland. She has been terrific."

The other two candidates on the shortlist of three were a person with a Masters in urban planning and 3-4 years' experience in post-Masters policy and administration, said Miller. But that person "made clear at interview that their preference was to work 40 hours a week if possible, and that was the fatal flaw." The other shortlist candidate had a Masters in public administration but was "too young in the sense of marketplace experience," said Miller. "He was a terrific young man but over his skis in terms of his ability to do the job. He's the sort of person I would hire three or four years down the road."

Miller is seeking the city attorney's approval to release a summary list of other applicants for the position to the Mercury, with their experience written down.

"This is largely a translation job," said Libby. "A lot of the time you are taking Sam Adams' vision and translating it into language that is digestible for the [planning and sustainability] bureau. Sam is pretty good at communicating his message to the public, and council, the bureau, however, is—just because somebody is good at land use planning doesn't mean they're good at communicating the relevance of the work to the general public.

"And sometimes, I think, we've found in this situation a strength is not being involved in the minutia of zoning and that gives you a perspective on the work and how it's relevant to the general public," Libby continued.

"What Amy has done for us on a daily basis is communicate between the different entities at city hall, and to date she is off to a terrific start," Miller said.

Ruiz declined to respond on the record to the Mercury's online poll this morning showing 51% of readers feel she should resign. 39% of readers, meanwhile, feel Adams should step down.

Comments 22
Tags: Media Portland Politics City Hall Blogs
If you enjoy articles like this, please help the Mercury continue our mission of providing up-to-the-minute information, progressive journalism, and fun things to do in Portland by making a small recurring monthly contribution. Never forget: Your help is essential and very much appreciated!
CONTRIBUTE NOW