The Death of Tumblr Is Coming

The internet could be next. 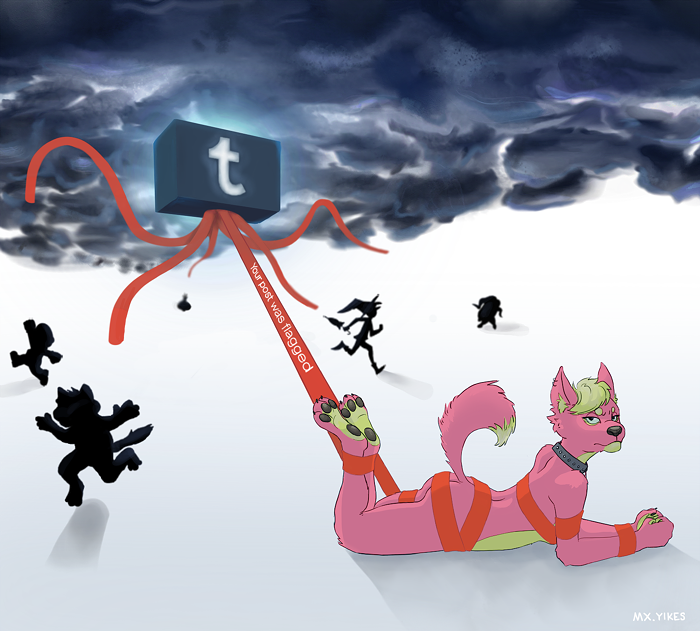 Starting today, a new adult content ban will make “images, videos, or GIFs that show real-life human genitals” or “female-presenting nipples” on Tumblr prohibited. Furry nips too. Kellen L-V
There’s this one GIF of actor Michael Fassbender’s ass that hotwired my sexual awakening. The camera panned from his broad shoulders to his narrow hips. And those back dimples. I watched the GIF loop. Over and over. The focal point of the online commentary around the GIF was this fraction of a moment where—between his lithe movements—everyone was certain they caught a glimpse of Fassy’s hanging dong.

We're not Tumblr. Shame (2011)
That was the first NSFW GIF I lingered on when I got my Tumblr account. I was 15. There would be others. Like that one from an episode of ER where a man languidly kissed down a woman’s chest. It was tantalizing, the loop restarting right as he reached the border of her panties.

Two weeks ago, Tumblr's CEO Jeff D’Onofrio said, as if to console the user base, “There are no shortage of sites on the internet that feature adult content.” But that’s not true. All over the web, sites are opting for censorship. Craigslist removed its Personals section, Facebook is banning any mention of sex, Instagram is curtailing cannabis posts, and safe online spaces for sex workers are vanishing.

“I just want it on the record that it's ridiculous that Tumblr is gonna die on the hill of ‘titties are worse than Nazis,’” Kellen L-V, a fan artist on Tumblr, told me after the Tumblr ban was announced. (Nazis and white supremacist blogs still seem to be welcome on the site.)

Tumblr's new rules aren't just bad for bloggers who specialize in NSFW content. They are also tough on artists like Kellen who draw fan art, whether it be explicit or non-explicit.

"I had about ten pieces flagged, only one of which was NSFW(ish)," Kellen said, referring to Tumblr's automatic flagging system. "One of my pieces that was flagged was a black and white print of a dog. Just a dog."

The chaos caused by Tumblr's faulty flagging has triggered a mass exodus from the site. "I've left my art blog," Kellen told me. "It became unsustainable. It seems like shouting into the void at this point."

To many users like Kellen, Tumblr's change came out of the blue. In mid-November, Tumblr was unexpectedly removed from the Apple App Store. The removal was allegedly because of a child pornography controversy on Tumblr. Instead of just banning pornography with children, though, Tumblr began quietly banning all NSFW blogs. Then, it made the guideline announcement: all adult content, not just the illegal content, would be banned—no excuses. The move seemed to be an attempt by Tumblr to satisfy Apple, a company notorious for sanitizing its content. Steve Jobs notably said that “folks who want porn can buy an Android.”

FOSTA-SESTA, those anti-sex trafficking bills passed by Congress this year, are also playing into this push from publishers to sanitize online content. The bills won't fully go into effect until 2019, but online spaces for sex workers started disappearing barely after the ink on FOSTA-SESTA was dry. That’s because, according to WIRED, “the statute also tinkered with a bedrock provision of internet law, opening the door for platforms to be held criminally and civilly liable for the actions of their users.”

Shortly after the Patreon hullabaloo, Backpage.com shuttered. Then, Craigslist personal ads were in FOSTA-SESTA's sights. One by one, places where people could safely make their living through sex work, where they could pick and choose their clientele, vanished. Their revenue channels were also stifled.

Tumblr, around February, almost as if anticipating FOSTA-SESTA, turned on its Safe Search feature for all of its users, blocking adult content by default. Users had to manually turn Safe Search off themselves. Now, months later and a month before FOSTA-SESTA fully hits, Tumblr has gone fully PG.

It's a move that recalls one of Tumblr's ill-fated predecessors: LiveJournal.

Before Tumblr, LiveJournal was the place to be online. It was a blogging site where creativity, especially fandom creativity, thrived. The site hosted many fanworks—art, fan theories, erotica (written and drawn), etc. But about a decade ago, LiveJournal was bogged down by worries that child pornography could spread easily on their site. In order to save the platform, they got in front of the problem: They banned adult content. In doing so, they signed their own death warrant. People left in droves. It was an exodus.

But LiveJournal users' search for a promised land was successful. They found their Jerusalem on Tumblr.

Tumblr has been a content-centered community with seemingly no rules since its 2007 inception. As LiveJournal faded to irrelevance, Tumblr grew. It now services around 451.3 million blogs. It’s seen a lot in its 11 years, but despite leadership turnovers, the user experience has mostly remained intact. But now? There’s no way it will be the same.

LiveJournal is now restricted by a Russian owner who recently implemented a ban on political and LGBTQ speech to comply with Russian law. It’s no good over there. Despite all the warning signs, Tumblr is still forging ahead, following LiveJournal’s missteps. The user base is preparing for the worst.

Tumblr was always unique in the way it combined discussion with sex. Blogging and reblogging, in a way, felt more personal than talking to people on, say, YouTube, Amp said. Tumblr allowed users to curate a NSFW page in an inviting way that other platforms just can’t.

“The social impact of removing sexual education—which is what we used Tumblr (and other platforms for)—means teens and adults not knowing how to protect themselves properly and how to have safer forms of sex,” Amp said. “Not having representations of sex and gender will lead to kink being seen as more ‘other’ and therefore lesser in some ways.”

"For creators who curated their Tumblr platform specifically, there isn't a replacement at the moment. Imagine building a small, cultivated, safe and cozy ecosystem—that you might have made a living on—now gone forever starting December 17," Amp told me. "This feels like the death of a platform. It might bounce back once they've regulated posting, but it'll never be the same."

This past weekend, everyone on my Tumblr dashboard was posting their goodbyes. It was sweet. This platform meant so much to so many, including me. I learned a lot from Tumblr. Not all of it was about sex, but a lot of it was about sex. It was like the big sister I never had.

Every user I come across is certain there won’t be anything left for them on Tumblr after the rules get implemented. People have spent years building these blogs and identities. There’s a certain mourning that comes with leaving that behind.

"I used Tumblr as a place to make queer friends and grapple with my own identity," Kellen told me. "Now most queer and sex-positive spaces are going quiet. It's unfortunate, and I'm hoping that they reconsider."

Users are looking at other places to move their content. Most I’ve talked to are leaving for Twitter. Others are trying Instagram. Sites like Pillowfort and Cumblr—a little on the nose?—are advertising themselves as Tumblr alternatives. Many aren’t sure. All they know is that, if these rules remain in place, there soon may not be any home for them on the internet.

FOSTA-SESTA have the potential to change the internet as we know it. Tumblr's crackdown isn't an isolated event. It's a canary in the coal mine, warning of a more censored, puritanical internet.

Tags: Media Sex
If you enjoy articles like this, please help the Mercury continue our mission of providing up-to-the-minute information, progressive journalism, and fun things to do in Portland by making a small recurring monthly contribution. Never forget: Your help is essential and very much appreciated!
CONTRIBUTE NOW