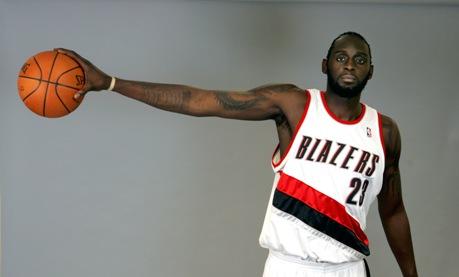 Another night, another Darius Miles bombshell. After last week's fallout over Miles, and the millions of dollars in baggage that comes with him, Yahoo has broken the news that the Blazers tried to re-sign Miles last week, after sending out their now infamous threatening letter. Can you sign a player who doesn't want to be on your team? We'll never know, since the NBA blocked the move.

So given this news-worthy situation, why the deafening the silence from the Oregonian? It's not a secret that our lone daily paper is firmly in bed with the Blazers franchise, and their coverage is usually excellent (Jason Quick is one of the premier beat writers in the NBA, blogger Sean Meagher is a lot of fun to read, and John Canzano is, well, the worst writer this side of Mitch Albom), but are they too close to the team? The paper is first on the scene when the news is good—the team drafting Oden, etc.—but when things go sour like they have in the past week, national outlets like Sports Illustrated, ESPN, and Yahoo Sports broke the stories long before the O.

In fact, days after the team tried to re-sign Miles, and before this story broke (by Yahoo, not the local paper with an embedded writer following the Blazers), the O ran an interesting—yet Miles-free story—story on the team's sleep habits, while Canzano ran a piece about a win-one-for-the-Gipper cancer victim. Not to make light of the disease that has killed pretty much everyone in my family tree, but I believe I read that column before when it was called Tuesdays With Morrie, and I hated it then. Anyway, point being, when the Miles situation was reaching critical mass—and became the top story in almost every single national media outlet in America—the one paper devoted to the team was suspiciously silent.

Barring another angry letter from management, this nightmare will pass this weekend, when Miles plays his two games for Memphis, and the Blazers' bank account gets a whole lot lighter.

Comments 4
Tags: Sports Blogs
If you enjoy articles like this, please help the Mercury continue our mission of providing up-to-the-minute information, progressive journalism, and fun things to do in Portland by making a small recurring monthly contribution. Never forget: Your help is essential and very much appreciated!
CONTRIBUTE NOW