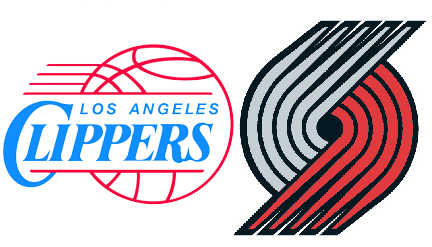 We're live from the Rose Garden as the Portland Trail Blazers welcome the Lob Angeles Clippers to town (it's time to stop all this "Lob City" bullshit? In terms of wasted nickname potential, it's on par with associating a dude who was born with the surname "Outlaw" with two different species of fish).

Last time the Blazers matched up against CP3 and the reigning president of The Sons of Tony Shalhoub (Tip of the hat to Cheston Knapp for his intrepid detective work), it wasn't pretty. Turnovers, poor rebounding, neither a half-court nor fast-break offense...and we didn't even have Andre Miller around to do this. A strong fourth brought us close, but it wasn't enough to make up for three bad quarters of basketball.

Good news: Since our last meeting, Raymond Felton's body fat has dropped to 12%. (Scratch that...I'm being told that's his shooting percentage from beyond the arc.) Still, the Blazers have put together quality wins against the Thunder and the Lakers, and, fingers-crossed, identified some of what doesn't work.

Lingering questions: Will Gerald Wallace show up tonight? Will Kurt Thomas break a hip? Will Chauncey Billups's starting position on my fantasy basketball team prove to be a conflict of interest? Follow along after the jump to find out...

Pre-Game: No big surprises in the starting lineup: Felton, Matthews, Wallace, Aldridge, and Camby on our end; Paul, Billups, Butler, Griffin, and Jordan for the Clips.

For those of you playing at home, Vegas has us by six.

Craig Smith got to the choose the warm-up music tonight, and opted for Snoop. (If you make the trip, keep us posted with Rhino sightings at Coachella). On another musical note, one of the ladies from Designing Women sang the National Anthem (I got the feeling she was in it for the attention, not love of country).

Some of you may have heard that I'm stepping down as the Mercury's food critic. Why leave such a nice gig?

11:00: Camby get the first bucket of the game on a dish from Felton, and does some kind of crouching celebration that was huge in the late nineties. 2-0, Blazers.

9:45: Aldridge backs Jordan down, passes out to Felton who swings it to Wallace. Three! Next time down: Wallace again from outside the arc! 8-2 Blazers

7:30: Clippers finally moving the ball around well. Paul dishes to Griffen, who hits a cutting DeAndre Jordan in the lane. Dunks it for two. 12-7, Blazers

6:30: The Clippers big men collapse on Wallace in the paint, but forget about Mr. Camby. Wallace dishes, and Campy shot puts the ball from eight feet out. 17-11, Blazers

4:00: Wallace and Butler trade jumpers from the top of the key. Next time down Wallace reminds the Clips what a back cut looks like. Jordan doesn't like it, and sends him to the line. Hits the first, not the second. 20-13, Blazers.

2:30: Griffin finally knocks down a shot. Not a lot of action from the Clips' marquee men tonight. Kurt Thomas checks in and counters with a two. 22-18, Blazers

1:10: Aldridge picks the ball from Williams under the Clippers basket and outlets to Felton who takes it coast to coast for a layup. We're at 24-22, Blazers.

Wallace leads all scorers with 9 (Felton has 6 assists). Griffin and Paul combine for 2 points, while Mo Williams and Caron Butler dominate the points column.

11:10: Williams gets a little cocky and fires off an off-balanced jumper. Matthews, on the other end, gets one from the top of the paint. Next time down Craig Smith hits Batum in the paint. He gets clobbered, but gets the bucket anyway. And one. 29-26, Blazers

9:00: J-Crossover earns his twitter handle, before dishing off to Batum, who swings it to Matthews. Matthews leans into Mo Williams and draws the foul. But the balls up, and in from 16. 33-28, Blazers, with a free throw coming.

CHALLENGE: Try to say "Your BLAAAAAAZER Dancers" in a creepier voice than our announcer.

8:13: Wallace runs a half marathon with the ball in his hands, but doesn't get called for the travel. Foye gets in his way and gets called for it. 37-31, Blazers

7:30: Matthews backs down Chris Paul shows off his new LA acting chops with an impressive flop. Not good enough. Matthews gets the call and the bucket. Then knocks down the free throw. 40-31, Blazers

5:15: Blake griffin gets an easy layup, but I'm not quite seeing what the hype is all about. I get the feeling that corporate America is putting in Anfernee-Hardaway-level man hours to convince us that Blake Griffin has a personality. Somebody get Lil' Penny's agent on the phone. Aldridge backs him down on the other end and we're at 44-39, Blazers

3:45: Camby throws a short lob to Aldridge, and, presumably, makes a comment under his breath about how, really, when you think about it, Lob Angles is better nickname than Lob City any day. 48-39, Blazers.

2:00: Griffin bricks another jumper from the top of the key, then fouls Aldridge on the other end, demonstrating, yet again, that All-Star voting has more to do with major markets than power forward prowess. 52-41, Blazers

0:30: Billups hits a deep three, finally contributing something to my fantasy team. True story: when I was little, I had a cabbage patch doll named "Chauncy Phillips" (which, I presume, ESPN took into account for my AutoDraft strategy, since they clearly weren't looking at FG%) 54-45, Blazers

0:2: According to Kevin Pelton of basketball prospectus (a few seats down from me) this is the first time all season Camby and Thomas have been on the floor together. Can someone come up with a good Grumpy Old Men joke on the fly?

Halftime:
Neil Pert has managed to split himself into nineteen parts and successfully made me want to die. I hate big groups of drummers.

Third Quarter:
Sorry for the delay, folks, but we're back...

9:00: Felton and ALdridge put tother a nice little pick and pop, which leads to an impressive airball from Wallace. On the other end, Chris Paul finally gets on the board with a three pointer from the corner. 58-50, Blazers

7:00: It's a different narrative from the first half. Aldridge and Griffin are just trading buckets. Paul adds another jumper to make it 64-56, Blazers.

6:00: Aldridge attempts to answer another Griffin bucket, but comes up a little short. Marcus Camby goes hard on the put back, but gets fouled by Jordan. 64-58, Blazers (free throws coming)

People here give a serious shit about Rob Mullens, Athletic Director of the UofO. We are, in fact, a professional sports backwater.

5:15. Aldridge slaps, maybe pounds, a loose ball to a wide-open Gerald Wallace at the arc. He nails the uncontested three. 67-60, Blazers

3:00: The Blazers are showing better perimeter ball movement than they have all season. Wallace swings to Aldridge, the defense collapses, and Crawford's open in the corner. Three points. 74-65, Blazers.

We're "Getting To Know Wallace" during timeout. He doesn't like nerdy shit, loves food, prefers Rihanna to Beyonce, and you're more likely to find him at a dive bar than a dance club. Apparently those were the right answers. The crowd is chanting his name really, really loud.

1:10: Caron Butler is also athletic. he flies through the paint and moves his arms into ten or twelve positions, the last of which result in a bucket and a foul 76-71, Blazers

0:00: Wallace headfakes and takes it hard into the lane. Nobody dares stop him. Mo Williams tosses up a three at the buzzer, to no avail. Going into the fourth quarter we're at 78-71, Blazers

Fourth Quarter:
10:30: No new scores, but up in press row, we just came up with a goldmine of a John C. Reilly vehicle. The Academy Award (winner? nominee?) plays Todd, the warmup-clad timeout-promotion dude. Follow his adventures as he realizes there's nowhere to go but down, and none of the Blazer Dancers want to sleep with him. Working title: Blaze!

9:30: Jamal Crawford continues to impress in the fourth quarter, a pair of free throws, a couple broken ankles, and a layup later, we're up 82-73.

7:30: Aldridge with an impressive spin move...sadly, the ball was going over his head at the time. Billups contributes a three at the other end. 82-80, Blazers

6:52: Felton goes hard in the paint (Flocka!) and Griffen does little but stand there and lean into him. Felton gets to the line, and sinks both. Mo Williams picks up a loose ball foul, sending Matthews to the line to shoot one-and-one. He nails both. 86-82, Blazers.

6:02: Camby swats Chris Paul, and Billups misses the second chance bucket. Felton spots up on the other end and and sinks a three. I love when chubby kids mug for the camera. 89-80, Blazers.

You know who has shitty handwriting? Every single motherfucking Blazer fan. What does that say? Arbitrage? Are you rooting for the ticket scalpers?

5:30: Wow...Griffin chokes from the line. Misses both, one of them doesn't even hit the rim. Aldridge just pictured himself wearing red, white, and blue. We;re at 90-82, Blazers, by the way.

3:30: Aldridge backs Griffin down to the hoop. Griffin tries out a Razzie-award-level flop, and no one buys it. Aldridge drops it in for two. Jordan knocks down two free throws at the other end. 94-88, Blazers

2:30: I've having trouble wrapping my mind around this offensive foul call. Griffin jumps in between Aldridge and Wallace, Wallace swings his arm and breathes on Griffin, Griffin falls down. The fans are displeased. Blazers lead 96-88

2:00: Jesus Christ. When did Wallace become our most reliable outside shooter? Another three. 99-90, and the fans smell Chalupa.

0:25: Chauncey Billups hits a leaning jumper from ten feet out, and draws a foul from Wallace to boot. He sinks the free throw, and the Clippers only trail by three. 100-97, Blazers. Getting tense here, but you wouldn't know it from the crowd's twisting & shouting.

0:14: Griffin tries to back Felton down to the hoop, but Felton proves too tenacious. Griffin loses it, and Brian Cook fouls Felton. He makes one of two, but manages steal the ball from Griffin yet again. This time he knocks down the pair. 105-97, Blazers

0:00: We got out-rebounded, and only came away with five fast-break points, but we shot a little bit better from the field, the arc, and the line, and did a nice job neutralizing Paul and Griffin. That was enough. Blazers remain undefeated at home with an overall record of 7-2. All five starters finished with double figures...good team play, fellas.

Comments 5
Tags: Sports Blogs
If you enjoy articles like this, please help the Mercury continue our mission of providing up-to-the-minute information, progressive journalism, and fun things to do in Portland by making a small recurring monthly contribution. Never forget: Your help is essential and very much appreciated!
CONTRIBUTE NOW 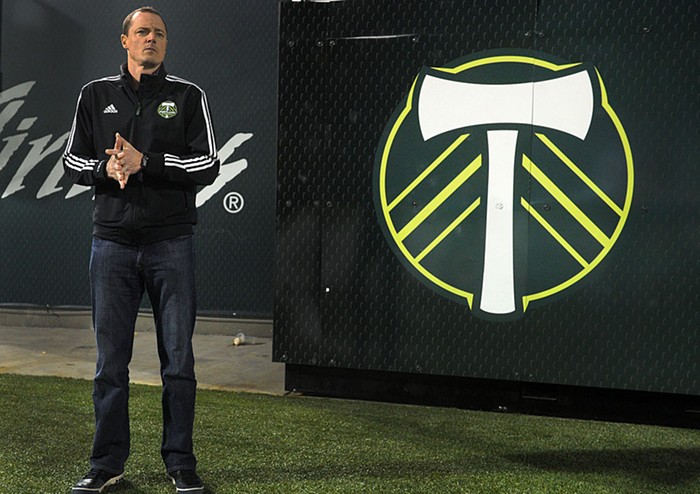