The Houston Rockets, our evil rivals from down south, rolled into town sporting the best record in the NBA and the fireworks flew Saturday night. The Blazers were looking to end their most dismal stretch of the season, a three game losing streak at home. Things started off swimmingly for the home team, with Damian Lillard scoring at will, and the Blazers led most of the way. But alas, they couldn't close it out, and James "The Beard" Harden dashed our hopes once again. The Rockets pulled ahead in the final quarter and won, 124-117, dammit. 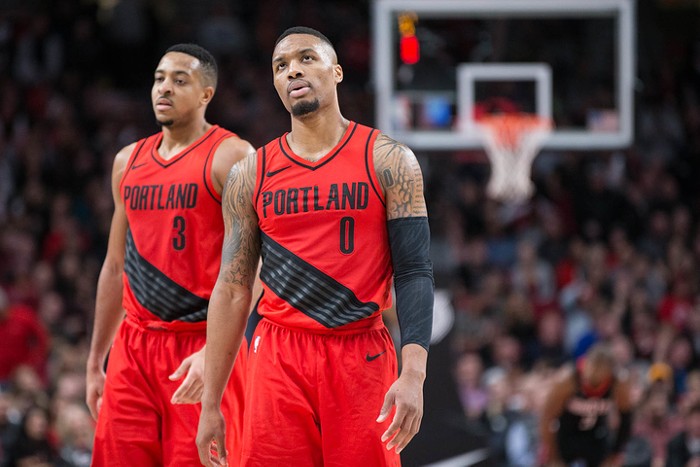 Few teams are as disliked by Blazer fans as the Rockets. Their list of grievances against the Texas team goes on and on, dating back to the mid-90s when they wooed superstar Blazer Clyde Drexler away to join one of the first NBA superteams with Hakeem Olajuwon and Charles Barkley. These days the Rockets are known as floppers and whiners, with all-star guards James Harden and Chris Paul leading the charge. Unfortunately those two floppers are also really good players and the Rockets currently sit in first place in the West. The Blazers weren't expected to give them much of a game, but hey, the hometown boys came out swinging. Lillard ended the game with 38 points and a franchise record 9 three pointers. But it wasn't enough to down the Rockets.

The game was tied at halftime, a pleasant surprise for most fans. Here's a sampling of the fan action in the hallways during the break:

These two live in Portland but are...Rockets fans? Asked how this happened, they explained they moved here 9 months ago from New Jersey. Okay, but that doesn't mean you have to root for The Beard, man!

These two were at "a onesie party" right before the game and just hopped on over without changing: I spotted this dude walking around with a self-designed Spurs/Blazers jersey. He'd designed it to show allegiance with former Blazer Star Lamarcus Aldridge, who left us for the Spurs. Turns out I wasn't the first sportswriter to notice this guy. The Oregonian did an article on his shirt a couple years ago.:

Alright, back to the game. Experienced Blazers fans expected some kind of breakdown in the third quarter, but the Blazers held tough and even stretched their lead to 14 in the early minutes of the fourth. But then the Rockets went to a small line-up and suddenly the Blazers couldn't keep up. Lillard sprained his ankle and during his absence the Rockets cut into the lead. You could feel the air getting sucked out of the arena as the Blazers lead dwindled down to 5, then 4, then 3...and with three and a half minutes to go in the game, the Rockets took the lead. Ugh.

Frustratingly, it was lay-ups which did the Blazers in. Time after time either Harden or Chris Paul shuffled past their Blazer defender and waltzed to the hoop. Big man Jusuf Nurkic was out for this game and perhaps would have helped with the interior defense. Anyway, the Rockets pulled away and outscored the Blazers 40-19 in the final period. It was a tough gut punch for a team that is already a feeling a little low. With this loss the Blazers have dropped four straight, all at home, a bitter pill to swallow indeed.

I'm not a Chris Paul fan, though I will admit he's a good player. I also had to admit he seemed like a nice guy as he was spotted giving this kid his shoes and jersey after the game. The sign explains why he did it. The kid and his friends were crying and hugging each other after it happened. It was pretty sweet, but screw the Rockets all the same.

The Blazers play the world dominating Golden State Warriors on Monday in Oakland. If they win that game it would be a crazy upset, but this team has a lot to prove right now and beating the champs would sure be a nice move towards redemption.

Arthur Bradford has written two books (Dogwalker and Turtleface) and directed several films, including the Emmy-nominated Six Days to Air. He lives in Portland and co-hosts a live call-in radio show Sex, Drugs, and Basketball on Thursdays, 8-9 pm on XRAY.FM.
If you enjoy articles like this, please help the Mercury continue our mission of providing up-to-the-minute information, progressive journalism, and fun things to do in Portland by making a small recurring monthly contribution. Never forget: Your help is essential and very much appreciated!
CONTRIBUTE NOW