Truth Be Told–The Fight For Women’s Professional Soccer focuses on former Thorns coach Paul Riley and other scandals that rocked the league. 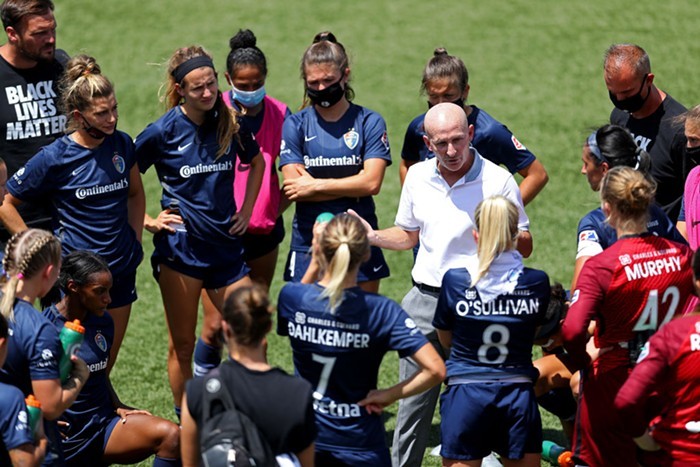 A moment that fans of women’s soccer have been waiting months for is fast approaching: the release of ESPN’s Truth Be Told – The Fight For Women’s Professional Soccer.

It’s been an unexpectedly long wait to see the documentary, which offers a comprehensive look at the scandals that rocked the National Women’s Soccer League (NWSL) last fall. Its release was initially slated for July, but was then pushed back to “to allow additional production and reporting time.” It's now set to premiere on October 4 on ESPN.

Fans of the Portland Thorns will find few revelations, but plenty worth watching. Much of the first half of the documentary focuses on Paul Riley, the former Thorns manager who was accused by multiple former players of sexual misconduct and coercion in an article in The Athletic that jumpstarted a league-wide reckoning into the power structures putting players at risk.

The anchor of that portion is former Thorns player Mana Shim, who accused Riley of coercion and inappropriate conduct during the 2015 NWSL season.

Before Shim takes center stage, however, the documentary reviews the development of professional women’s soccer in the United States—tracing the rise and collapse of the two leagues that preceded the formation of the NWSL and the extraordinary power imbalances that defined work in a profession where scores of players were paid poverty-level wages and forced to work without significant labor protections in the name of keeping costs low for owners.

That power imbalance created opportunities for people in positions of power to exploit players, which is exactly what Shim, former Thorn Sinaed Farrelly, and others accused Riley of doing.

“Paul used his power to tell you that if he wasn’t involved, you wouldn’t be where you are or make it to where you want to be,” Merritt Mathias, who played for Riley with the North Carolina Courage, says in the documentary.

Much of what is recounted in the documentary will be familiar to supporters who have closely followed the Riley story since it broke last year. Shim recounts that the manager was controlling to the point of asking about players’ weight and personal lives; that on one occasion, he invited Shim and Farrelly back to his Portland apartment after a night out drinking and coerced them into kissing on the promise that the team wouldn’t have to do an upcoming fitness drill.

“I didn’t want one moment of saying 'no' to be the reason I didn’t play in a soccer game,” Shim says.

The breaking point for Shim came on a subsequent road trip, when she said that Riley invited her to his room late at night to watch film. When Shim opened the door, Riley was allegedly dressed in only his underwear.

Shim left Riley’s room and shortly thereafter notified the club about Riley’s conduct. The Thorns opened an investigation and fired Riley at the end of the season, but made no public mention of the reason why he was being dismissed. He was soon hired by another NWSL club, the Western New York Flash, while Shim’s career would soon be over.

“It was offensive,” Shim said of the club’s handling of Riley’s dismissal. “They weren’t going to say anything about Paul unless they had to, because it was at their expense. It made them look bad.”

The documentary does not delve into any further detail about the Thorns’ handling of the situation, nor does it discuss the fallout in Portland. Indeed, while the documentary features extensive interviews with Shim, former NWSL commissioner Lisa Baird, and former Washington Spirit manager Richie Burke, the voices missing will be just as notable to Portlanders.

Portland Thorns owner Merritt Paulson and president of soccer Gavin Wilkinson both declined to be interviewed for the documentary, as did Riley himself. Not a single current Thorns player was interviewed for the piece, either. A spokesperson for the Thorns did not respond to a request for comment on this story.

The club’s leadership has consistently been reticent to speak publicly about how it handled the allegations against Riley over the last year, citing the constraints of ongoing investigations.

That reticence has frustrated numerous supporters, particularly as Wilkinson retrenched himself as the club’s top soccer official and the club’s President of Business Mike Golub retained his job despite being accused by ten former employees of inappropriate workplace conduct.

But the club’s stance may change in the coming weeks. US Soccer is set to release the results of its investigation into the league in October, which could theoretically free the club to be more transparent about its handling of Riley.

On September 19, Paulson met with members of the 107 Independent Supporters Trust Board that represents Timbers and Thorns supporters to address questions about its handling of the Riley scandal and the club’s culture. In a statement released earlier this week, the board wrote that “most left the meeting [with Paulson] feeling that the conversation was productive.”

“We have asked the FO repeatedly to be fully open and transparent about events and the investigations, and there was recognition that beginning to repair the relationship with the community will be easier to do in the coming weeks,” the board wrote. “Paulson acknowledged the damage done and apologized to the room, which is a step forward.”

The board also wrote that it feels the club’s leadership has been receptive to its concerns in the last year, even as it reported that 81 percent of its members who responded to a survey earlier in September want the group to increase the pressure it is applying to hold the club accountable.

Investigations by the NWSL and NWSL Players Association remain ongoing.

The documentary ends on a triumphant note, noting that the league has not only survived in the face of last fall’s reckoning, but has, by a number of metrics, taken hugely significant steps forward in the last year: reaching a collective bargaining agreement that included a 160 percent increase to the league’s minimum salary, free agency for players with six or more years of service, and adding two highly successful new clubs in Los Angeles and San Diego.

Still, with so much left to resolve and so many unwilling to take responsibility for their roles in the crisis, that conclusion feels incomplete. Reporter Lisa Salters’ interview with Baird, who served as commissioner of the league from 2020 to 2021 and defends her handling of the Riley allegations, is in this regard memorable.

Burke too presents himself as a victim of “cancel culture” and expressed little remorse for engaging in conduct that forced multiple players to leave Washington and some to leave the game entirely.