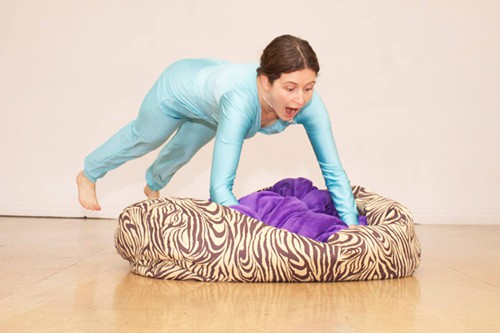 Longtime Hand2Mouth Theatre performer Faith Helma's ode to personal failure, I HATE POSITIVE THINKING, was an unexpected delight at last summer's Risk/Reward festival of new performance. Helma's infectious, tongue-in-cheek effervescence is best embodied by what she calls the show's "icon," a turquoise jumpsuit worn with pride as she shares her disillusionment with the woo-woo self-help industry—even as she identifies a route to personal growth in the act of fully embracing failure.

The performance, which Helma will present as part of this year's Fertile Ground festival, originated with the birth of Helma's son, which she says caused her to reevaluate the more grueling, physically risky performance art she'd been making up to that point (e.g., standing inside a ring of actual fire), and to consider approaches to making work that still had high stakes—but in an emotional rather than shock value-oriented sense. The possibility of failing is, of course, a huge fear for anyone who makes anything for an audience. But it's often a necessary first step if you want to make anything of value.

"I don't think you can make the fear of failure go away," said Helma when we met over coffee to talk about how something so frightening to the type-A artists of the world could be reimagined as a kind of gift. Nonetheless, Helma says she's interested in embracing failure for what it is: one way of learning. As demonstrated in her Risk/Reward performance, this is a weirdly inspiring sentiment—think Samuel Beckett meets Mr. Rogers meets Dear Sugar, with a dash of Martha Rosler. And really, it's a fascinating question: What would the world look like if instead of feeling ashamed, we could be perversely proud of the dumbest shit we've ever done?

"Ever tried. Ever failed. No matter. Try again. Fail again. Fail better," Beckett once said. It may be that Faith Helma fails best of all.

Tags: Theater & Performance Artsy Blogs
If you enjoy articles like this, please help the Mercury continue our mission of providing up-to-the-minute information, progressive journalism, and fun things to do in Portland by making a small recurring monthly contribution. Never forget: Your help is essential and very much appreciated!
CONTRIBUTE NOW