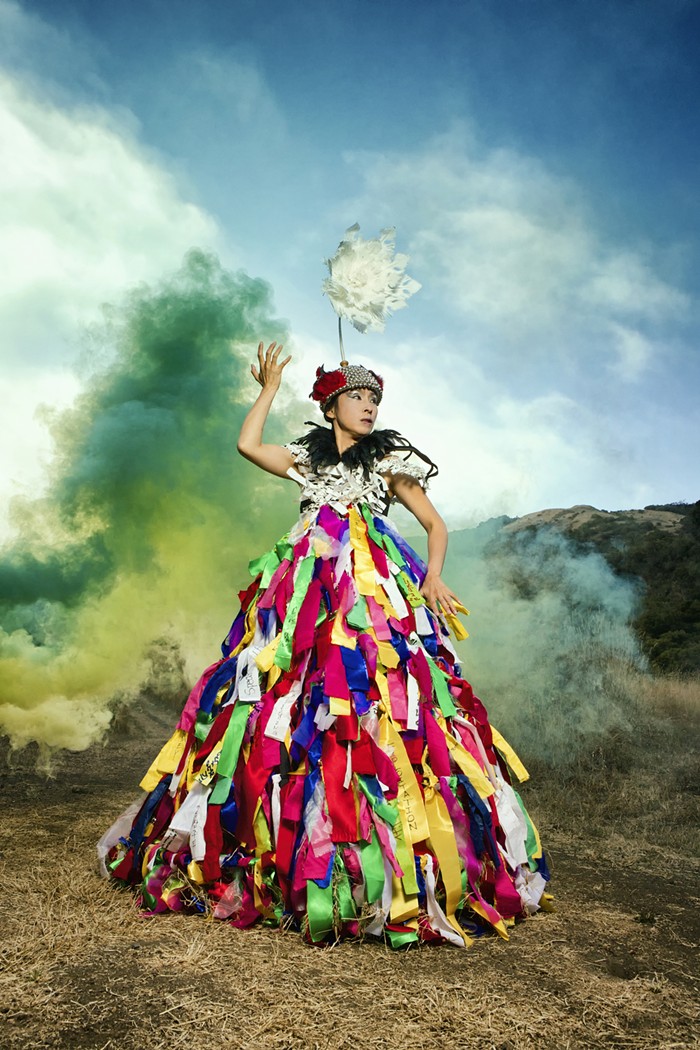 Lee is influenced by indigenous Korean shamanism, a female-led form of spirituality that has survived for thousands of years, despite the best efforts of Confucianism, Christian missionaries, and Japanese colonists to stamp it out. The practice was even outlawed in Korea in the 1970s. Its continued practice is one of both spirituality and resistance.

Lee, who was born and raised in South Korea but now lives in Oakland, takes the idea of MU (shaman), and builds on it. Using small handgrips, Lee can wirelessly alter her audio, with each flick of a finger hitting a different level or loop. Combined with her drumming, vocals, and movement, it’s riveting to take in.

Toward the middle of MU/巫, Lee emerges in an incredible hoopskirt of many fabrics (her costumes are works of art in themselves) against the backdrop of a decimated forest. She engages a variety of vocals, playfully inhabiting different voices. Using the magic of her invisibly wired hands, she builds up a cacophony of sound, until one woman on stage has filled a theater with the voices of thousands.

For the final leg of the journey, Lee emerged to the beating of a powerful drum, dressed in another radiant outfit. Swirling in a skirt of colors and bells, she rollicked across the stage, her voice more powerful than ever.

Then, for the first time, she addressed the audience directly. As the drumming continued, words and feelings undulated through her. “The mountain is on fire,” she said, with genuine distress. “Villages are under water.” We all knew what she meant. She spoke to us as a performer on stage, but she was also channeling something much bigger.

Now backed by about a dozen (local) artists with drums, she came out to the audience as the beat continued to build. She moved off the stage, energy filling the Winningstad Theater. “Stand up,” she continued to implore us. “You have to stand up, to not be silent.”

Back onstage, still swirling, still building amid the thumping rhythm, she and her backing drums began to circle, and welcomed the audience to join. Instead of the expected hesitancy that often comes with forced audience participation, people immediately began to stream to the front and onto the stage, until it felt like almost half the theater was empty.

We circled, all to the same pulse, the stage thumping with the steps of dozens of bodies Lee had energized. “This is your community, Portland!” she said, pleased with the turnout, never stopping the beat.