TBA Review: Crying Through Glitter at the Last Critical Mascara 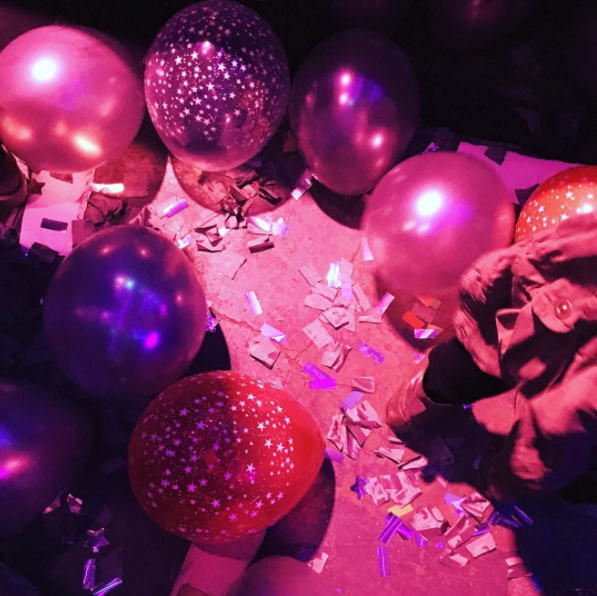 What the floor looked like after Critical Mascara. MB

I knew I was in the right place for Critical Mascara at this year's TBA when I almost walked backstage by accident, bumping into a group of gorgeous drag queens on the sidewalk outside PICA at Hancock, where they were waiting for their cue. Around the corner, the line to get in snaked out from the front entrance, per usual, and as I located the press line, I asked one of the box office staffers how things were going. "Smoothly," she said, "It's night two. Night three?" "Night three," said a security staffer as I cruised past him into the fray.

Critical Mascara is TBA's annual drag performance hosted by performance artist Pepper Pepper, and this year is special because it's the show's final one at TBA. I wouldn't have missed it. I predicted in the Mercury's TBA preview that the air of finality would mean crying through glitter, and I can't think of a more apt descriptor for what followed over the next couple hours.

TBA always draws a well-dressed crowd, and this year was no exception. I found a spot next to the runway, surrounded by fantastically dressed people, sporting cute lace shirts, blue lipstick, very '90s glittery lipstick that reminded me of my Jane Cosmetics lip glosses from middle school, and in one case, a goth-black surgical mask. A woman in a fur coat who looked like the Log Lady from Twin Peaks waited in front of me, and a dude who looked like Date Nate partially blocked my view of the stage, where DJ madison moore at one point just looped the "hot sauce in my bag, swag" line from Beyoncé's "Formation" while a group of white ladies behind me bopped to it uncomfortably.

I had just come from a friend's party half a mile away, and was mildly buzzed on homemade lemon drops. This was the perfect state for witnessing the earnest, sequined glory of Critical Mascara, which opened with Pepper Pepper taking the stage in a swoopy blue mermaid wig and explaining that tonight wouldn't be a competition. "We have a different scenario tonight," said Pepper Pepper. "A curated runway of past winners and local glamazons. They told me a thing to say but I forgot 'cause I'm high."

Pepper thanked outgoing PICA Artistic Director Angela Mattox for being "the first person to say yes," and added, "I'm very full and empty at the same time which is sexual and morose and precious just like all of you." Pepper also gave some background on the origins of vogue house culture within queer black, Latin, and trans communities, explaining that as "a white lady," while she's "a CEO in drag" she's "an intern in vogue."

What followed defies easy description—you kind of had to be there—but from Faun Dae's appearance in what looked like Carrie Bradshaw's naked dress in Sex and the City to Daniel Giron's charismatic gum chewing, each performer who took the runway brought such energy and grace that it was impossible to look away. Sugarpill spat up glitter, and we got to see Carina Borealis' self-stapling galactic drag practice. There were pirouettes and perfume dousings and high kicks in thigh-high boots. Drag clown Carla Rossi opened her set with Donna Summer's "I Feel Love," then stripped off her orangey jumpsuit to reveal black fringe and some very welcome Satanic messages projected on the screen behind her: "Burn it all down," "Decolonize yourself," "Liberate POC."

There were so many good walks, so many beautiful expressions of rejections of gender, so many straight-up amazing outfits, and an undertone of political defiance. The only time I have ever involuntarily wanted to place my hand on my heart during the National Anthem was when it was sung by Kourtni Capree. And there was even an unforgettable performance to "Short Dick Man" that included projections of short dicks throughout history, including Napoleon, Hitler, Steve Bannon, and Donald Trump. It was cathartic. I clapped so hard as a little spot in my heart filled, Angela Chase-style, which is what the best art does for us in the shittiest of times.

"I am grieving... we need more of you in the fucking world," said Pepper toward the end of the show. "It's together not alone that we are going to withstand the coming storm. You don't need my permission but you have it to go create... be with each other."

Then she burst into a performance of "Standing in the Way of Control" and the night's performers returned to the stage for a final curtain call to uproarious applause. Balloons fell from the ceiling and the runway and floor were absolutely covered in glittery strips of confetti. The show didn't end until well after midnight, with Pepper Pepper, mermaid wig thrown off at some point in the beautiful chaos onstage, telling everyone in attendance they could walk the runway if they wanted to. I have been sad about balloon drops since the election, and I can tell you I'm a little less sad now. As I left the venue, the crowd felt energized and full of palpable joy, and I thought of Pepper Pepper's words: "Pierce through the bullshit and find the love, honey."