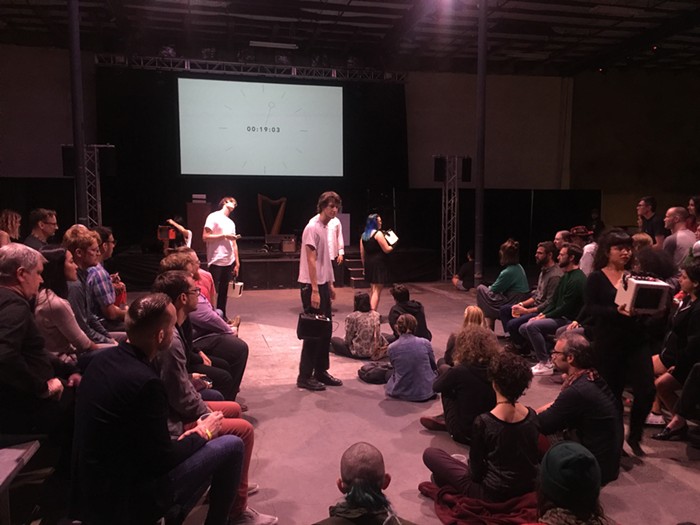 One of the best sources for experimental sound art in Portland these days is the humble but beautiful label Sounds et al. Run by British expat Andrew Fry, the imprint has released only a small number of records in its short existence, but each one is beautifully packaged to complement the mind-expanding music within. A showcase at this year’s TBA seemed not only inevitable but necessary.

Working under the theme of “Apperceptive Moment,” Fry put the spotlight on four artists, two with work his label has released (sound artists Ben Glas and Samson Stilwell) and two he’s simply a fan of (the experimental harpist Sage Fisher, who performs as Dolphin Midwives, and the theatrical modern R&B artist Amenta Abioto). As it should be, no two performances were alike, with each set taking advantage of the warehouse-like dimensions of the Works in ways large and small.

For the most part, Fisher and Abioto let the music carry the evening. The former was especially powerful as she presented a free-flowing set that drifted scattered harp melodies, the ring and scrape of a singing bowl, and her own processed vocals, one into the other. Fisher uses effects pedals and loop pedals with such care and dexterity, including turning her voice into a cavernous roar and a choir of aggrieved cherubs. There were surprises in her set, too; just as she was hitting a peak of swirling sound, wind chimes cut into the mix. Turns out they were hanging underneath the bleacher-style seating in the room, with small fans set up to put each one in motion. It was the perfect sonic adornment to an already spotless set.

In contrast to the fine but formless set that she presented at last year’s TBA, Abioto had much more focus this time around. That could have been due to the time constraints (she opened the evening with a short song and closed it with a more beat-driven set), but it helped us home in on the distinct power of her voice and her joy in playing with the sound. She set just the right tone to end the night, mixing fractured beats with small thumb-piano melodies in that arable land where gospel and soul are cross-pollinated.

Glas and Stilwell, perhaps knowing that watching two skinny white dudes standing behind their Macbooks wasn’t much of a show, opted for something a little more theatrical. Right as Stilwell started to flood the room with field recordings of nature and small clusters of noise, a gaggle of folks colorfully dressed like auxiliary members of Sun Ra’s Arkestra played a spirited game of red light-green Light. A nice touch, but it took away from the music and the images from artist Tessa Bolsover that played on a screen behind them.

What worked better was how Glas chose to fill the Works with sound. While he sat onstage behind his laptop, eight people wandered in and around the attendees, carrying small battery-powered amplifiers through which a variety of drones, pulses, and screeches played. It was gloriously disorienting not knowing where certain sounds were coming from until they were literally right next to you. It also felt something like being inside a music-triggered version of Pac-Man, the way each person was forced to adjust direction based on where people were sitting or standing.

The whole evening represented the platonic ideal for experimental music shows. Every artist took their work seriously, but there was a welcome sense of playfulness to it that kept it from degenerating into pretension. And even at its most abrasive, the music never strove to alienate the ticket- and pass-holders. Each set drew us all closer together, and often forced us to not just concentrate on our experience, but to take into account the other 200 or so people in the space. How were they dealing with a small amp blasting white noise at their chests? Did they want to join in the red light, green light game like I did? If I had the time, I would have asked each and every one.