TBA: Powerful Dancer Stares at ANTHEM, Nothing Much There in Soft Goods 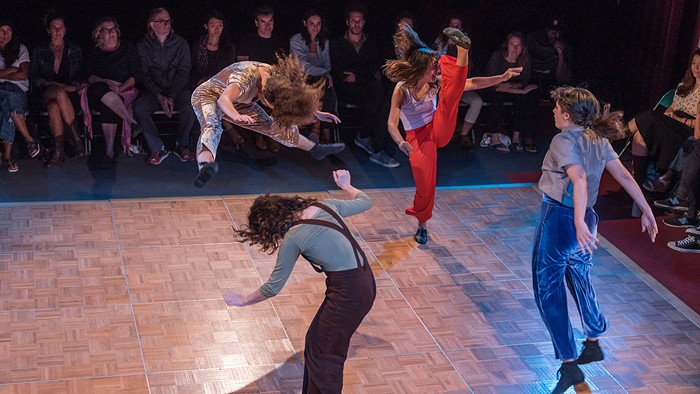 Milka Djordjevich questions that mindset in her latest work ANTHEM. The four dancers in this hour-long work are given steps and movements that play out, at times, like small dares to the audience. Are we comfortable watching the women—paired up in crab poses, one on top of the other—spreading their legs and rolling their hips upward? Where do we focus our attention when, at the beginning of the piece, their synchronized steps end with two women cupping their behinds and the others two laying their hands around their crotches?

Does it feel any less serious as the four become a tangle of limbs or spill bottles of water on themselves toward the end of the hour? Or when one dancer chews gum, snapping and blowing bubbles, as she slinks around the floor?

ANTHEM confronts these expectations of what a modern dance work can be, right down to giving the four women a chance for a water break at the halfway mark. These are details we aren’t supposed to see or react to. But there's no getting away from it. The dancers work a 14 foot by 14 foot square of parquet flooring—set centrally in the PICA space—with bleacher-type seating on each side. Everyone could see everyone else, in addition to the four women at the center of it all.

This was perhaps the most daring aspect of ANTHEM: allowing the dancers to acknowledge the people in the audience. It was nothing more than locking eyes with various people, but it knocked away the invisible wall separating spectator and performer. It was unsettling. As the piece wound down, the four women slowly danced around the edges of the square and stared down people in the crowd. When they reached my section, I hung with it for as long as I could. A dancer and I both broke into small smiles. After a bit, it became too much and I had to avert my eyes. 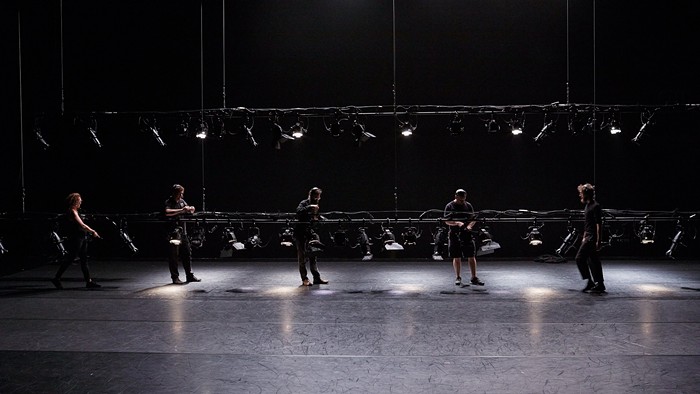 A similar quality—breaking down the unwritten, unspoken barriers separating theatergoer from the people onstage—formed the foundation of Karen Sherman’s Soft Goods, which had its Northwest premiere last night. In this postmodern work, though, the intention was to take a glimpse behind the backdrop at the machinations and details that go into putting on a play or a dance recital.

The conceit is interesting enough, but at its core, there was nothing there. Sherman attempted to make up for that lack by filling every corner of the performance with hyper-specific details from the world of theater —like giving the quintet of actors playing crew members mouthfuls of technical jargon to spout off as naturally as they could, or embedding tedious actions like getting a spotlight framed perfectly and coiling up large electrical cords. We rarely get to see that stuff, nor do we necessarily need to.

At a certain point, a trio of dancers appeared, stopping everyone dead in their tracks. There was some tension built into the relationship between front and backstage people. But it never paid off with anything other than strange playacted slap fights and gentle gamesmanship. It also left me nothing to grasp on to or really care about—not even the weirdly shoehorned-in aspect of one crew member’s apparent alcoholism. Like everything else in Soft Goods, it was just there, signifying nothing.

The sense that I got, though, was that this wasn’t meant for me—a layperson. The crowd at PSU’s Lincoln Hall was filled with folks who work in the theater and they ate up every last second of it. One gent sitting behind me, in particular, snickered through 75 percent of the show, even at innocuous throwaway things like putting a spotlight on a cart full of pipes. It felt like watching an inside joke video cut together for a film’s wrap party. If you weren’t there from the start, you weren’t going to get it.