How to Make Your Million

LAST SEPTEMBER'S FEAST PORTLAND festival was the "Who and What" of Portland food and drink, and last week's January 15 FoodWorx conference was the "Why and How." The densely packed, day-long conference saw a dozen experts explore the theme "The Future of Food?" from backgrounds in food retail, marketing, academia, and technology. Why is Portland such an important food city? What will our food and beverage industry look like in 5-10 years? How does one grow a food or drink business that can compete?

Karen Brooks, food editor of Portland Monthly, eloquently charted the evolution of Portland's food scene from irrelevant backwater burg to irreverent darling. She cited our easy access to "the best forests and farmlands in America," a pervasive philosophy that one can make something out of almost nothing here, and our humble economy. When the latest wave of food obsession swept the US a decade ago, Oregon chefs took that momentum and crafted a local style of food that suited a customer base who expected to eat well but had little interest in, or funds for, fine dining. Now the nation sees Portland as an epicenter of sincerity, purity, and down-to-earth living—a highly marketable ideal that makes Portland a mecca for like-minded people.

Erik Wolf, executive director of the World Food Travel Association, echoed these points, and also cited his own research, which shows that "food travelers" tend to be younger and less wealthy than one might assume (AKA Portlanders).

How to Start a Food Business in Portland

I'd like to see David Howitt, founder and CEO of the Meriwether Group, compete in an inspirational-speaker cage match with Tony Robbins—largely because I would like to purchase Robbins' severed hands at the end. Howitt's engaging approach to building a business is rooted in the universal myth model of the hero's journey, a time-honored metaphor he uses for the entrepreneurial process. How does that play out? In a nutshell: Start with the desire to change the world, heed your calling, and follow your path. Sound fluffy and new age? Sure, but it's a highly portable framework that, 9 times out of 10, beats cracking a tallboy dressed in your underpants and calling it quits.

Howitt also advises aspiring entrepreneurs to create a "disruptive" business, one that either creates a new category or creates a revolution in an old, complacent category. The former: Oregon Chai, a first-to-market beverage that established chai in the Western world. The latter: Dave's Killer Bread, whose superior organic bread comes with the founder's hard-to-forget story of meth and redemption.

Portland, a culinary bellwether, is far ahead of the curve in terms of such feel-good, catchy concepts as locavorism, farm-to-table eating, and ecological and social responsibility. This is hardly news, but these are distinct areas in which businesses will compete for public favor. From Craig Ostbo, principal at Koopman Ostbo Marketing Communications, came the assurance that a new business can be founded on both capitalistic and socially beneficial principles: He points to Bob Moore of Bob's Red Mill, who seems to have given his employees everything but his charming cap (including his company).

Following crop innovation trends is another way to start developing a future-ready product: Morrissey identified gluten-free quinoa and natural non-sugar sweeteners such as monk fruit and stevia as items with rapidly growing popularity.

Then there's future-proofing your business by diversifying as markets change. Steve Jones of Cheese Bar notes how cheese shops now also need to offer prepared food in order to stay afloat, and points out that he also aggressively markets his wares: His cheeses are branded on the menu in 30 local restaurants, he caters, he teaches classes at breweries and wineries where his product is complimentary. Alison Dennis of Portland State University's Center for Global Leadership in Sustainability advises decoupling future growth from scarce resources, illustrating Nike's efforts to re-use materials, which not only makes them appear progressive but also saves them money. Clare Carver of Big Table Farm advised startups to start small, "because you're definitely going to make a lot of mistakes in the beginning. What if you invest $100,000 in a farm and realize that you hate goats?"

FoodWorx, like Feast before it, confirmed Portland as a nerve center in the worldwide food conversation. Working in food here, now, is something like being in Silicon Valley at the birth of the microchip, and the future seems wide open for shaping. 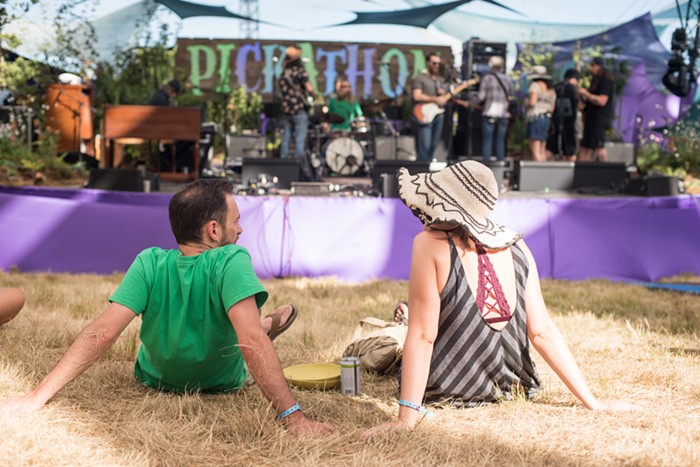