Pictures of the Moon with Teeth: TBA's Visual Art Tackles Spirits and Space

TBA is over halfway through, but you still have plenty of time to catch their visual art component of the festival, which runs through October 11. Pictures of the Moon with Teeth tackles the “spirit," playing with scale and expectation. The work that fills 2500 NE Sandy comes from 10 different artists, but shares a common thread of a monochrome color palette, and the concrete industrial venue asserts its smooth, even gray over much of the it.

The pieces are spread throughout a large space (20,000 square feet) and you're left to your own devices as to how to navigate it. The experience feels adventurous, and also a little confusing at times. The first piece to the left of the entrance is by Dawn Kasper. Encountering her piece is like stumbling into a garage after someone’s band practice: There are bells on the floor, records and tapes, a drum set, and incense strewn around. You’re asked by the gallery attendant not to move anything, because it’s how the artist wants things. (Kasper has shown at places like the Whitney Biennial in 2012, where she converted the museum space into her own studio.) 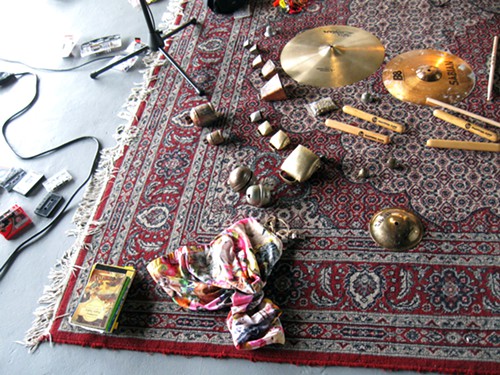 Moving further back, you’ll see Peter Simensky’s video piece, as well as a pile of emergency blankets in the corner. That stack of gold blankets recalls artists like Felix Gonzales Torres (who piled clothes and candy in gallery corners), and who, like Simensky, was an artist thinking about ideas around "dispersion"—how a person participates with art that’s in a gallery, and so on. (During the opening, people walked around and outside the gallery with the blankets on.)

One piece that really grabs you is Tannaz Farsi’s “And Others.” Text from Bertolt Brecht blinks on a board: “Some are in the dark and others are in the light we see them in the light in the dark we do not see them.” The text flashes on and off pristinely, but walking around to the back of the piece, the wires for the LEDs are exposed and filleted, giving away the messy artifice of the sophisticated piece. The quote is a translation from The Threepenny Opera, which is itself a satire of bourgeois society in 1920s Weimar Republic and of capitalism. This is a work that’s about politics and power, that’s about light, that’s about shifting your perceptions. As the piece blinks out these letters, it delays the message to your brain and subverts your expectations.

In the back of the space is a collaboration from Morgan Ritter, Karl Larsson, Pascal Prosek, and Container Corps. The piece has its own room and the most light in the entire building. Against the wall, there's a copy machine. There’s also a giant coat hanger in the middle of the floor, and a large gray hand perched on its fingers. There’s a tiny reference to Edvard Munch’s "The Scream" painted on a small stick that pokes out of ceramic. 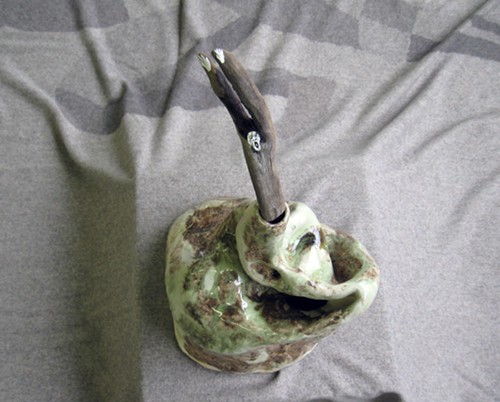 To the right of this room is Bill Jenkins’ piece "Apertures." It plays with tarps and ducts to control and bend light in interesting ways. It takes some time to warm up to a piece like this: You wander around the dark room until your eyes adjust to the darkness, and can see the subtleties of light. Jenkins works with consumer materials by taking them out of context, and making you reconsider them as art and design objects.

In much of the work in Pictures of the Moon, I found entry points into the pieces difficult to find; I wasn't sure how to engage with them, which I think is a result of the overwhelming space of the venue. I wonder if Pictures of the Moon with Teeth would be best experienced during the reception, where there is an energy, and where there are people to share the experience, to fill up the huge space where the art's housed. Visiting the exhibition in the middle of a weekday feels a little ghostly and empty; the building is just so big that it swallows the work. I also wish there was a little more wall text, essentially road signs, to both guide you through the venue and to serve as an entry point for the work. Aside from these things, if you’re willing to really look and take some time with this show, and look at the artists’ work beyond it, there's a lot to get excited about, and artists you’ll want to keep an eye on.

Tags: Artsy TBA Blogs
If you enjoy articles like this, please help the Mercury continue our mission of providing up-to-the-minute information, progressive journalism, and fun things to do in Portland by making a small recurring monthly contribution. Never forget: Your help is essential and very much appreciated!
CONTRIBUTE NOW