"You call it terrorism. I call it patriotism": Jeremy Christian's Arraignment Was Raucous 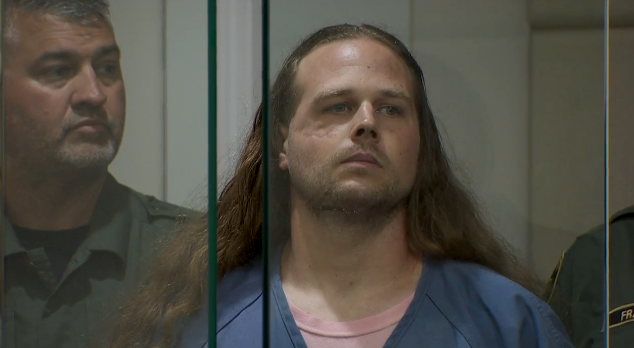 At a brief and chaotic arraignment on nine felony and misdemeanor charges this afternoon, the suspect in the vicious stabbing deaths of two men and serious injury of a third last week entered the court room shouting.

"Free speech or die, Portland," yelled Christian, 35, staring down an audience that included Micah Fletcher, whom police say Christian stabbed in the neck on a MAX Green Line train on Friday. "You’ve got no safe place. This is America. Get out if you don’t like free speech."

A short time later he yelled: "Death to the enemies of America. Death to antifa [anti-fascists]. You call it terrorism. I call it patriotism. Die."

Around the time Christian appeared in court, shouts erupted from the hallway outside. Some of that was people reacting to the man's appearance, but other anger was aimed at a man with multicolored hair and red laces in his boots who'd shown up to support the defendant. He said he was a friend of Christian's, but wouldn't answer the Mercury's questions about how he knew him. He was shouted out of the justice center under the protection of the sheriff's office.

A friend of Jeremy Christian showed up to his arraignment. People chased him out. pic.twitter.com/d3uMhUlU0S
— doug brown (@dougbrown8) May 30, 2017

People watching Jeremy Christian proceedings from outside courtroom. Yells of MURDERER as he appeared through window. pic.twitter.com/0XOqOnm5GV
— doug brown (@dougbrown8) May 30, 2017

Later in the hallway, about a dozen people watched a live stream of arraignment. As they spotted Christian through the small circular windows on the two double doors, they yelled "YOU'RE A MURDER!" at the unrepentant killer. Sheriff's deputies came out and forced them back.

Christian's next court date is scheduled for June 7.

Doug Brown contributed to this report