TBA Review: They, Themself, and Schmerm Puts On a Delightful, Humorous Show About Abuse and Gender Transition 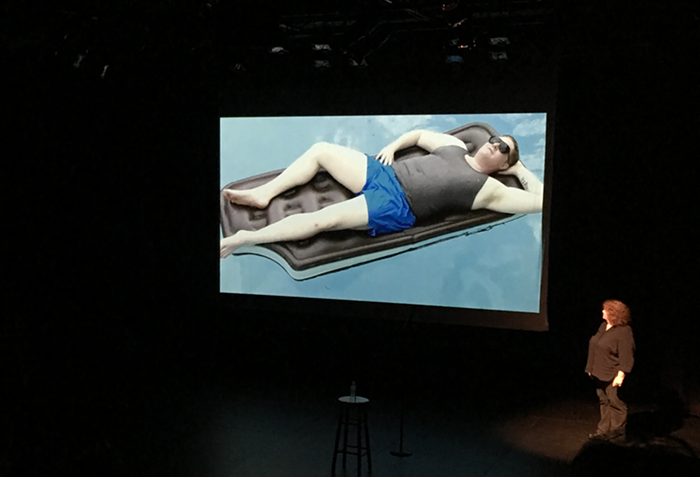 Before Becca Blackwell's show began, we in the audience were asked to raise our hands if we’d been to a TBA performance before, and again if we’d been to an Artists Repertory Theater performance, and finally if we’d seen a Frontier series performance before. It was due to these combined efforts that Artists Rep was able to host They, Themself, and Schmerm, trans actor/writer Blackwell’s one-person show about drug abuse, childhood molestation and their gradual discovery of their trans identity. And that ended up being important later.

“This is not the story of trans people,” Backwell said adamantly during the performance. “This is Becca’s story.” They paused, adding emphasis: “Not all trans people were molested.” Blackwell broke into a gossipy aside at the expense of people who think all trans persons have been molested, saying, “Oh, I’ve heard about that.”

Humor is the main tool Blackwell employs and most of the show (which—confidential to those trying to pack their TBA schedules—started late and ran overtime) had the audience rocking their seats with laughter. They, Themself, and Schmerm is a patchwork of side-splitting first-person narratives, and Blackwell absolutely knows how to comically pace a story—for instance, the climbing intensity of trying to help a niece extricate a coin (from inside her body) in a prison bathroom.

They, Themself and Schmerm opened with a short film intro, a direct parody of Corey Haim’s 1989 straight-to-video documentary Me, Myself and I. Blackwell recreated shots of Haim floating in a pool but instead of floating sensually on an alligator, Blackwell floated sensually on an ice cream sandwich and then boyishly pretended to eat it. It was a mixture of caricature and loving emulation. Blackwell wrote in their artist statement that they discovered Me, Myself and I in 2014 and felt the film spoke to them in an usually strong way. It isn’t just that Blackwell and Haim both charm on screen or that they share cool, masculine looks. Me, Myself and I resonated with Blackwell because Haim was a survivor of childhood sex abuse, he was an actor, and due to drug abuse, he eventually died. None of those details made it into Haim’s puff-piece documentary. Instead, Haim shows off his prowess at sports, poses in Tiger Beat-esque outfits, and insists he‘s not using drugs. Despite the documentary’s name, very little of him truly appears. It’s important to note the contrast in Blackwell’s response and that with They, Themself and Schmerm Blackwell attempts to do the opposite, to delve deep into their trauma. But They, Themself and Schmerm wants to do that delving between arm curls and conversational wall-leaning. Blackwell’s piece seems to ask if an exploration like this can be funny. Can all this happen in an hour and can the person at the center still be cute and casual?

My notes on whom Blackwell reminded me of—Conan O'Brien, Louis CK—perhaps betray my own tendency to stereotype gingers but Blackwell acts with their whole body and turns on a comedic dime—plunging from hilarity to stark reality. The sudden transition from an intense and morally ambiguous story about Blackwell’s mother to an energetic “CAN YOU COUNT, SUCKAS? Can you COUNT?” made me jump. “I say the future is ours, if you can count!” Blackwell shouted, then realized the reference had fallen flat. They had to backtrack and briefly provide context for the speech from the 1979 film The Warriors where the toughest gang leader attempts to unite all of New York’s gangs. United, they out number the police. Portland: not as obsessed with The Warriors as Blackwell thought.

It became obvious Blackwell was trying to end on a high note and perhaps unintentionally synced up with the administrative questions we’d received before the show began. We were people from a variety of backgrounds, brought in by a variety of interests, packing a theater to see a show about surviving abuse and the trans experience. By that same measure, all of Blackwell’s experiences made them the person they are today—a person with a hilarious, insightful solo show. "Can you count?" Blackwell was saying. "The future is ours if you can count." We can add all these small things together to make something strong. It felt a little slapped-on but not untrue, and sometimes with TBA, you have to do some of the work yourself. I went into They, Themself, and Schmerm weirdly expecting Blackwell to attempt to summarize their trans experience but instead, Blackwell opens their story up until we the audience can fit inside with them.