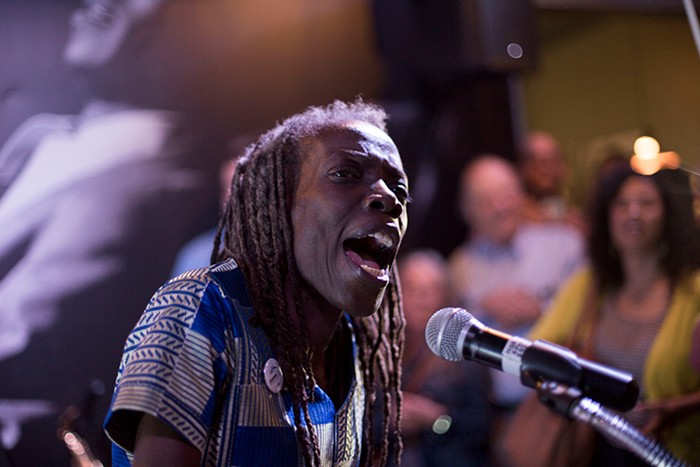 Jo Ann Hardesty, speaking truth to power. NATALIE BEHRING
Check out all of the Mercury's 2018 election endorsements! From the race for Oregon governor to the fight for affordable housing, we've got you covered.


This November, voters will make Portland history. Twice. Not only will Portlanders elect the city’s first Black woman to city council, but in doing so, they’ll create Portland’s first majority-female council. The outcome of the race to replace outgoing Commissioner Dan Saltzman is a monumental step forward in a city long ruled by white dudes. But don’t let this seemingly “win-win” election allow you to gloss over this vote. Candidates Jo Ann Hardesty and Loretta Smith couldn’t be less alike in their politics.

Hardesty’s shown interest in expanding tenants’ rights, helping create a stronger network of homeless villages like Right 2 Dream Too, and is one of the architects of Portland Clean Energy Fund, a measure on the ballot that would tax major corporations to fund renewable energy projects and jobs. Smith has championed a successful program connecting minority youth to summer jobs, but also wants to turn a former county jail into a mass homeless shelter, despite concerns from longtime experts in housing and homelessness.

We believe Portland needs a leader committed to shrinking the disparities among the city’s growing population and willing to make political sacrifices to hold Portland’s power brokers accountable.

Both women have fought criticism in their policy decisions and political beliefs. Smith has taken many of these rebukes as personal attacks, and has responded by gaslighting her opponents rather than pausing to consider differing opinions and seeking compromise. Hardesty, meanwhile, has a record of listening to critics and exploring the nuance of an argument. And in every fight, she’s put the community she represents before her self image.

This is a critical difference.

Hardesty is running for Portland City Council to give a platform to the city’s most underrepresented communities—families teetering on the edge of homelessness, parents who’ve lost children to police violence, small businesses struggling to stay open in gentrifying neighborhoods, young adults spit out by the criminal justice system, and people of color disproportionately impacted by climate change. She’s not running to propel her career forward, but to move Portland toward a more equitable, united future. We believe Portland needs a leader committed to shrinking the disparities among the city’s growing population and willing to make political sacrifices to hold Portland’s power brokers accountable. That’s why we’re endorsing Jo Ann Hardesty for Portland City Commissioner, Position 3.

“I will always admit to what I’ve done wrong."

Hardesty is the voice of criminal justice and police reform currently missing on city council. She has the experience: Hardesty was part of the group that called on the US Department of Justice to investigate if officers in the Portland Police Bureau (PPB) are more likely to use violence against people of color and those with mental illnesses. Recently, Hardesty raised concerns about a city audit that found PPB’s gang enforcement unit had been disproportionately pulling over African American drivers. She’s particularly opposed to police officers acting as responders to mental health crises, and has proposed plans to hand that responsibility over to the Portland Fire Bureau, “where their job is to save lives, not endanger them.” If elected, that’s one of the bureaus she’ll oversee.

Hardesty’s not without flaws. An investigation by OPB found that while she was NAACP president, Hardesty sidestepped procedure to pen a $10,000 check to her own consulting firm without board members’ approval or bids from other consultants. She also did not report that income to the federal government or pay taxes on it. She blames this on not knowing it needed to be reported, but it’s not a good look for someone who’ll be responsible for tens of thousands of city dollars.

In the Mercury endorsement interview, Hardesty was quick to take responsibility and promised to surround herself with smart bureau directors and budget experts to ensure she doesn’t make the same mistake. “I will always admit to what I’ve done wrong,” Hardesty told us.

Shortly after OPB’s story broke in September, Smith issued a press release announcing that Hardesty had embezzled money from the NAACP. Neither her office nor any legal officials have offered proof to substantiate that serious allegation. It’s only one example of Smith’s affinity for old-school smear campaigns. In the Mercury’s interview, Smith hinted that Hardesty may have been dishonorably discharged during her stint in the US Navy. (Military records shared with the Mercury by Hardesty’s campaign show Hardesty had been honorably discharged from active duty in 1979 before continuing in the Navy Reserve until 1984.)

We can’t have someone [in city hall] prioritizing her own reputation over what’s best for a community.

Sure, negative attacks are somewhat expected from a candidate who lost to Hardesty by 25 percentage points in May’s primary election. But this behavior isn’t just reserved for a cutthroat campaign: As county commissioner, Smith was accused of making racially charged remarks about Latinos and Muslims, criticizing a female employee for her weight, and ordering staff to use personal time to attend her campaign events. A 2017 investigation into these allegations found them all to be true, and unearthed new issues with how Smith had mismanaged her office’s finances by spending up to $2,300 on personal expenses. Smith falsely told the public that the report found all of these accusations to be unsubstantiated.

An elected official who’s quick to drop baseless accusations about opponents to improve her standing—while blindly ignoring substantiated and substantial concerns about her own conduct—has no place in our council chambers. We can’t have someone prioritizing her own reputation over what’s best for a community.