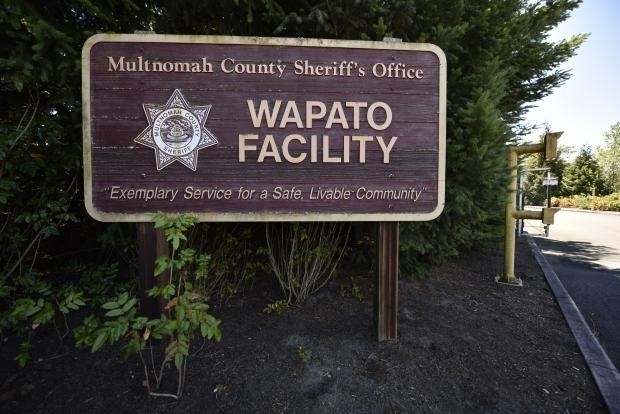 Multnomah County
This past week has seen a revived push by Portland’s police union and local developers to turn North Portland’s empty Wapato Jail into a homeless shelter. Like past iterations of this idea, the vague plan to shuttle homeless Portlanders to a mass shelter miles from the city center lacks buy-in from any public leaders, experts in homeless services, and—most importantly—the homeless community.

But there’s one thing this that gives this revitalized attempt extra teeth: It echoes solutions recently touted by the White House.

Trump complained that in California cities, people are living “in our… best highways, our best streets, our best entrances to buildings… where people in those buildings pay tremendous taxes, where they went to those locations because of the prestige.”

In a report published after the whirlwind visit, the White House encouraged cities to build more shelters and empower police to keep homeless people off the streets—ideas considered outdated, if not outright offensive, to national homelessness experts.

During the trip, White House officials met with the Los Angeles police union, where they talked about helping law enforcement move homeless people off the city’s streets and into a large shelter facility. Officials are allegedly eyeing the former West Coast headquarters of the Federal Aviation Administration as a place for police officers to relocate Los Angeles’ homeless. The building is located 20 miles from Los Angeles.

“Who is it that says that all these homeless folks have to be right downtown in the city center?” asked Portland developer Jordan Schnitzer, in the 10-minute video. Schnitzer purchased the North Portland detention center in April 2018, shortly after Multnomah County Board of Commissioners voted to sell the never-used county jail.

“[What about the] merchants downtown, who everyday come in and people are sleeping, defecating on their front door,” Schnitzer continues. “Where are the rights of the other folks in the community that are paying taxes, that are working hard, trying to make a living… There has to be a balance here.”

Schnitzer is joined in the video by three other Portland developers, PPA president Daryl Turner, Volunteers of America’s (VOA) Portland chapter director Kay Toran, a member of Montavilla Initiative (a group known for shaming people who use the county’s syringe exchange program), and one anonymous homeless person whose face is blurred.

While the city and county already fund programs that offer all these services to houseless and low-income Portlanders, the Wapato center could fit them all under one roof.

But is this Trump-ish idea the solution Portland’s homeless need? To best answer that question, it’s important to understand Wapato’s long and winding history.

“This isn’t a hit on other resources that are out there. It’s just giving people another choice.”

Wapato Jail was built for $58 million in 2004, but budget cuts kept Multnomah County from ever opening its doors. For more than a decade, local lawmakers brainstormed ways to turn the jail into something more useful for the county—while continuing to pay around $300,000 a year to maintain the building. In 2016, Multnomah County commissioned a study on the feasibility of turning the jail into a homeless shelter, and found it would cost more that $1.5 million to remodel the detention center and get it up to code.

The county decided it was wiser to spend that money on programs proven to deter homelessness, like building long term low-income housing and supporting transitional villages. In 2018, county commissioners voted to sell the Wapato property for a scant $5 million to developer Marty Kehoe, who then sold it to Schnitzer.

Despite the county’s own analysis, Schnitzer still believed the space could work as a homeless shelter. He began discussing a future shelter plan with Harbor of Hope, a nonprofit that has long attempted to construct a campus-like resource and shelter facility for homeless Portlanders. But the detention center was more costly to maintain that Schnitzer had expected. In September 2018, Schnitzer told Willamette Week that he'll demolish the place if the city doesn't rent the building from him as a shelter.

Instead, the city and county have spent the months since Wapato’s sale opening permanent and transitional housing for formerly homeless people and building a peer-run walk-in center for homeless Portlanders in the city center. Most notably, the city and county partnered with Harbor of Hope to open the River District Navigation Center, a 24-hour resource for chronically homeless Portlanders in search of permanent housing.

“I understand Jordan Schnitzer’s frustration,” said Multnomah County Chair Deborah Kafoury in an interview with the Mercury. “When [the county] owned Wapato, we spent seven years trying to figure out what to do with it. We had dozens of ideas… a business incubator site, a homeless shelter, a treatment center... it’s just prohibitively expensive.”

But, with a new promotional video (created by a conservative marketing firm famous for creating something called “The Snowflake Test”), Schnitzer’s pitch to get the homeless into Wapato has only grown stronger.

“We need leadership to… show us how we can all work together to solve this problem,” Schnitzer tells the camera. “That’s what’s missing in this community.”

PPA president Daryl Turner believes Wapato could be staffed with mental health clinicians, allowing a place for officers to drop off homeless people in a mental health crisis that isn’t jail or an emergency room.

“The video is couched as a sympathetic response to homelessness. But the plan is clearly just meant to sweep unhoused people out of the public space and warehouse them elsewhere”

While Portland already has health centers that cater to these scenarios, like Cascadia Behavioral Healthcare's Urgent Walk-in Clinic, Turner said Wapato’s capacity would allow the program to go beyond the current options.

“We could fit five hundred, six hundred people inside,” Turner told the Mercury. “There’s no other place like that in the state.”

Turner assures that a visit Wapato would be voluntary.

“We’ll just be offering a safe place for people to be while they revive themselves,” he said.

Turner has never contacted Kafoury—the region’s top decision maker in regards to mental health and homeless services—about his group’s proposal for Wapato Jail. He acknowledges the proposal includes services that are already being funded by city and county dollars.

“This isn’t a hit on other resources that are out there,” he said. “It’s just giving people another choice.”

“We support what is happening right now in the community, but obviously it’s not enough” Toran told the Mercury. Several VOA addiction recovery programs rely on funding from Multnomah County.

“We need to do more,” Toran said. “The homeless population is growing.”

A recent Multnomah County report, however, found that the region’s estimated homeless population in January 2019 was down nearly 4 percent from 2017.

“I do think that the underlying issue is that they just want the problem to go away,”

Turner said he's unsure how much a fully-funded Wapato center would cost, and will leave that "up to the experts." He said there's no specific "next steps" for the campaign now that the video's been released.

"All I know is the longer that building sits unused, the longer people are suffering on the streets of Portland," he said.

Kafoury calls the Wapato plan a “unicorns and rainbows” proposal.

“You can’t expect that one facility—wherever it is—is going to solve all of society’s problems,” Kafoury told the Mercury. While she knows some people involved in the Wapato proposal have altruistic motives, Kafoury can’t ignore what she believes is driving the aggressive campaign.

“I do think that the underlying issue is that they just want the problem to go away,” she said.

Homeless advocates and those who’ve experienced homelessness have consistently said the plan to isolate houseless Portlanders 11 miles from the city center—where the majority of homeless service providers are located—is unappealing, if not outright inhumane

“The video is couched as a sympathetic response to homelessness,” said Greg Townley, a psychology professor at Portland State University (PSU) and research director for the university’s Homelessness Research & Action Collaborative. “But the plan is clearly just meant to sweep unhoused people out of the public space and warehouse them elsewhere.”

Townley was one of several PSU faculty members who worked with the city this summer to survey Portland’s homeless population about interactions with law enforcement and general needs. From that experience, Townley said, it’s clear a Wapato shelter isn’t what homeless Portlanders want to see.

“They want a safe, accessible place where they can rest, recover, and heal,” said Townley. “Wapato isn’t that. We already have the evidence of what works, and what the houseless community wants, and we are taking steps to make that happen.”

He points to peer-run tiny home villages and mobile hygiene stations as an example.

Townley and others see similarities between the White House report on homelessness and the revitalized call for a Wapato shelter. He believes the Trump administration's rejection of housing first policies could push national housing policy back “decades.”

Kafoury shares his fear—and worries the Wapato plan to segregate Portland’s homeless in a distant facility could attract federal support.

“This is a federal government that has no problem putting kids in cages,” she said. “I have no doubt that if they had the opportunity, they would put people they consider undesirable in a jail-like setting. It is truly terrifying.”

Kafoury and other homeless service providers will speak at a press conference at 10 this morning to address the Trump administrations' "alarming new rhetoric and policy direction on homelessness."