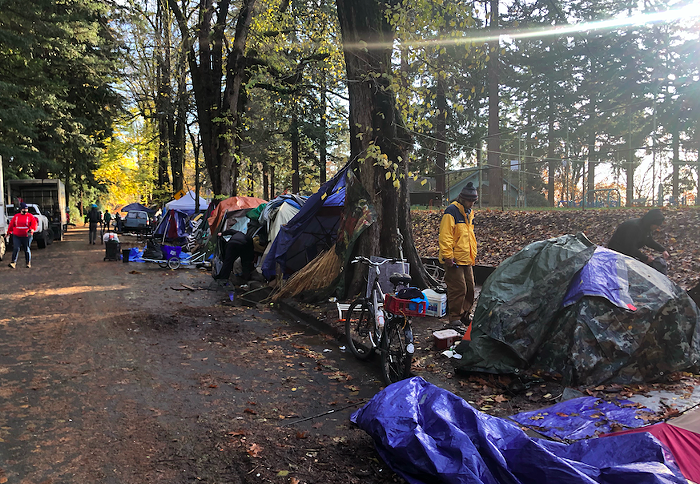 Unhoused Portlanders at a campsite near Laurelhurst Park. Alex Zielinski
Mayor Ted Wheeler is flexing his executive powers this week to restructure the city's labyrinthine network of homeless support services. In a Wednesday press conference, Wheeler unveiled plans for a new Street Services Coordination Center, a program that will act as a nucleus for the city's multi-faceted work with its homeless population.
Sponsored

"We must step up and admit, that despite our best intentions, things just are not improving as quickly as we'd like for the degree that we'd like for our homeless neighbors living outside," said Wheeler Wednesday.

While the program doesn't create any new policies or services, it intends to streamline the current programs and fast-track some of their services by placing them all under one director: Community Safety Director Mike Myers. It's a familiar responsibility for Myers—in March 2021, he was hired as the city's inaugural community safety director to help streamline the work of Portland's numerous public safety bureaus. Now, he'll be overseeing all work done by city bureaus that engage with homeless populations—whether that's Portland Parks & Recreation's park rangers program or Portland Bureau of Transportation's parking enforcement team—and making sure each department is on the same page.

In many ways, Myers' job is to navigate the impediments created by Portland’s unique commission form of government, where city commissioners serve as bureau administrators—a role that often discourages collaboration across bureaus.

At the moment, city staff who work with homeless Portlanders don't have a clear way of communicating their work between other bureaus who do similar work, often leading to redundancies or allowing people in need of help from the city to fall through the cracks. With a clear chain of command and daily check-in calls detailing the number of available shelter beds and other available services, the Street Services Coordination Center hopes to do away with the current obstructions keeping Portland's current homelessness crisis from receding.

"This is an emergency declaration intended to kick-start a long-term solution," said Myers Wednesday.

As with any emergency order, Wheeler will be required to renew this declaration every two weeks. Wheeler said he plans on renewing this order as long as it takes, and believed the new center will be fully up and running by this summer.

The new center, an idea crafted over the past year by Wheeler policy aide Seraphie Allen, was modeled after several programs that exist in other west coast cities, like San Francisco's Healthy Streets Operations Center. The program itself has already been allocated $350,000 in a joint budget package approved by both Multnomah County and the city in November 2021—yet Wheeler will be requesting additional funding during the city's upcoming budget cycle. Those additional asks will include funding to cover taxi costs to transport unhoused people to shelter and to pay for motel rooms to offer as shelter options.

The center's creation will not change the way in which the city conducts homeless campsite sweeps, yet the department in charge of that work, the Homelessness and Urban Camping Impact Reduction Program (HUCIRP) will be part of the streamlined program.

This declaration is the third executive order released by Wheeler's office in recent weeks meant to address the city's homeless crisis. In early February, Wheeler used an executive order to prohibit unhoused Portlanders from camping along busy traffic corridors, and last Wednesday, Wheeler used his executive powers to clear zoning hurdles that had slowed the development of the city's outdoor homeless shelters.

On Wednesday, Wheeler said the urgency behind these policies was inspired by the decline in COVID-19 cases (and related restrictions) paired with the warmer weather on the horizon.

"This moment is a unique opportunity we must not squander," he said. "Today's emergency declaration cuts through our antiqued form of city government to speed up better services to more Portlanders experiencing homelessness."

Myers' work will be directly overseen by Wheeler. (Importantly, Myers won't be required to follow orders issued by anyone on Wheeler's staff but Wheeler himself.)

In February, Wheeler aide Sam Adams shared a controversial plan designed to relocate thousands of unhoused Portlanders into mass indoor shelters, containing 1,000 beds each. Wheeler endorsed this idea, but suggested these shelters instead be outdoor encampments. This proposal is not part of Wheeler's current suite of executive orders.