The restaurant's owners—siblings Sirimanee and Beer Tebuteb—offered something specific on their menu: the flavors of Isaan, Thailand's northeastern-most and largest region. “Zaap” means “tasty and spicy” in the Isaan dialect, and those are two things the restaurant does in spades.

Developed by Sirimanee and her mother—from Sirimanee's grandmother’s recipes—the menu you'll find at Zaap is divided into noodles, curries, stir-fry, and other staples. Playful dishes, like pad spaghetti kee mao made with squid ink pasta, show up on the specials board when inspiration strikes.

Running their own restaurant has been instrumental in the family's creative exploration of Thai cuisine. Sirimanee personally pulled inspiration from Thailand's capitol city of Bangkok for the menu’s combos section, which pairs rice with a side like papaya salad or a fried egg and a protein—deep fried pork ribs, marinated BBQ chicken, crispy pork belly, and more.

Though the Tebuteb family hails from Thailand's Roi Et province and Isaan's influence is paramount on their menu, they also serve homemade seasoned red rice: a dish from Chamorro cuisine. Chamorro are the indigenous people of Saipan and other Mariana Islands, an area in the same US commonwealth with Guam where the siblings lived when their mother took a job in a garment factory. Made with achiote seed, the rice's distinctive color and flavor is something you're unlikely to find at any other Portland Thai spot. Spicy and sour tom yum noodle soup with seasoned ground pork. Janey Wong
Rice is a staple food in Thai culture, and Zaap serves it in many variations. Along with the option of red rice, diners can choose to have steamed jasmine rice, brown rice, or sticky rice accompany their meal. Come dessert time, an order of sweet black sticky rice arrives paired with mango or coconut ice cream.


If you want to specifically try Isaan cuisine, look no further than the khao soi, a curry noodle soup with a chicken drumstick and topped with crispy egg noodles or nam tok, a tangy beef salad with roasted rice powder. On the daily special board you might find tom saap, a hot-and-sour pork rib soup, or sai krok isan, fermented sausages made with a mixture of pork, garlic, and rice.

“If you think Isaan, you think grilled meats, sticky rice, and jao dipping sauce,” Sirimanee told the Mercury. The family makes its dipping sauce from scratch—sticky rice is toasted in a pan with galangal and lime leaf before it's pulverized into a powder with a mortar and pestle. The roasted rice powder is then mixed with tamarind paste, dry chillies, cilantro, and onions.

We ordered a spice level of three (out of five) on all of our dishes, and despite my own Southeast Asian heritage, I was feelin’ the heat. The food was still plenty enjoyable, but it definitely A) cleared my sinuses and B) had me reaching for the sweet relief of my Thai iced tea at a frequent clip. So, unless you handle the upper echelons of the Scoville scale like a champ, it's advisable to dip your toe into the lower end of Zaap’s spice spectrum. 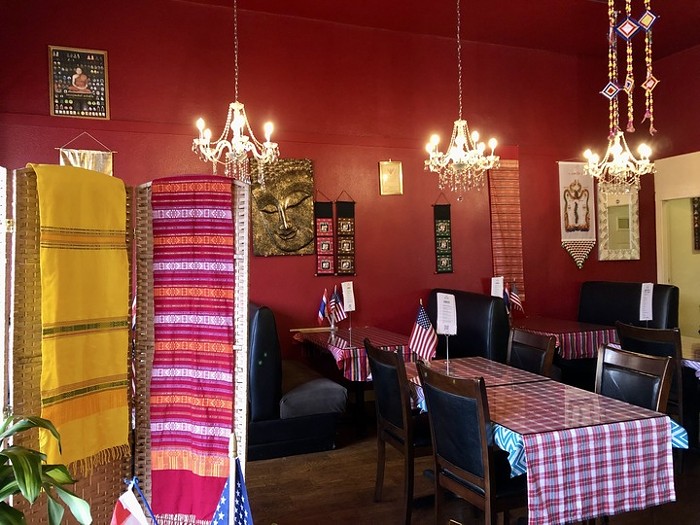 Janey Wong
As the restaurant's food tells a story of the Tebuteb family, so too does its decor. Look up behind the bar and you’ll see two shrines made out of dried and folded banana leaves. Lai Thai fabrics adorn the walls and tables. The family's uncle hand-carried these textiles from Roi Et, where they were blessed by a monk for good luck. A portrait of the very same monk hangs high up on one of the walls. “I studied with him for ten days back in 2018,” Beer explained casually.


During the pandemic, Zaap kept afloat with a brisk takeout program, but the restaurant recently reopened for dine-in service, so I’d be remiss if I didn't mention that some of the dishes don’t translate well to takeout. Sirimanee advised that their noodle and salads are best enjoyed for dine-in, since the time that elapses between making the food and eating it at home will likely turn the noodles soggy. No one likes a soggy nood!

Dine-in customers also have the advantage when it comes to the deep fried filet of fish (served on a sizzling hot plate) and even the papaya salad—"If you let it sit, it actually changes the flavor,” Sirimanee said. On the other hand, curries are excellent to take away, and will taste even better the next day.

Pro-tip for the road: There’s a parking lot out back.