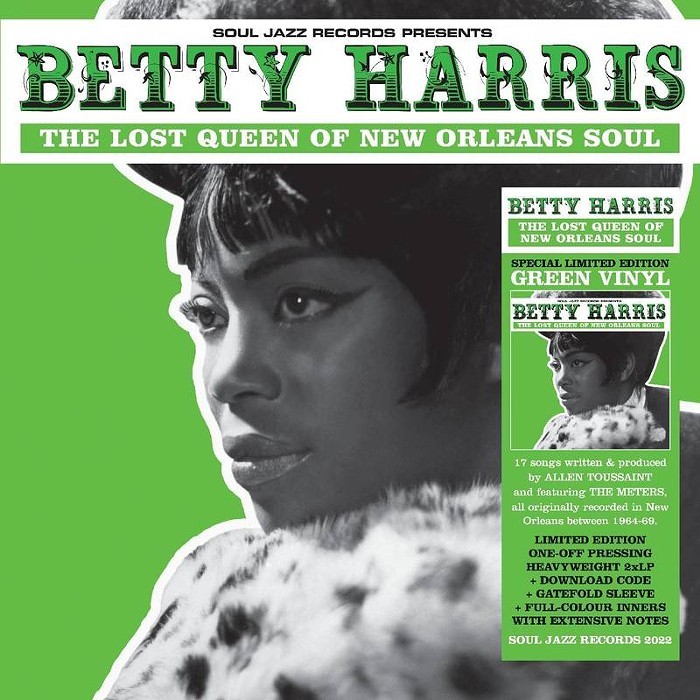 Betty Harris + The Meters + Allen Toussaint = must have. Soul Jazz Records
Record Store Day (aka RSD) returns on Saturday, April 23, and, as per tradition, enough titles of quality and distinction will hit the bins to nullify the chronic complaints about this retail booster shot (non-essential major-label reissues clog the pressing plants, egregiously delaying indie-label jobs; obnoxious flippers scoop the most coveted releases without even listening to them only to sell them at over-inflated prices; gimmicky vinyl picture discs ahoy!; yadda yadda).
Sponsored

Because I always try to accentuate the positive [cough], I present here 10 releases that you should check out and, if able, to purchase. To be sure, there are more than that deserving of your precious disposable income and time, but you aren't made out of money and I don't have all day here. RSD adds this disclaimer: “The List of titles may change. Titles may be added, titles may drop off, information may be amended.” Without further ado and in no particular order...

Soul and funk vocalist Harris actually lived in Florida, but she worked with Crescent City songwriter/producer Allen Toussaint and funk deities the Meters—geniuses all—so she was an honorary NOLA artist. This comp collects her physically and emotionally moving soul and funk 45s from 1964 to 1969, including “There's a Break in the Road,” “I'm Gonna Git Ya,” “Mean Man,” and “Trouble with My Lover.”
The Ceyleib People, Tanyet (Jackpot; 2,000 copies)

A psychedelic classic hiding in plain sight, Tanyet was often found in cut-out bins over the decades. Talk about cheap heat! Recorded in 1968 by Ry Cooder (notorious at that point for his work on Captain Beefheart's Safe as Milk), super-session drummer Jim Gordon, Wrecking Crew guitarist Mike Deasy, and Wrecking Crew bassist/keyboardist Larry Knechtel, it's a mystical, blues-raga-funk mind-expander that optimizes your trip in under 30 minutes. This review delves further into Tanyet's abundant pleasures. Karen Dalton, Shuckin' Sugar (Delmore Recording Society; 2,000 copies)
A revelation for fans of American folk-blues singer/guitarist/banjo player Karen Dalton, Shuckin' Sugar contains live recordings from her circa 1963, including seven previously unheard songs and duets with Richard Tucker. This LP offers a rare glimpse into Dalton's artistry six years before her 1969 debut album, It's So Hard to Tell Who's Going to Love You the Best. Her voice here hadn't yet taken on the tics of Billie Holiday and Bessie Smith, but it's no less moving for that. Suffering from commercial failure and substance abuse, Dalton died in 1993 at age 55 from an AIDS-related illness. Seattle label Light in the Attic did much to revive interest in her career in the '00s with reissues of It's So Hard... and 1971's In My Own Time. The Jackson 5, ABC (Anagram; 6,500 copies)
Pure, youthful Motown joy from Michael and the Gary, Indiana bros. At its best (the title track, “The Love You Save,” “2-4-6-8,” the cover of Funkadelic's “I'll Bet You”), ABC represents some kind of zenith for bubblegum soul and funk. Most copies of ABC that you see in used bins are beat to hell, so praise be for this reissue. Nico and the Faction, Camera Obscura (Beggars Banquet; 1,500)
Produced by fellow ex-Velvet Underground band mate John Cale, 1985's Camera Obscura stands as one of the German singer-songwriter's most sonically rugged releases, often bleeding into the harsh industrial realms of Throbbing Gristle, Severed Heads, and the Normal. It was her final album and a fittingly enigmatic end to a largely uncompromising music career (as fine as it is, Chelsea Girls is the anomaly).
Bruno Nicolai, La Dama Rossa Uccide Sette Volte (The Red Queen Kills Seven Times) (CAM Sugar 2xLP; 1,500 copies)
A 50th-anniversary reissue of this classic giallo soundtrack by Bruno Nicolai, the Italian film composer who frequently collaborated with Ennio Morricone and whose work appeared in Quentin Tarantino's Kill Bill: Volume 2 and Once Upon a Time in Hollywood. La Dama Rossa Uccide Sette Volte showcases Nicolai's dulcet melodic touches and his knack for sinister atmospheres, often within the same piece. This reissue contains two bonus tracks. Sandy Denny, Gold Dust Live at the Royalty (Island; 4,500 copies)
This LP captures for the first time on vinyl the queen of British folk rock's final concert before she passed away in 1978 at the tragically young age of 31. It serves as a sterling career overview, with songs from Denny's solo albums, and from her groups Fairport Convention and Fotheringay. She's backed by an excellent players such as FC drummer Dave Mattacks, Fotheringay guitarist/vocalist Trevor Lucas, Jerry Donahue, and Pat Donaldson and her voice bears a regal majesty that makes these songs sound as indestructible as they are gorgeous. Howard Wales, Rendezvous with the Sun (Luv N' Haight; 1,000 copies)
This is my Holy Grail RSD release for 2022. It's a stunning amalgam of library-music weirdness and the sort of outré space funk that would make Billy Preston go around in circles. Wales was a session keyboardist for James Brown, the Four Tops, and the Grateful Dead, among others. His dates with the latter led to a collab with Dead leader Jerry Garcia on 1971's excellent Hooteroll? LP, which reveals the guitarist's rarely glimpsed funk aptitude and which deserves its own reissue.
Joni Mitchell, Blue Highlights (Rhino/Warner; 9,000 copies)
This special release showcases highlights from the second volume of the Joni Mitchell Archives series, revolving around very rare recordings derived from sessions related to Mitchell's 1971 classic album, Blue, a treasure trove of complex melodies and perceptive, poetic insights. Joni herself provided guidance for this future collector's item. Lou Reed, I'm So Free: The 1971 RCA Demos (Legacy; 7,550 copies)
This collection offers a revealing look at the late legend between his time revolutionizing rock with the Velvet Underground and his erratic solo career, before “Walk on the Wild Side” (not included here) finally brought Reed the commercial success he'd longed for. You get stripped-down versions of songs you've memorized and cherished for decades, including “Perfect Day,” “Kill Your Sons,” “Ocean,” “Ride Into the Sun,” and “I'm So Free.” They're all done with just Lou on guitar and vox, hungry to get the next chapter of his life going and with still a lot to prove.