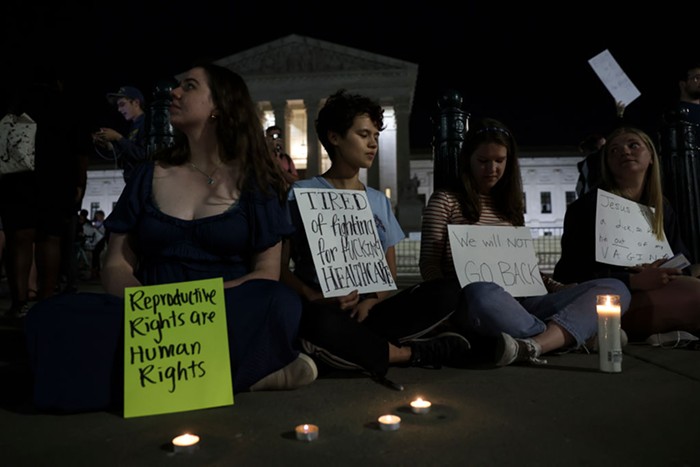 Protestors outside the Supreme Court building after the draft opinion overturning Roe v. Wade was leaked to the public Monday night. Kevin Dietsch / Getty Images
Good morning, Portland! You’ve most likely received your ballot in the mail by now. If you’re looking for a place to start evaluating candidates, may I suggest the county’s voter pamphlet and the Mercury’s endorsements?

• The Multnomah County jail spent a whopping $20 million on overtime pay in 2021, according to an Oregonian investigation. That’s compared to the $4.2 million the county health department and $1.5 million the Department of Community Justice spent on overtime. Sheriff Michael Reese said the extensive overtime hours were caused by an unusually large number of corrections officers who decided to retire last year, causing staff shortages.

• A small fire was started outside Congregation Beth Israel, a synagogue in Northwest Portland, and antisemitic vandalism was painted on the building Sunday night or early Monday. Both the Portland Police and FBI are investigating the attack, which occurred just days after a Holocaust remembrance day. “The message I’m giving to my community is that I don’t want anyone sitting in fear,” Rabbi Michael Cahana told OPB. "We don’t believe that this is part of a larger threat, there haven’t been other antisemitic incidents reported around town.”

BREAKING: The Timbers’ signing of a new striker is imminent, Gavin Wilkinson tells me. A depth piece, not under the U-22 initiative. #RCTID

• Despite a very rainy April, Oregon is facing a high risk fire season this summer. Central Oregon faces most of the risk in the state, but fire officials stressed that conditions can change very quickly and we won’t truly know the risks of fire season until it’s breathing down our necks.

• Governor Kate Brown toured central Oregon schools Monday to celebrate national Teacher Appreciation Week. The trip coincided with a continual rise in COVID cases throughout the state. Brown and director of the Oregon Education of Department Colt Gill stressed that the state’s high vaccination rate will help stave off an overwhelming surge of cases, and that local school districts will remain in charge of their COVID safety decisions for the foreseeable future.

Driver claims she was ‘following her GPS’ down staircase, police sayhttps://t.co/qtTItN7Mbl
— KOIN News (@KOINNews) May 2, 2022

• It appears that the Supreme Court has voted to strike down Roe v. Wade, the landmark case that legalized abortion in the US, according to a draft majority opinion leaked to and published by POLITCO last night. Chief Justice John Roberts confirmed the leaked opinion is real and was written by Justice Samuel Alito. “Roe was egregiously wrong from the start,” Alito writes, “It is time to heed the Constitution and return the issue of abortion to the people’s elected representatives.” Historically, Justices can and have changed their votes after a draft opinion has been written and major decisions are often subject to multiple drafts. No draft SCOTUS decision has ever been disclosed publicly while a case was still pending, and it’s unclear if or how this leak will impact the process. The Supreme Court is expected to release a final opinion in the next two months.

• Following the news, people got pissed and protested in front of the Supreme Court until the early morning hours:

Crowd outside Supreme Court has only grown in the last hour. I count more than 1,000 people right now. pic.twitter.com/b3gwZvFVF3
— Cami Mondeaux (@cami_mondeaux) May 3, 2022

• If the draft opinion is finalized, Oregon, Washington, California, and 11 other states have state laws that explicitly protect abortion, while 21 states have laws that would severely limit or ban abortion if Roe v. Wade is overturned. Here’s a handy map:

What abortion laws would look like if Roe v. Wade were overturned (as of December)

• Russian forces began storming the steel mill in Mariupol, Ukraine, where the last pocket of Ukrainian defenders were holding out Tuesday. The attack happened after a convoy of over 100 Ukrainian civilians had evacuated the steel mill’s bunker and fled to another Ukrainian-controlled city. An estimated 2,000 Ukrainian fighters were still present in the tunnels of the steel mill at the time of the attack.

• As the US continues to send arms to the Ukraine, analysts are starting to raise concerns about the US’s own stockpile of weapons. Weapons manufacturers like Raytheon Technologies have indicated that they won’t be able to ramp up production until next year due to supply shortages, meaning that the US is only able to supply the weapons it has in reserves. The Biden administration is currently evaluating “the health of the weapons systems’ production lines” and is considering a range of options to boost production—AKA funneling even more money into the US’s massive $773 billion 2023 Pentagon budget.

• Oh yeah, the Met Gala was last night. The celebs wore fancy clothes. Some people were on-theme and some people weren’t. There was probably some type of drama? Idk, I only saw random Met Gala pictures on Twitter scattered in between people mourning the loss of their abortion rights—it was a weird night. What I DO know is I love this video of Anderson .Paak doing this little dance:

• After Amazon workers created the first-ever unionized Amazon warehouse last month on Staten Island, the Amazon Labor Union fell short of unionizing a second warehouse in New York Monday. Warehouse workers voted against unionizing 618 to 380. Leading up to the vote, Amazon representatives held meetings with workers where they argued that they were better off dealing directly with Amazon than through a union. The company is also looking to overturn the results of the first Staten Island warehouse election.

• Let’s end today with an informative zine about abortion pills by local artist Sarah Mirk which is available for download and distribution for free, just in case you feel like reading some literature on the go!

I think a lot of people don't know about medical abortions—aka abortion pills—so I made this lil zine! (with alt text!) This is also available as a free PDF for download and distribute: https://t.co/l5cpXEAuKo pic.twitter.com/mf67ueDIiW
— Sarah Mirk (@sarahmirk) February 15, 2022