Photo by Archie Blue, courtesy of Niles Abston
Comedian, writer, and filmmaker Niles Abston has a lot on his mind. He recently made a short film, Notice To Quit, he just got hired to write for a hit FX show, and now he's returning to the Pacific Northwest to work on material for his second stand-up comedy special.

In anticipation of Abston's return to Portland—last fall was his first tour ever!—we spoke with the comedian about his newest Pacific Northwest trip, what kind of material we can expect, and what he liked about Everything Everywhere All at Once.

This interview has been edited for length and clarity.

MERCURY: It's been a while since we last spoke, I remember last time you came through the area you went from Portland to Seattle and now you're going from Seattle to Portland. Are you excited to come back?
ABSTON: Yeah, I'm so excited! I'm taping my next special in July, so I picked places to do a one-night-only thing to get a little warm-up—so that I can practice some stuff.

What are you hoping to tackle when it comes to material for the new special?
It's very much the thoughts from somebody that was locked up for a year [laughs]. I really needed to get them out, so this next special is just all the things I wanted to say on the internet but didn't, while I was locked in the house and watching everybody in Atlanta party.

How has it been—navigating the pandemic and still getting out there?
It's one of those things where you book a show, and you just hope that everything will be fine. I remember when the omicron variant hit, all the shows got canceled. Luckily Basement Fest—my festival I ran in New York—was a month after all of that, so things had kind of died down. But if I had done that festival a month earlier, it wouldn't have happened. 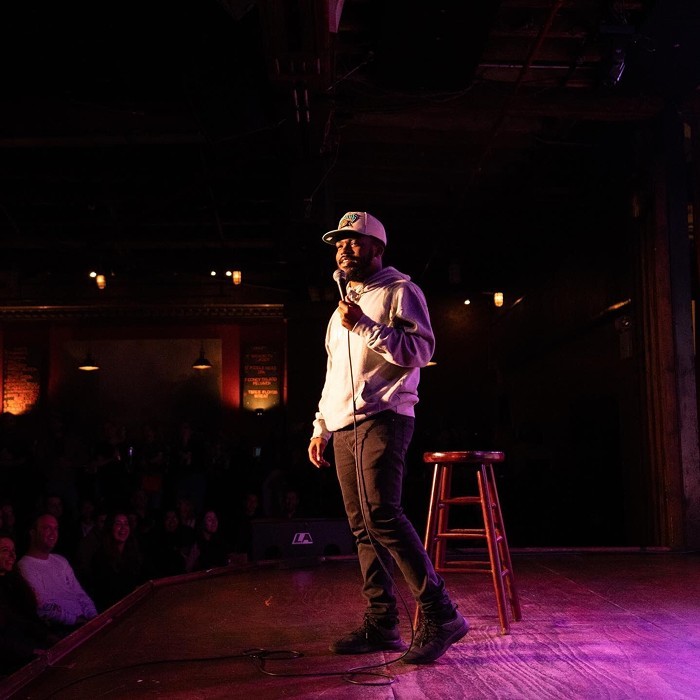 photo by sarowar, courtesy of niles abston
You recently completed a short film, Notice To Quit. What motivated that? Any inspirations you were drawing from?
I've never really written short films, but somebody reached out about a film grant. My roommate, Johnny Mac, is a comedian and a really good writer. I told him: "Hey, we're about to get some money, let's come up with a short film idea." At the time, we both hated our landlord, so we thought: How do we make a landlord a villain?' We were very inspired by movies like Pineapple Express, The Big Lebowski, Friday, and Next Day Air. All four of those are dark, stoner comedies—people die and all that kind of stuff. So we took that vibe and put it into our own story.

There aren't a lot of stoner comedies that come out anymore.
Nope. It's definitely something they try to shy away from, which I don't really understand. If it's done well, it'll do well. If anything, weed is even more popular. We don’t really have any Half Baked and How High type movies. I'm actually writing an article about it for Vulture, but comedy has gone away from silly. We don't get too much silly stuff anymore.

What's your favorite stoner comedy?
Friday. It's stupid, it's quotable, the characters are great, and it has a funny little lesson at the end.

Speaking of other movies, I remember the last time we talked you said how much you loved Shiva Baby.
It's so good!

Have you had a movie as good as Shiva Baby for this year?
Everything Everywhere All At Once is really dope. I really liked it a lot. I haven't seen too many movies, in 2022, because I've been really busy, but I got out to see that.

How do you find time to sleep with everything you've got going on?
I take naps during the day. That's the other thing, I sleep late. I get started at like noon to one. I'm not going to be able to do that anymore because I just got hired to write for my first TV show, but that was the plan originally—I just don't wake up till twelve.

Can you tell us which show?
I'm writing for Dave, the Lil Dicky show.

Congratulations! Well, I wish you the best of luck with that and the upcoming shows.
I appreciate that because if there is one thing I want people to get from this article it's just like please, come out to these shows because I'm really trying to put this new special together. Everybody is a part of the experience, so I appreciate you taking the time.