A visual rendering of one of two planned outdoor terraces. Renderings courtesy of Hennebery Eddy Architects
Come late summer, back-to-schoolers will want to note the closure of a favorite downtown study spot. Starting in August, Multnomah County Library (MCL)'s Central branch will close to the public for three months to allow for several concurrent construction projects.

A press release from MCL described the lengthy closure as an approach intended to "decrease longer disruptions of service." By closing the library to the public, crews will be able to complete multiple projects at once, more quickly, and with a lower overall cost, the release said.

Construction on Central begins this month. Most immediately, Portlanders can anticipate decreased parking around the library and less access to the building's eastern sidewalk. Then in August, the entire three-story building will close to begin the larger projects.

Partially possible due to funding from a 2020 Library Building Bond, the construction aims to improve Americans with Disabilities Act (ADA) access and create two new outdoor public terraces at the building's entrance. Additionally, crews will update the first floor restrooms, expanding the existing family restroom and adding a new one.

Numbers provided by MCL described the building's recent traffic at around 6,000 people per week. With the release, the library recommended nearby branches as alternatives: 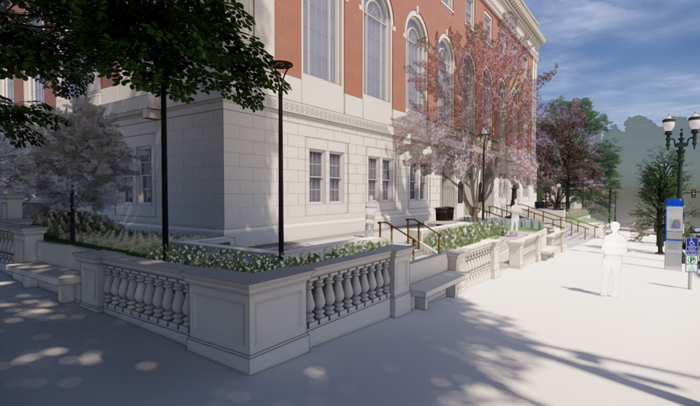 A visual rendering of the planned outdoor terraces. Renderings courtesy of Hennebery Eddy Architects
In addition to book loans, literacy programs, and community meeting rooms, Central Library is also a source of internet access, public restrooms, heat, and air conditioning for its visitors.

MCL spokesperson Shawn Cunningham told the Mercury there are plans to use a motor home-sized vehicle to "provide wifi, technology loans, books, 1:1 assistance, and other resources" to library users during the closure. There are no exact dates on when it will be available, but the vehicle is already being outfitted.

Additionally, Central's wi-fi will remain on throughout construction—its possible to use it outside the building. Cunningham said that the completed terraces will present a new amenity to visitors who want to use to library's wi-fi without entering.

While Central users—some of us with truly staggering holds piles—will hopefully be able to return starting in November, this project is one of many the Library Building Bond is helping to fund. "Central Library and other locations will experience periodic closures in the future to complete bond-funded work," MCL wrote. Updates on Central's construction and other details can be found on its central construction page.