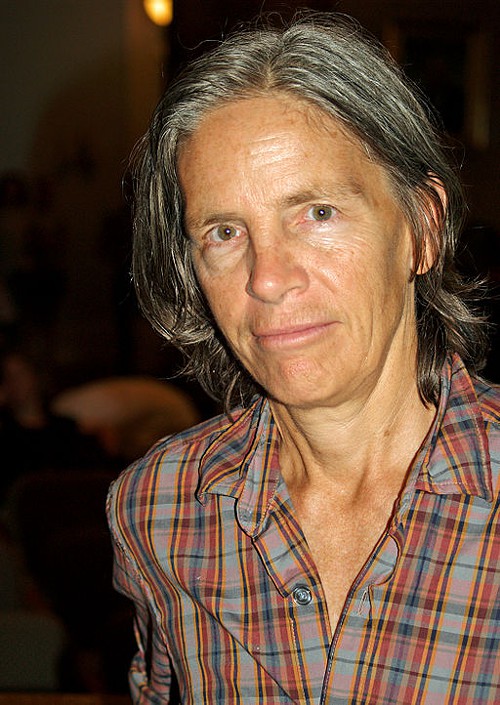 Poet, feminist, and longtime genre-challenging gadabout Eileen Myles just came out with the weirdest statement of support I've seen since the circus of the primaries began. It's an unruly scroll in favor of former Secretary of State Hillary Clinton. Though it appears on Buzzfeed (lolwhut), Myles' endorsement is very much in line with her writing. It's a slew of loosely connected, impetuously punctuated (or not) thoughts and impressions, and it has her signature GIANT FUCKING BLOCKS OF TEXT YET SOMEHOW COMPULSIVELY READABLE style. It's also funny. I love it. Here she is, describing her evolution as a voter:

The first time I voted I voted for Eugene McCarthy and I knew he wouldn’t win but it felt so great to vote for him, to vote for the right guy, the one who wanted peace. And I voted for Shirley Chisholm next because I loved her and I just thought how amazing it would be if she was the president of the United States. I have the button. I can’t even remember who they were running against. Right away I thought my vote was symbolic. I wanted it to support my system. THAT system didn’t work. And it still doesn’t but today I’m trying to get to the roots of why I think what I am thinking: that I want this woman to win. Lyndon Johnson I know for a fact was a great president. And I don’t mean by that he was a great man. He horrifically escalated the war in Vietnam. And he also got the civil rights bill passed and all the great society programs of the ’60s exist ‘cause of him because he was like a guy who loved to wheel and deal and he had a strong domestic agenda and there’s a romance about who Kennedy was, but Johnson did the thing and I think Hillary Clinton will be like that. I think she’s a leader. Could anyone be named Hillary and not be bossy. Yet she is being tarred for that. Well really for everything.

Can we talk about tarring. That might be the heart of what I want to say here. An old friend on Facebook says she’s outraged I’m voting for Hillary. She says do you realize she was a registered Republican, she’s a racist and a bigot and her and Bill personally supervised the growth of the prison industry, all the killing she did, and my friend goes faster and faster and soon we’re getting a form, a shape. Something evil called Hillary... Can we look at her republicanism: Hillary supported Goldwater briefly in high school. Nobody is actually a registered voter in high school. Yet even the New Republic reports that she has been a Republican. That same year she supported Eugene McCarthy. Later on she worked for McGovern. I did the same swerve. I wanted Kennedy buttons but so did all the other kids in junior high. The Democratic storefront was out but the Goldwater office gave me a giant black and orange poster that I put over my bed. They seemed to be going out of business. I just didn’t have a clue. Bernie Sanders has written about women’s desires to be gang raped not while he was in high school but when he was a grown man. Today he’s against funding Planned Parenthood. So where are all the vociferous sexism charges? We assume he grew away from his love of gang rape and that he has something even better in mind for funding birth control. Older men get lovable and older women get monstrous.

If your eyes didn't just roll back into your head from seeing all that blocky text, you can continue here.

Myles' support for Hillary Clinton is fascinating to me for a lot of reasons, I guess because she's an iconic poet writing in support of a viable woman candidate for the highest office in the land (while also expressing fear about the apocalypse), at a news source that until relatively recently was best known for personality quizzes about pop culture. What a time to be alive! Myles is also someone I think of fondly as a professional loose cannon (she ran for president as write-in candidate in 1992, not a joke), and while I'd have guessed she'd come out in favor of Bernie Sanders, it almost makes more sense to see her doing this. She's always flouting expectations with enviable swagger.

And I really hope she's wrong about the world ending. Because I want to see what her next move is.

Comments 13
Tags: Books Politics Girls Only! Blogs
If you enjoy articles like this, please help the Mercury continue our mission of providing up-to-the-minute information, progressive journalism, and fun things to do in Portland by making a small recurring monthly contribution. Never forget: Your help is essential and very much appreciated!
CONTRIBUTE NOW