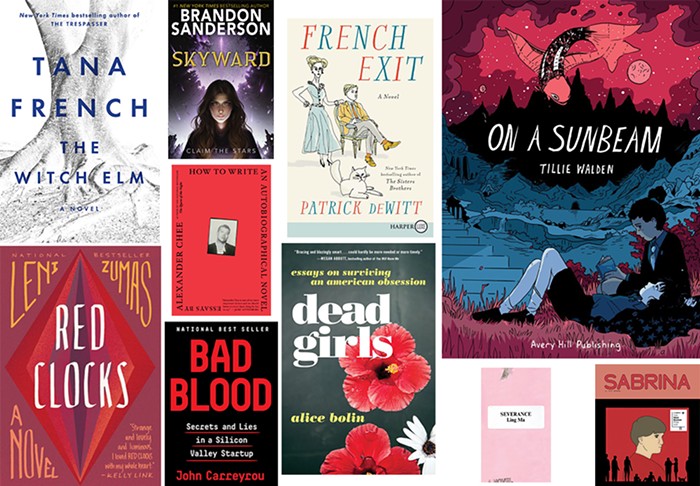 “Book Takes,” I said in the editorial meeting. “They’re like hot takes, but about books!” Then I waited to see if I would be allowed to bring my hot, dumb name to fruition. To paraphrase Drake: If you’re reading this, you’re already too late.

This year, our favorite books contained some unmistakable similarities. I see some patterns of escapism (especially into space) and murder (especially of women). I see the hunger to uncover deception and, by that same coin, understand our own unconscious prejudices. There were a shit-ton of political books this year—we’re hitting the halfway mark on a very bad presidency—but the books that stayed with us, though polemical in subject, were nakedly human in practice. It’s easy to see us all becoming tougher and wiser and doing what needs to be done to survive. But enough about what I see! Here are the Book Takes—our spicy blabs on the books that touched us this year. SUZETTE SMITH

At over 350 pages, John Carreyrou’s Bad Blood is a hefty venture of journalistic non-fiction, but to try to explain its astonishing Silicon Valley heist in anything less feels futile. Bad Blood builds on the original reporting Carreyrou did for the Wall Street Journal—on the fraudulent blood-testing startup Theranos and its inscrutable founder, Elizabeth Holmes—and goes deeper, revealing how empty technical jargon, Apple-esque design, cult-like management, and good old-fashioned hubris were enough to scam some of the Valley’s top investors and political animals like Henry Kissinger into falling for what could be the grift of the decade (if Donald Trump weren’t somehow still president). Bad Blood is being developed into a Jennifer Lawrence movie and I’ll watch the shit out of that when it comes out, but I’m not sure even J.Law’s dramatic range can convey a takedown of this level, which really needs to be read as a long-ass book so you can stop and appreciate the breadth of deception each time you turn the page. BLAIR STENVICK

In Dead Girls: Essays on Surviving an American Obsession, Alice Bolin’s primary focus is “to understand how I have been both the target and the accomplice of a culture that prefers dead women to living ones.” Interrogating beloved pop culture touchstones like Twin Peaks and true-crime reenactment shows, Bolin swan-dives into our collective fascination with the murdered woman, who she refers to as the Dead Girl—“the highest sacrifice, the virgin martyr.” Throughout her essays, Bolin runs a thread through topics like trauma, domestic violence, white female complicity, and Britney Spears with sharp analyses that sometimes amble off course, but for the most part thoughtfully deconstruct a trend that says a lot about the complex, systemic misogyny buried in each of our brains. CIARA DOLAN

In the Patrick deWitt’s, French Exit, self-absorbed New York socialite Frances Price and her likewise social and self-absorbed son have relocated to Paris to bleed their fortune dry. It feels as close to a Wes Anderson film as a book can, while remaining an original work in its own right. DeWitt is a master of dialogue and the words he puts his characters’ mouths are as distinct as Anderson’s color palette. Set in a time period that feels both vintage and contemporary (we’ll just call it “deWitt Time”) French Exit could be taking place in the 1940s or last week. DeWitt creates situations that mix magical realism with classic comedies of manner—because what’s more surreal and darkly funny than the human mind? WILLIAM KENNEDY

How to Write an Autobiographical Novel by Alexander Chee (Mariner Books)

Alexander Chee’s follow up to 2016’s lavish The Queen of the Night is How to Write an Autobiographical Novel, a collection of essays on subjects ranging from Chee’s early struggles with his identity (he is, per his Twitter bio, “half Korean, all queer”) to his first foray into the drag world to the death of his father when Chee was 16. While any writer looking for guidance will find much to learn here, the collection as a whole is far less didactic than the title might suggest: Chee shows by doing, offering his own development as a person and a writer as inspiration and example throughout this varied, generous, and open-hearted collection. ALISON HALLETT

On a Sunbeam by Tillie Walden (First Second)

This voluminous graphic novel was an honorable mention on the Mercury’s “Best Books of 2017” list because I argued for the inclusion of webcomics and for the superiority of Tillie Walden’s serialized online science-fiction epic On a Sunbeam over her 2017 graphic memoir Spinning. Both books are amazing (Spinning won an Eisner!), but since First Second published a print edition of the 20-chapter On a Sunbeam this fall, I get a chance to rave again. Set in a space-faring society where people—actually, I didn’t notice at first, but the civilization seems to be entirely women and nonbinary people—travel and live in giant Koi spacefishes, On a Sunbeam tells the story of of two girls who fall in love at boarding school. After they’re separated, one searches to the ends of known space for the other. I can’t deny that On a Sunbeam’s looming, colorful pages look better on a computer’s larger, scrolling screen. But since the internet is ephemeral and I want this story with me for all time, I’m buying print copies and squirreling them away beneath the earth for safekeeping. SUZETTE SMITH

So many politically aware novels end up feeling preachy or self-righteous. The people in the story are swallowed by the larger message; the complexity of human lives is narrowed and lost to idealism. Red Clocks isn’t that way. Leni Zumas’ latest is what could be called a close dystopia: It takes place a few years in the future, on the Oregon Coast, in an America where abortion and in vitro fertilization are illegal, single-parent adoption is soon-to-be illegal, and embryos have the rights of people. Based on proposed legislation, Red Clocks is stunning and horrifying in how it imagines the potential reality of the pro-life agenda. But the book works because it’s about people—five women who are complex, flawed, and real. It’s not a political book. It’s a book about how politics operate as an undercurrent in our lives. It’s a book about the marketing of motherhood and how cultural measures of success infiltrate our minds. Zumas is bold in how she allows the book’s biggest moments to be quiet, understated, and uncomfortable—just as significant moments often are in real life. The way Red Clocks sidesteps expectations won’t be for everyone, but, for me, that’s what set it apart. JOSHUA JAMES AMBERSON

Is it weird to say that the one book you must read about the internet and human relationships this year is a sparsely drawn graphic novel about male friendship? Sabrina is named for a woman who goes missing at the novel’s beginning, but she’s present in the story mostly as a missing person. The book revolves around a military officer, Calvin, who lets a high-school acquaintance, Teddy, stay with him following the disappearance of Teddy’s girlfriend. Despite Sabrina’s comfortable, muted colors and linework, I never stopped being shocked by Drnaso’s unfolding twists. Drnaso is attacking timely ideas—the spread of hateful ideologies via technology, the illusions that we know one another based on online interaction—better than anyone in contemporary literature or cinema. And he’s doing it in comics! SUZETTE SMITH

Ling Ma’s debut novel Severance begins with a small group of “brand strategists and property lawyers and human resource specialists and personal finance consultants” trying to survive an apocalyptic plague. They’re Googling survival skills and how to shoot guns. The situation and Ma’s writing lead to dark humor and easy relatability. I was lucky to hear Ma read from Severance at this year’s Portland Book Festival, where she explained she originally thought the story would be narrated from the perspective of the group before the central character of Candice Chen rose up into personhood. Severance is an interrogation of uncomfortable compromises people make in adulthood, modern coping mechanisms, the opiate qualities of capitalism, and the lure of nostalgia. There’s a pretty honest love story in there too, and, ultimately, the story of Candice Chen and how she survived the end of the world. SUZETTE SMITH

Blockbuster fantasy author Brandon Sanderson’s a machine, cranking out very good books—and often very big, very elaborate books—at a superhuman pace. But last month, he stepped back to offer something... smaller. Something more focused. And something great. Skyward, Sanderson’s first stab at science-fiction, is a YA novel about Spensa, a moderately bloodthirsty teen who dreams of flying a starfighter to destroy an alien horde and clear her father’s name. On the surface, it’s Top Gun meets boilerplate YA: A young woman, struggling to find herself; an oppressive government, ripe for overthrowing; a grumpy-but-good-hearted mentor; not one but several dreamy love interests. Sanderson carves sharp twists into those tropes, and his characters—including the blindly driven Spensa, weary soldiers belatedly realizing they’ve lost their war, and a talking spaceship that’s obsessed with mushrooms—never stop surprising and charming, while Sanderson’s talent for rousing action and clever plotting is on full display. (Skyward’s climax had me pumping my fist while reading quietly at a bar.) 2018 was a long, shitty year, and I lost track of the number of times I wished I could just pack up and leave this stupid planet. Flying alongside Spensa turned out to be the next best thing. ERIK HENRIKSEN

The books in Tana French’s wildly, justly beloved Dublin Murder Squad series are concerned with far more than just who left the candlestick in the billiard room. With a different Dublin murder detective assuming protagonist duties for each book, the true subjects of French’s series are the detectives themselves, and how their relationships, biases, and backstories play into their understanding of the corpses at hand. French’s first standalone novel, The Witch Elm, steps away from the Murder Squad to focus on a family affected by a crime rather than the detectives trying to solve it—but in true French fashion, the dead guy is hardly the point. When bones are discovered hidden in the backyard of a family home, it throws Dubliner Toby, his two cousins, and a beloved uncle into suspicion. The plot twists and turns, but the real hook is in French’s excavation of privilege: The Witch Elm is a brutally effective demonstration of how being white, male, and comfortable can cause a blinkered worldview and seriously impede one’s crime-solving abilities—among other things. ALISON HALLETT

Amid Climate Change, Political Horrors, and COVID-19, Maggie Nelson’s On Freedom Finds the Wisdom of No Escape