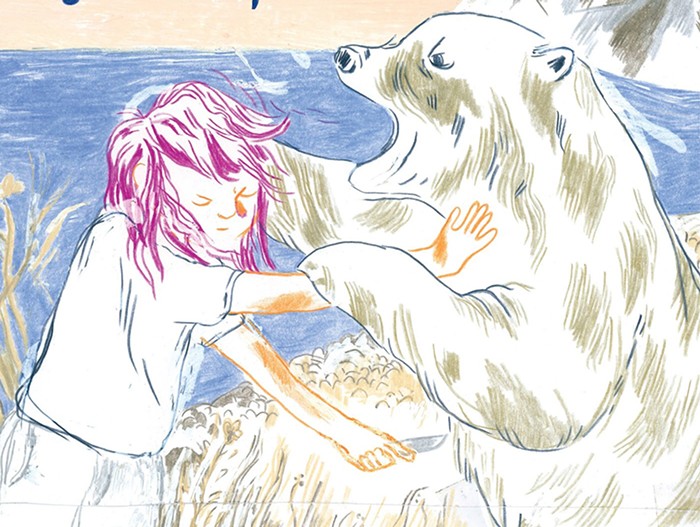 The new graphic novel by French-Canadian cartoonist Julie Delporte opens with colorful illustrations of Brussels, cabbages, and bodies that are nude except for their loose socks. Delporte’s color-penciled cursive reveals, “I tried to get pregnant one summer... but when he came inside me... I panicked.” The couple talks about having a child, texting about a potential name. Delporte writes, “I would have liked him to say ‘I’ll take care of her. You’ll be able to draw. I’ll change diapers. I’ll even nurse her.’ But neither of us said anything and when he came, I felt betrayed.”

This Woman’s Work is named both for the Kate Bush song about childbirth—which was written for the 1988 John Hughes film She’s Having a Baby—and the jokes Delporte’s father sometimes made about anything poorly done being “a woman’s handiwork.” The mention of her father’s misogynist comments feels like tongue-in-cheek defensiveness and a self-conscious self-burn on people meeting her artistic style for the first time.

Delporte’s drawings are colorful, imperfect pencil sketches. The page compositions range from sparse single-images to lush, perfectly crowded pages of cities, drawing supplies, and nature scenes. It would be easy to dismiss Delporte’s work as childlike, but she actually knows the true secret of visual art: what to leave out.

The book’s roughest portraits are the one-off life drawings of Delporte’s lover, of his legs and feet. These feel more private than the drawings of Delporte actually having sex because the perspective is hard to recreate in his absence. Another intimate, striking piece explores the similarities she finds between sketches of the aforementioned cabbage and her own vulva. There’s an unknowable spice to her work that could place it comfortably in a fine art gallery, but Delporte chose to make a graphic novel and, in doing so, unwind her thoughts on the conflicts of modern womanhood, love, and creative freedom.

This Woman’s Work began as a book about Tove Jansson, the Finnish cartoonist and creator of the world-beloved Moomin books. Though Delporte claims she doesn’t know why Jansson fascinates her, Jansson is a popular role model for many women creators. Successful, financially independent, living on her own island with her life partner (fellow artist Tuulikki Pietilä), Jansson is many an artist’s highest ideal when they hope for a happy life. But Jansson is so popular because success like hers is rare.

Delporte tries to think of Jansson as a role model. She frequently circles back on Jansson’s early lovers, some of whom were men, as if looking for a magic spell in Jansson’s biographies to turn herself bi or pansexual. There’s a heavy weight to loving men, an expectation of inevitable violence and constant adversity. Delporte looks at her family tree and wonders which of her ancestors experienced sexual violence. She doesn’t wonder if. She wonders which ones.

Throughout This Woman’s Work, I thought about how women still have so few role models to emulate and frequently the role models they do have are relics of history. Successful women of the modern age don’t have a lot of time to also mentor. Where can there be room for the passage of knowledge from senior artist to novice? This Woman’s Work is exciting because it speaks aloud Delporte’s taboo personal conflicts: She’s terrified that motherhood would destroy her artistic practice, she wonders if she might be able to outgrow heterosexuality, and she often wishes she weren’t a woman. Her boldness in putting these ideas down gives hope that, though she may wander without living role models right now, Delporte may have some useful advice to the comics generation that comes after.