At Tuesday's packed public meeting about the Rose Quarter Mayor Adams said the city had studied alternate sites for a baseball stadium during the past two decades of redevelopment planning for the district. But a couple architects and planners who feel Adams rushed the decision to site the Beaver's new stadium on the Memorial Coliseum site have drawn up sketches of where else the stadium could go. City Council votes on the stadium siting April 22nd.

Designer Rick Potestio actually showed up at Tuesday's meeting with sketches of what the 9,000 seat stadium could be like in the Lloyd Cinema Parking Lot. Before the meeting officially started, a small group of people gathered around Potestio, checking out the plan on his laptop. Potestio says the strength of placing the stadium in the Lloyd District is it could be connected to the Rose Quarter and downtown with transit links and be a popular anchor on the east side of the redevelopment area. 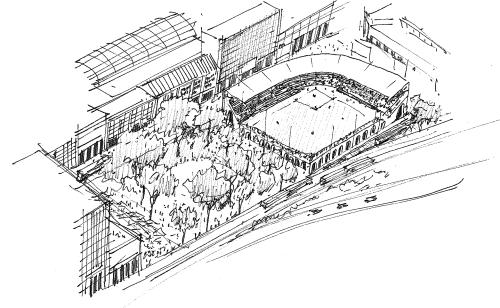 Then, Portland Architecture plugged the idea of a stadium at OMSI. A website just sprang up this week promoting that plan, which backers say would revitalize the underused lots around the SE industrial area and be right off the new bridge planned over the river. 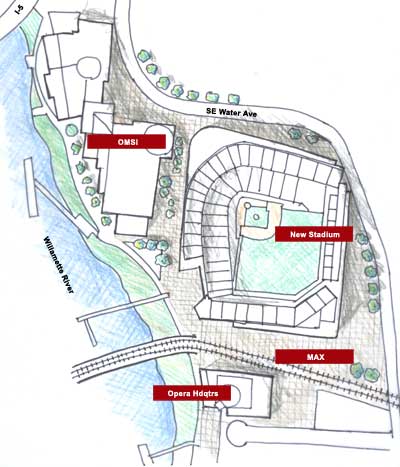 Expensive new stadiums aren't just a Portland issue — New York City opened $2 billion worth of new stadiums this week. More on their experience below the cut.

NPR ran a story last Sunday about New York's two new stadiums for the Mets and Yankees. Reporter Mike Pesca says, "The argument against new baseball stadiums goes something like this: a baseball stadium, NOW? The mayor threatened to lay off 14,00 teachers earlier this year. The city slashed $3 billion from its budget. And you're building baseball stadiums?'"

The story quotes sports economist Andrew Zimbalist who says that in New York's case, the stadiums are actually a good deal. "In the case of a privately financed stadium during the recession, you're generating economic activity and you're not depleting the treasury." New York shelled out $362 million in public money for the Yankees stadium and $138 million for the Mets stadium but the city's didn't dip into its own treasury to cover the cost. Instead, the "public money" part of the stadiums are being paid for by the purchasers of tax-exempt bonds.

Portland is currently planning to borrow $30 million for the stadium projects, paying the money back through the spectator fund. Paulson, Randy Leonard and Mayor Adams also pitched the idea of taking $20- million from urban renewal funds to pay for the new stadiums.

Comments 19
Tags: Build Out Blogs
If you enjoy articles like this, please help the Mercury continue our mission of providing up-to-the-minute information, progressive journalism, and fun things to do in Portland by making a small recurring monthly contribution. Never forget: Your help is essential and very much appreciated!
CONTRIBUTE NOW