Last year, City Commissioner Steve Novick spent nearly $45,000 on a pair of polls (see here and here) that attempted to divine how Portlanders felt about various options for funding streets.

Now, as he weighs whether to put a gas tax before voters, Novick's going the budget route. The transportation commissioner is asking neighborhood associations to send quick surveys to members to get a read on where they stand.

"Portland City Commissioner Steve Novick has requested that Neighborhood Associations to conduct a short survey of their members to find out what priorities they have regarding transportation funding and how to obtain these funds," Forest Park Neighborhood Association President Jerry Grossnickle wrote in an email to members earlier today. 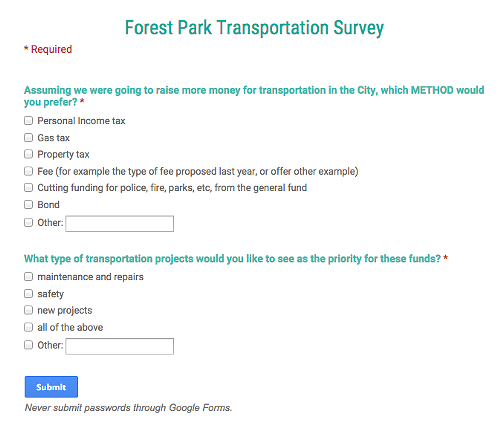 The effort is a further sign that the commissioner is serious about re-igniting the "street fee" discussion in earnest. It's estimated Portland's roads need more than $1 billion in work over the next decade if they're going to get up to snuff. The 10-cent gas tax Novick says he's considering would capture a small fraction of that. And it would almost certainly face fierce opposition at the polls from the petroleum lobby—still furious about Oregon's rejiggered clean fuel standards.

That means a gas tax will need to have a solid measure of public support before a campaign even kicks off, experts say. What little polling data we have suggests something like 58 percent of Portland residents could get behind a tax, but that number's by no means rock solid.

One apparent booster Novick seems to have scooped up? Mayor Charlie Hales, who appeared on OPB's Think Out Loud this afternoon, and signaled support for a gas tax.

"A lousy ten cents when gas prices have fallen by a dollar seems like the right thing to do," Hales said during the appearance.

It's more supportive than Hales has been in recent weeks. On September 15, his office sent the Mercury this statement regarding his stance:

Mayor Hales says it’s dangerous to think a 5- to 10-cent gas tax will cover all of the transportation need. Gas tax could be part of the solution, but it would have to be part of a larger package. “A gas tax is regressive, but so is passing the problem on to the next generation,” he says.

Hales primary competition in next year's mayoral race, Ted Wheeler, gave tentative support for a gas tax on September 9, hours after the City Club of Portland released a report supporting the concept.

Update, 3:35 pm: Novick reached out to the city's neighborhood coalitions about a month ago, he says, asking them to poll their member neighborhood associations. He's heard back from just one of the seven coalitions to date—the North East Coalition of Neighbors, which reported 102 respondents favored a gas tax, followed a miles-traveled charged based on vehicle weight.

While Hales told the Oregonian he expressed his support for a gas tax to the transportation commissioner before announcing it on Think Out Loud, Novick's only saying he "had an inkling that [Hales] was leaning in that direction."

"I just heard what he said," Novick said earlier this afternoon, regarding the mayor's on-air comments.

Update, 3:53 pm: Novick now confirms the mayor said he was supportive of the concept. The commissioner was unaware Hales was going to announce it publicly.

Also: It's sounding like Novick probably isn't casting aside expensive, scientific polls after all. Asked whether he's commissioned a new effort, the commissioner said: "Uhhhhhhhh.... If I did I wouldn't tell the press."

Tags: City Hall Transportation $$$ Blogs
If you enjoy articles like this, please help the Mercury continue our mission of providing up-to-the-minute information, progressive journalism, and fun things to do in Portland by making a small recurring monthly contribution. Never forget: Your help is essential and very much appreciated!
CONTRIBUTE NOW