Even Jesus Loves the Aces. Probably

CHRIST, I love the Aces. I say it that way because I saw their new show on Easter Eve and I have to believe Zombie Jesus would feel the same way. The Aces are sketch comedy duo Shelley McLendon and Michael Fetters, two of the smartest, funniest, strangest performers working in Portland today. They're funny without being cloying, intelligent without being cute, and high-concept without making you want to strangle an art-school kid.

In their new show, lessons in being a samurai take on tones of corporate human-resource trainings; a police stakeout becomes an exercise in iPhone filmmaking; and a lady centaur gives the toast at her sister's wedding before breaking down and breaking it down on the dance floor. A series of increasingly intricate runner sketches tie the whole thing together and provide anthropological commentary on the nature of being human. But, you know, with jokes.

Fetters and McLendon take the comedy of the commonplace and elevate it with surreal situations, exquisite detail, and a little interpretive dance by black light for good measure. They're incredibly talented writers, with a demonstrable love of language that has created some weird and perfect lines that they deliver with dead-on accuracy. We generally try not to re-tell jokes in comedy reviews, largely because they just don't translate well in print, but there's one line that I just can't get out of my head. In a sketch that reoccurs throughout the night, Fetters plays an interrogator going after a young woman with a secret. In trying to break her down, he offers her a drink. More specifically, he offers her "the refreshing sanctuary of a Fanta." The perfection of the line comes from the context, from Fetters' consummate control of his voice and body, and from McLendon's deadpan reaction.

And that's the Aces in a nutshell. Their sketches build an entire audience experience that isn't about a single joke, but an evening of comedy delivered with care and precision. McLendon and Fetters are masters of timing, physical comedy, and voice work. Their sketches are artistic but accessible, and are helping take Portland comedy to a new level. Go join them. 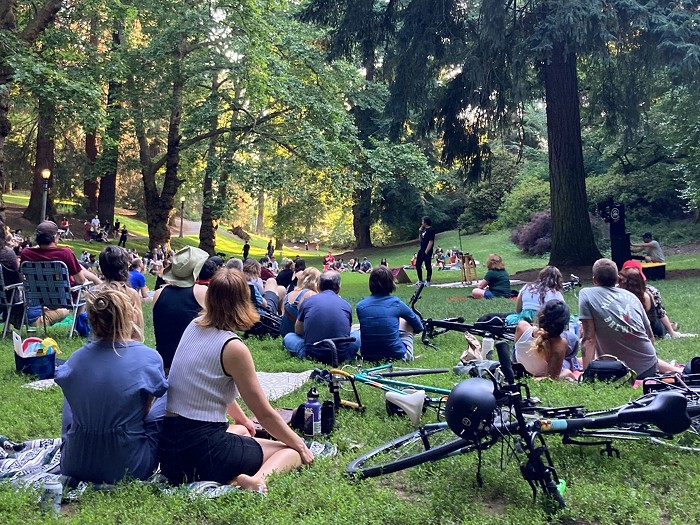