Here at the chaos of ComiCon, I relax into letting the crowd push me forward, like an amoeba adrift. But often the crowd stops, hits a knot—something's up ahead! Cameras are out! What is it? Why, it's a shirtless Thor! A barely legal Tinkerbell! A smokin' trio of Sailor Moons!

Comic conventions are like Halloween. They're a reasonably safe space for people to dress up as outrageously sexy personas, get a lot of positive attention to their bodies, then go home, untie the Gryffindor corset and be whoever they usually are in the morning. Mostly, in my experience, people with too-round, too-skinny, too-tall, too-short bodies receive a steamboat full of happy attention as long as they have a costume that fits (or can totally rock one that doesn't).

But there's plenty of shaming snickers at the people who don't have Spandex-ready bodies (there was a lot of laughter about a beer bellied-Magneto on my train in) and people who take the take the sexiness of dressing up to the point of actual sex (of all the nerds in the nerd totem pole, furries are always at the bottom).

And there's also bad mouthing of women who look too sexy. The sexy Slave Leias who are a little too enthusiastically sexy Slave Leias attract, in my experience, a lot of eye rolling and sniping.

So there's a conflict here: You're encouraged to go all out at ComiCon, but be too blatant about dressing up for the sexy attention it gets you, and some of the crowd will turn scornful.

I'm not the best person to consider this issue because (sorry) I've never dressed up for a 'con. So I struck up this discussion with three women who should have strong opinions on the matter: Cinderella, Snow White and Ariel (AKA Bethany Doddridge, Leida Breton, and Katie Vancamp). 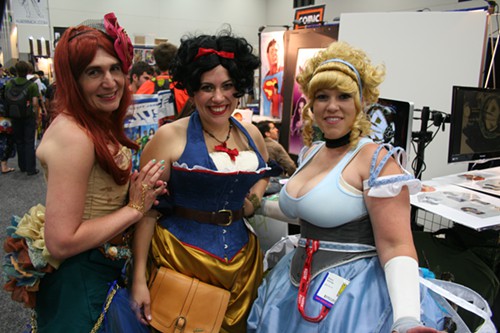 "I think that in some cases, dressing up definitely gets abused. You can go into the whole psychology of why we dress the way we do, but I think, in some cases, it sets people back," said Snow White.

Cinderella concurred, "There's some girls that are in just a miniskirt and a corset, who come just to be sexy and aren't even in a real costume. We come with an idea, a whole theme."

Where those three ladies drew the line is lack of creativity. People who dress up super sexy will win their praise if they show a spark of creativity there along with the cleavage. Cinderella and friends spent six months making their costumes, so when people stop in their tracks to tell the trio they look great, it's a complement to their craftiness as well as their bodies.

"There was a lot of sweat and blood in making these costumes, so it's great to be admired," said Snow White.

"I don't know," said Ariel, drawing back from her previous attack on the sexy-but-vague characters who populate the convention. "I love everybody."

Comments 23
Tags: Comic Books Sexual Politics Blogs
If you enjoy articles like this, please help the Mercury continue our mission of providing up-to-the-minute information, progressive journalism, and fun things to do in Portland by making a small recurring monthly contribution. Never forget: Your help is essential and very much appreciated!
CONTRIBUTE NOW