The City Can't Fire Its Own Cops 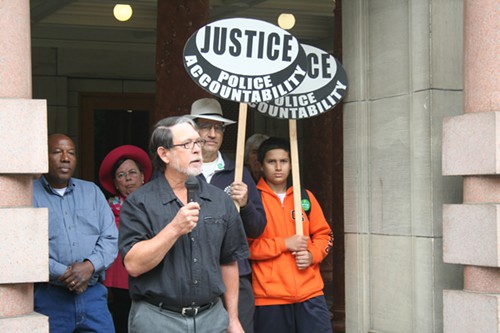 Who's in charge of deciding whether police officers can be fired? In Portland, not the police commissioner. Here it's the state employment bureaucrats—the Oregon Employment Relations Board issued a ruling last week that forces the city to rehire Officer Ron Frashour, who Mayor Sam Adams fired two years ago after he fatally shot Portlander Aaron Campbell in the back.

The perfunctory decision ironically comes just a week after a major federal investigation found that Portland police lack oversight and accountability when using force and have a pattern of using excessive force against people with mental illnesses (like Aaron Campbell). The Portland Police Association successfully argued that Frashour's shooting of Campbell was within police policy.

"I will never believe that police are trained to shoot someone in the back," said Campbell's mother, Marva Davis, in a statement read aloud at a police oversight rally this morning at city hall. "The community doesn't need people like you, you are a liability."

The rally raised the issue: If the mayor can't fire Officer Frashour, who can he fire? Police oversight activists worry that the strength of the police union will lead to less accountability for officers who the city tries to punish.

Portland National Lawyers Guild President Ashlee Albies says the police union is far too powerful in its influence over the outcome of use-of-force cases. "This is above and beyond protecting workers rights, this is the police making public policy to protect cops who kill people," says Albies. "When the community and the city are crying out for the ability to hold officers accountable and that can't happen because of a labor agreement—that's problematic."

"The city must take control of its police force," echoes Aaron Campbell family attorney Tom Steenson. "We have lost it."

Portland Copwatch's Dan Handelman is "ticked off" by this week's ruling, but congratulates Mayor Adams on his promise to take the issue to court. "Whatever the mayor does could set precedent, but it would be a long, protracted court battle," says Handelman.

For the meantime, police oversight advocates are pressing the police force to not return Officer Frashour to patrol but, if they do rehire him, put him in a desk job. For his part, police union President Daryl Turner says Mayor Sam Adams is continuing to pursue the firing of Officer Frashour because he has a "personal vendetta."

Comments 6
Tags: Cops Blogs
If you enjoy articles like this, please help the Mercury continue our mission of providing up-to-the-minute information, progressive journalism, and fun things to do in Portland by making a small recurring monthly contribution. Never forget: Your help is essential and very much appreciated!
CONTRIBUTE NOW