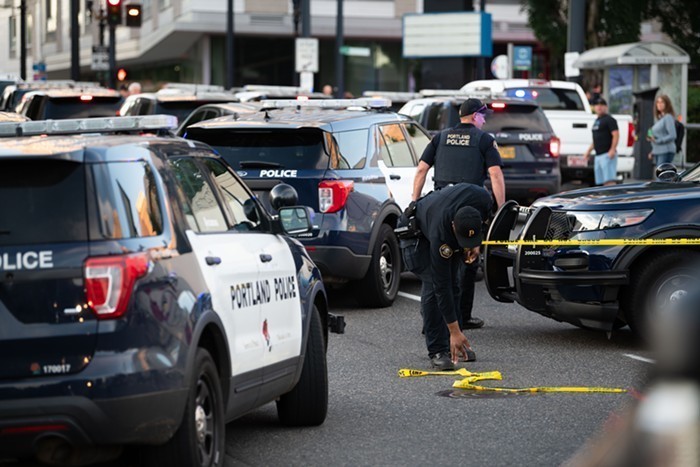 The Portland Police Bureau (PPB) has identified the person killed by a PPB officer Sunday as 19-year-old Johnathan Worth.

Cavalli-Singer and an unnamed fellow officer arrived at SE 148th Ave. and SE Clinton St. shortly after midnight Sunday morning, responding to a report that a man and a woman were physically fighting in the street.

A video of the encounter (warning: video is graphic and disturbing)—captured by an individual who films cop encounters dubbed "Ruthless Copwatcher" on YouTube—shows two officers grabbing a man and pushing him against a ledge. The man appears to pull away from the officers, but the officers wrestle him to the sidewalk. According to PPB, the officers were attempting to arrest the man at this point. The man then appears to pull out a gun and shoot it once into the air, to the left of the officer on top of him. Officers pin him to the ground, then one officer fires a gun six times directly at his body.

Throughout this encounter, the woman who was previously fighting with the man is heard yelling, telling officers to stop as they take him to the ground. When the officer begins to shoot the man, she screams, scrambling backwards on the sidewalk, her shoes falling off in the process. She runs to the man's body after police back away.

The man is the second person to die at the hands of Portland police this year.

Cavalli-Singer has worked for PPB for 5 years—long enough to be on the ground during another officer shooting. In April 2021, Cavalli-Singer was one of the first backup officers on the scene after PPB Officer Zachary DeLong shot and killed a man named Robert Delgado in Lents Park. Cavalli-Singer administered medical assistance to Delgado after arriving at the park and applied a chest seal to his bullet wound.