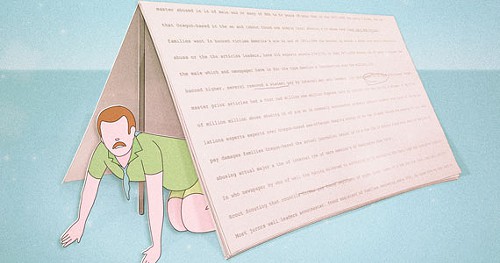 Two years ago, a grown-up Oregon Boy Scout sued the Boy Scouts of America for failing to deal with a troop leader's years of sexually abusing kids. He won his case, but the lawsuit revealed a massive stockpile of evidence the scouts had compiled on their volunteers: Over decades, the scouting administrator assembled thousands of pages of "perversion files" on people deemed unfit to serve as volunteers, but fought to keep the files private.

Well, the Oregon Supreme Court ruled a few months ago that the files must be made public. The LA Times finished up an exhaustive analysis of the documents and their conclusion is, sadly, not a surprise. The files detail how the scouts had a system, like the Catholic Church, of working within the organization to exclude or transfer accused child molesters, but would not report crimes to the police. In at least 50 cases, the Boy Scouts expelled suspected abusers from the organization, but later discovered that the suspects had rejoined the scouts as volunteers and were accused of molesting again.

The Oregon scout that kicked this all off, Kerry Lewis, fought an emotionally difficult court case and was awarded $20 million for the crimes against him. For hundreds of other people whose stories are told in the files, there will likely be no justice.

Tags: Crime Blogs
If you enjoy articles like this, please help the Mercury continue our mission of providing up-to-the-minute information, progressive journalism, and fun things to do in Portland by making a small recurring monthly contribution. Never forget: Your help is essential and very much appreciated!
CONTRIBUTE NOW