I found Diana Jared under the Hawthorne Bridge at PDX Pop Now, where she was wedding a man to a head of garlic. He was attempting to slide a ring over the garlic bulb’s dried stalk. Jared cautioned him to be gentle. “There’s no rush in love,” she said in a Southern drawl.

On a folding table next to a large portrait of herself, pointing to the heavens, Jared had arranged an assortment of items: chalky pastel dinner mints, Jordan Almonds, a large bottle of extra dry Cooks champagne, an informational binder, and a sign that read: “Diana Jared, Licensed Ordained Minister, I will marry anyone to anything.” 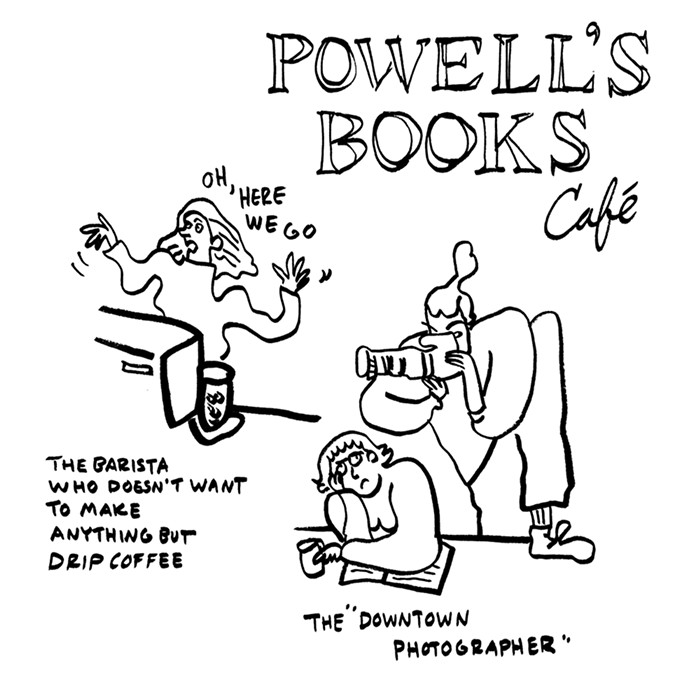 The devil is in the details with Diana Jared—@dj.weddings on Instagram, local Portland illustrator Jenny Vu, AKA the popular cartoonist @oniongrl.

I’ve been a fan of Vu for some time. Her oniongrl drawings are hilarious and insightful, she claims clients like Adidas, Redbull, and She Shreds magazine, and her zine Turkey Club never fails to turn me on to new illustrators and writers in town. But Vu’s recent creation of a wedding facilitator persona has been exactly what I needed to get me through this fraught season: wedding season.

While it is difficult to pin down the actual dates of wedding season, no one can deny that we are currently IN IT and it is fucking with all our heads on some level, regardless of if we’re married (is our love still good?), non-married (should we be married?), or single (am I even a person?).

“The first time Diana Jared officially existed was at Be Honest,” Vu, told me, having shed her pantsuit for sturdy-looking acid-washed jeans. “But I’ve had different blonde wigs over the years. I’ve always liked that character, that Southern plastic jewelry persona.” Vu switched into her Diana Jared accent seamlessly, affecting a Carolina-style drawl, which she picked up from her youth in Florida. “Let me know if you have any questions. Here’s some refreshments. Check out what I got goin’ on.”

A PSU graphic design program event, Be Honest is meant to be a portfolio showcase. Generally students brand themselves and their aesthetic to try to make an impression on local design and advertising agencies. Vu decided to make up a person to sell instead. “It was for fun, and I just went way too hard on it,” Vu says. “I tried to design a brand, an experience, a business, and a person. It was originally just gonna be the binder with all the stuff I made in it, but then people kept asking, ‘Where’s Diana?’ And I was like, ‘Well I’m gonna go home and change.’” Vu says the last part laughing. “I was hesitant to be in character for the entire period of time because I know that adding a first person experience is too much for a lot of people. I didn’t want to push people away from enjoying the binder. I’m like, ‘Please, look at the binder!’”

Vu’s Diana Jared binder is a piece of art in its own right: Vu has a pitch perfect grasp on the humor and earnestness of the businesswoman idea she’s playing with. An iconic image of Jared features her straightforward dazed smile with cake crumbs stuck to her lips and her blonde wig sitting unnaturally high on her head. “What I love most about my job is being there for all the Marriages,” another page reads. It’s subtle and scalding.

Vu attended Ringling College of Art and Design in Sarasota, Florida, which she assured me it is neither made up nor circus themed. (“That is a question I have been asked many times,” she said with fake ire. “Many times! And I’m angry that you did it again!”) Recently she took post-bac classes in the PSU graphic design program, where the designer mindset helped her separate her different styles into aesthetically distinctive projects. Vu sees her @oniongrl drawings as no more an expression of her personality than Diana Jared, and she doesn’t want to get locked into one style.

A big aspect of what makes Vu’s pared-down @oniongrl cartoons so impactful is the writing behind them. The pastel-shaded business graphs of the Diana Jared binder work in a similar way, providing an uncomplicated visual element to pair with Vu’s earnest one-liners. (A pink and yellow pie chart reads: “Fifty percent of people who are married say they would try marriage again.”) “At least half of my work is writing,” Vu said. “I’ve been considering abandoning the visual element. Right now I’m writing a short story. It’s a collection of fake diary entries written from the perspective of a dog.”

Vu’s not abandoning any of her projects immediately. She repeatedly expressed how tired she is, but it’s also evident that Jenny Vu is like an art shark: She can’t stop swimming. It isn’t built into her cartilage. So for now I’m checking @oniongirl for drawings of “datey Jesus,” I’m getting married to things at the Diana Jared performance pop-ups, and I can’t wait for this dog diary.