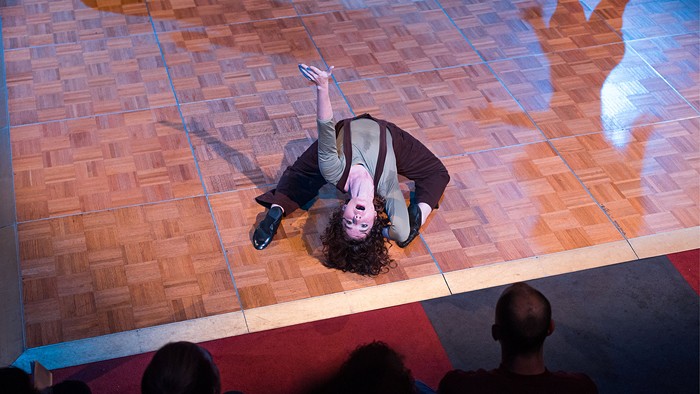 It’s that time again. Time to receive PICA’s perfectly designed TBA programs like one might accept a holy object. Time to crease the corners with interest and jam your fingers onto your phone, trying to figure out who half these artists are. Whenever I get a load of what TBA has planned, I feel completely out of my depth and then, after a little research, I’m so excited I can barely sleep.

For the first few years that I lived in Portland, I didn’t know that we had a Time-Based Arts Festival, and when I did learn about it I wasn’t clear on what it was. What were the parameters? Dance, installation, spoken-word, theater, music—it’s a pretty loose net. The great connection between them seems to be that the art works and performances the Portland Institute for Contemporary Art curates are all a little experimental, and try to engage with their audience on an emotional level. The festival is fun—and often funny—but it never fronts. I have been overwhelmed at TBA, but I have never been bored.

Here are a few picks that I’m hotly anticipating for this year. Due to the nature of the festival, it’s hard to anticipate what to expect, so keep an eye on our TBA blog for daily coverage of the Mercury TBA Crew’s impressions and critical recollections.

This is one people have been talking about. A number of recordings of past performances are already online. Four women in velour outfits (I feel the velour is important) can be seen swiveling their hips and standing on one another’s shoulders like cartoon cats. Stuck in some hypnotic version of playground foursquare, the dancers mirror each other’s movements and break form with an indeterminable rhythm. Is this sexy? Is this work? Are the dancers here to be objectified or are you being a creep? Choreographer Milka Djordjevich has presented Anthem all over the world and now PICA brings the dance to Portland so attendees can unravel the mystery for themselves. The Works, 15 NE Hancock, Fri Sept 7-Mon Sept 10, 6:30 pm, $16-20

Is it a rave? Is it a performance? TBA has been asking questions like this for years. That’s why it’s wonderful to see the similarly questioning Portland gallery and showspace S1 joining the festival line-up this year. TBA’s late-night sets are often straightforward music shows, but for this Friday night slot S1 curated San Francisco-based DJ and multidisciplinary artist the Creatrix (Fanciulla Gentile) to employ both original constructions of sound and “more danceable aspects of electronic composition.” Also on the bill is Boston/Providence experimental musician Isabella, who uses found equipment to improvise her “live hardware techno.” Is it a rave or a performance? It’s probably both. The Works, 15 NE Hancock, Fri Sept 7, 10 pm, $5-15, all ages

Gregg Bordowitz - Some Styles of Masculinity

TBA’s monologues can come off as plain, compared to the festival’s other shows—many of which involve costumes and flashing lights—but their spoken-word programming has a history of being the festival’s most rewarding and well-curated offerings. Video artist, writer, and activist Gregg Bordowitz is probably best known for his 1993 documentary Fast Trip, Long Drop about his struggles with AIDS activism and his own illness (this year’s festival includes a retrospective of Bordowitz’s work called I Wanna Be Well), but he’s also a charming and captivating monologist. Part history lecture, part spoken-word piece, Bordowitz will give three improvised, interconnected talks about specific masculine stereotypes that were formative to his own coming of age. I can’t be the only one who’s excited to collect all the masculinities. Reed College Chapel, Eliot Hall, 3203 SE Woodstock, Some Styles of Masculinity: Rock Star, Fri Sept 7, 6:30 pm; Some Styles of Masculinity: Rabbi, Sat Sept 8, 4:30 pm; Some Styles of Masculinity: Comedian, Sun Sept 9, 4:30 pm, free (reservations required)

For the second year, TBA includes this favorite local project, which assigns musicians a classic film to rescore. Cinephiles and fans of ambient and experimental music can relax and enjoy the intermingling of the old, subtitled film and the new compositions or adaptations of the classic score. Curated by Holocene’s Gina Altamura, the chosen films often already had a pretty kickin’ score, so there’s some gray area between covers and complete do-overs. You could look at Fin de Cinema as a sort of port in the storm of TBA’s artistic intensity. Well-known improvisors Like a Villain, John Niekrasz, Jonathan Sielaff (the bass clarinet in Golden Retriever), Patricia Wolf (of Soft Metals), Amenta Abioto, and Noah Bernstein perform. The Works, 15 NE Hancock, Mon Sept 10, 10 pm, $5-15

We'll be blogging about TBA 2018 every day of the fest! Keep up with us at: portlandmercury.com/tba
If you enjoy articles like this, please help the Mercury continue our mission of providing up-to-the-minute information, progressive journalism, and fun things to do in Portland by making a small recurring monthly contribution. Never forget: Your help is essential and very much appreciated!
CONTRIBUTE NOW

Some Styles of Masculinity

Some Styles of Masculinity