The Portland Art Museum's Perspectives celebrates photographers of color who captured the 2020 George Floyd protests, but images of police violence are strangely absent. 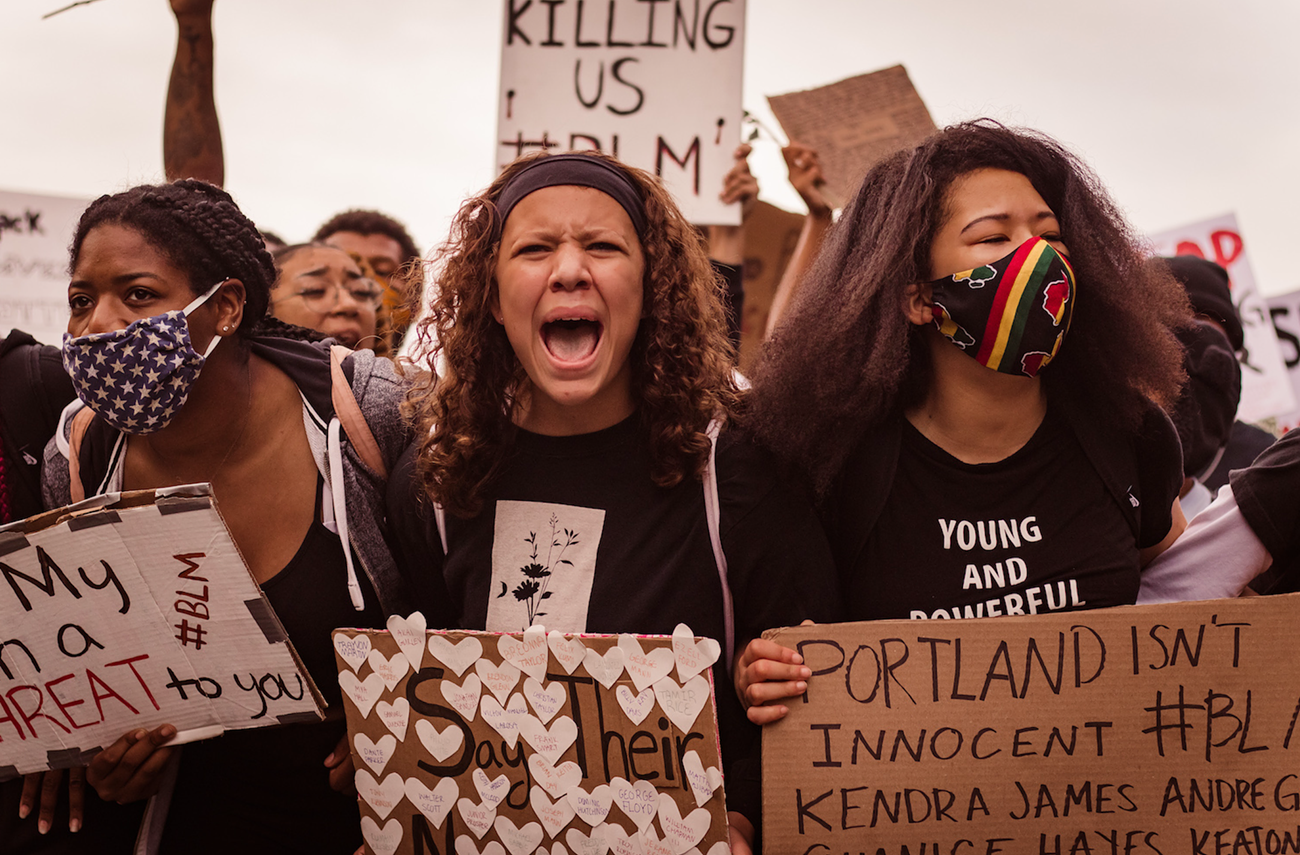 As a journalist who spent months attending and documenting Portland's unprecedented civil rights protests of 2020, I was warned that the Portland Art Museum (PAM)'s current photography exhibit, Perspectives, would bring a rush of emotions.

On display through November 13, the curated exhibit offers a glimpse through the lenses of six fantastic photographers of color: Mariah Harris, Linneas Boland-Godbey, Daveed Jacobo, Emery Barnes, Joseph Blake, and Byron Merritt. Each of them spent weeks—if not months—in danger's way to export honest imagery of chaotic, unpredictable, dangerous conflicts between city residents and multiple levels of government.

Linneas Boland-Godbey—one of the show's six photographers and a face well known in Portland for coordinating art therapy events—said that seeing the photos brought on “little PTSD flashbacks.”

“It brings it back,” Boland-Godbey continued, laughing while wiping away tears. We were speaking in the middle section of the gallery, which PAM reserved for people to step away and relax. “I’m just like, when are we going to walk again?”

My initial reaction was not particularly emotional; rather, I found the exhibit surprisingly calming. Boland-Godbey’s colorful portraits, in particular, capture masked protesters in relatively solemn moments, posing seriously in seemingly safe environments. The stoicness of the subjects—no smile wrinkles, no teary eyes, no obvious anger—brought forth a reaction, though. The portraits carry the feeling of necessary struggle, the feeling of doing what has to be done, even if it’s not what you want to be doing.

By contrast, Daveed Jacobo, an LA native who’s lived in Portland since 2011 and helped bring artists like Boland-Godbey together for this exhibit, captured more aggressive images of the conflict. His black and white pictures feel ripped from a newsreel, complete with teens kneeling on the front lines with their hands up, facing riot cops de’jour. Jacobo has photographed Portland protests—such as Occupy—for years, but found himself more involved in the racially-charged protests centered on Black lives and solutions, rather than a “general overall sentiment that nothing was working.”

“This was about race,” Jacobo said. The child of immigrants from Mexico and Guatemala, he is the show's only non-Black contributor. “This was also about mutual aid. About making alternatives. A lot of conversations came out, and I was part of the conversations about, what does it mean to actually take care of each other as a community?… Do we need the police?”

Emery Barnes' black and white contributions to Perspectives are filled with iconic images of solidarity, resistance, and joy: a man dancing on top of a truck, backlit crowds raising fists, massive marches spilling into roadways and swallowing cars.

Now living in New York City, thriving at his work in brand marketing, Barnes noted the toll that the protests took on him.

“I definitely needed to take a step back,” he said. “I was going straight for about a month, and I was pretty drained—physically, mentally, and emotionally. I think at the time I was ready to get back to the work space.”

Something similar happened to Mariah Harris—an energetic friend of mine whose art hung in my office for over a year before it hit this museum exhibit. Harris was already established locally as a boudoir and family photographer, but when she began photographing the protests, her work caught the eye of Polly Irungu's Black Women Photographers—elevating her to overnight sensation status. Harris' high-saturation, sepia-toned editing and her knack for capturing faces filled with emotion in complex group shots stand out like a visual signature to her work.

The outspoken photographer similarly drew the gaze of her fellow protesters and was often singled out for speaking about micro-and macro-aggressions. Harris says it was all worth it—already seeing the museum exhibit raise her work to another platform.

“When I made my book last year, my photobook, I already felt like that was something,” she said. “I didn’t want my photos to die in an Instagram graveyard.”

Initially wary about his safety, Joseph Blake, who refers to himself as “just a kid from Portland," started his protest coverage on a rooftop with his drone, but was shocked by what he saw.

“I was amazed by how many people were down there, but also the powerful sense of community that was already there,” he shared. “For the first time walking downtown, I felt like I didn’t have to worry about anything, it was all unity. So from that moment I was like, this is something I want to be a part of.”

Blake's photographs, taken from his drone and camera, are displayed in both color and mono, but he also created multimedia works for the show: video loops of massive, peaceful protest scenes and artifacts he collected—including posters, snacks, goggles, and a gas mask he was given by activists—displayed in protective glass cases.

Throughout Perspectives I saw images of scenes that I recall vividly, but it wasn’t until I perused the work of Bryon Merritt that I was flooded with emotion.

Formerly a design and branding executive at Nike and Delta, Merritt is currently the Vice President of Design at Amazon Music in Los Angeles. His photos don't show marches—rather he documented the progression of the Pioneer Place Apple Store, as it became a mural and a tourist destination. It began, for him, as “a study of architecture.”

“As the protests started heating up, the businesses started to try and protect themselves," he explained cheerily. “The barricade around the Apple Store was really significant.”

In the early morning of Saturday, May 30, 2020, people in the crowds of downtown protesters smashed the windows of the Apple Store. The company quickly erected black plywood walls, creating what Merritt saw as “a giant chalkboard.” He went on to document murals artists painted there, the artists who painted them, and eventually the audiences of people moved by the art.

What stood out to me immediately in Byron’s portion of the exhibit, was a portrait of Portland Police Chief Chuck Lovell and another officer posing in front of a mural of George Floyd.

Perspectives captures civilians risking it all to change the world and that made sense to me—up until I was confronted by the image of the very police Portlanders protested—to defund, disarm, and abolish—standing and smiling in front of an image of the man whose death inspired hundreds of thousands to action. It was more than I could handle, and for a moment, I retreated to the center of the room.

As much as I enjoyed Perspectives, its inclusion of friendly police images shook me out of my reminiscent mindset, and forced me to critically examine the exhibit contextually. While it displays mostly images of hope, collaboration, and emotional explosion, it completely lacks those of the police brutality that underscored the conflict and galvanized Portland's protests.

I saw no images of the federal troops who violently descended upon our city, nor of the caravans of Oathkeepers, Proud Boys, and the like who were (and still are) allowed to travel here and wreak havoc.

In this way, the exhibit lacks proper framing. And I'm not just talking about the decision to tack the prints to the gallery walls rather than frame them.

As Merritt referred to art as "the great equalizer," it sunk in to me that while Portlanders got none of what we passionately and aggressively demanded—PPB has a record high budget, Wheeler is still the mayor, the oversight committee we voted for still doesn't exist, and police are still killing people at the exact same rate. The exhibit, which fills a room previously occupied with art representing Frida Kahlo and Diego Rivera, places the energy of the protests firmly in the past. This is the natural function of a museum, to recognize the past, and I have not been able to shake the feeling that, to many, the resistance is over.

In the end, Boland-Godbey was right. The exhibit did bring it all back, and I too felt the urge to get back to the streets. It's likely Perspectives will hit viewers in varying ways, but in the words of Jacobo, “Give it a minute to sink it… I hope it becomes anti-racist.”

Mac Smiff is a freelance music writer and curator specializing in Northwest Hip-Hop culture. In his spare time he enjoys getting hurt on the basketball court and being raised by children.
If you enjoy articles like this, please help the Mercury continue our mission of providing up-to-the-minute information, progressive journalism, and fun things to do in Portland by making a small recurring monthly contribution. Never forget: Your help is essential and very much appreciated!
CONTRIBUTE NOW