Courtesy of Your Friends at #PDXBALL 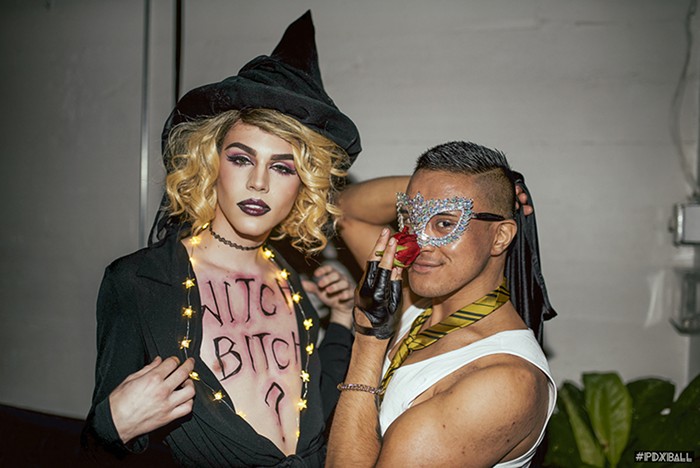 Check out Portland Is Burning

BUTCH QUEEN A butch queen is a gay man. Performance categories with this description are for cis gay men.

The Portland Committee on Community-Engaged Policing (PCCEP) September Full Board Meeting
Join the PCCEP Tue 9/28 for the committee board meeting from 5-8p to discuss Strategic Plan, Codification, Citizen Review Committee and more!

BUTCH QUEEN UP IN DRAG or DRAGS Men in drag serving a female illusion. Categories with this description are for men dressed in drag as women.

BUTCHES Trans men. Categories with this description are for trans men.

CHOP Being cut from a category. Getting chopped means you will not advance to the next round of that category.

FEMME QUEEN Trans woman. Categories with this description are for trans womxn only.

HOUSE An organization within the ballroom community that serves as a system of support, provides resources, and enters and throws balls. A traditional house is headed by a mother and father of the house.

HOUSE MOTHER and FATHER Two leaders of a house who are known and respected in the ball scene. A mother or father of a house takes on a leadership role in providing support, knowledge, and camaraderie to the house’s “children.”

KIKI A kiki is a low-key function, sometimes including dancing and friendly competition. Always fun, never serious. The kiki ballroom scene is focused heavily on community, and events are often run by up-and-coming members of the scene. Participants refer to the growing ballroom scene in the Northwest as a kiki scene because the scene is so new.

OTA Open to all. Anyone of any gender presentation can enter this category. Can also refer to styles of vogue, meaning a voguer can dance old way, new way, or femme.

PASSING The ability to be perceived as either a cisgender man or cisgender woman. This term is usually reserved for trans people.

REALNESS The ability to blend into a group that is not necessarily one’s own. For example, if a category calls for “executive realness,” contestants will be expected to serve their best rich CEO look.

SERVE (TO SERVE A LOOK/ELEMENT) To bring it to the floor at 110 percent. For example, to “serve face” means you are showing every element of your face. To serve a look means you are not only wearing the outfit but you are giving a strut and bringing attitude.

10s Getting your 10s from the judges means participants will progress to the next round of the competition.

VOGUE Vogue is a style of dance originated in Harlem in the 1970s. Vogue began in Riker’s Island prison at a time when straight inmates were separated from their queer counterparts. These mostly Black and Latinx inmates created a game where they would imitate the poses and photos in Vogue magazine, seeing who could best serve the look. Paris Dupree brought this game from Riker’s Island to the clubs, where it became a form of dance celebrated internationally.

VOGUE FEMME Vogue femme is a style of vogue that emphasizes feminine movements. There are five elements to this style: cat walk, duck walk, hand performance, spins and dips, and floor performance.

WAACKING/WHACKING A club style dance from the ’70s, traditionally danced to underground disco music. Some of the main elements of the style are “punking” (dramatic storytelling), arm and hand performance, and precise musicality.

WALK (A CATEGORY) To enter a category in a ball.

The Story Behind the Gayest Week in TV History

“Nikki, thank you”: Sentencing and Vigil Bring Closure for Loved Ones of Murdered Trans Teen