A Town Deserving of Dumplings

Can XLB Provide Dumplings Worthy of Other West Coast Cities?

It’s almost impossible to think about soup dumplings without visions of Din Tai Fung, the legendary Taiwanese chain that’s made xiao long bao a cult food on the West Coast.

For those of you who’ve been to the nearest Seattle-area outposts, you know what I’m talking about. If you haven’t, the restaurants—located in Bellevue and University Village with a newly opened downtown spot—are where the truly obsessed swarm to get their fix of this notoriously tricky dumpling. Waits are pretty much always 90 minutes or more, and the hungry watch through windows into the prep kitchen, where staff in all white pinch together the signature twisty tops with a speed borne of endless repetition.

In Portland, let’s just say our level of dumpling evolution, particularly when it comes to xiao long bao (XLB for short) is nascent; until last year, the only notable version was being served at Szechuan Chef on SW Macadam.

The latest step forward is XLB, the bustling, self-described “Chinese Comfort Food” restaurant in the former Lardo space on North Williams. Owned by Aviary founding chef Jasper Shen, XLB received massive pre-opening press, and the line for counter service has often been out the door since day one in January.

Shen told Willamette Week he taught himself to make XLB from YouTube and practiced endlessly to perfect the finicky soup dumpling. A good XLB is indeed a feat: a delicate balance of soup-to-filling ratio inside a wrapper that must be thin enough to avoid being too chewy, but also strong enough to not tear as it’s lifted from the steamer basket, lest it spill its liquids impotently onto the table.

XLB’s namesake menu item is... fine. It’s one of the best you can score in town at this point, a pork-filled purse that arrives piping hot in batches of eight for $10. Eat them as quickly as your tongue can stand it—like a self-destructing spy message, the dough thickens as the soup leeches into it. (XLB, rightly, does not serve them to go.) Still, even the freshest of these soup dumplings stray toward inexpertly thick at the top—Shen is not hand-twisting each of these, obviously, so there’s hope his still-learning staff will get better after a couple thousand more turns. The amount of soup and filling is just fine, if lacking any major sort of flavor pop.

Rounding out the rest of your meal at XLB is where the real difficulty lies. A recent $10 glass of rosé poured from a tap behind the counter arrived a quarter full (or three-quarters empty, if you’re a pessimist). A bok choy with oyster sauce ($8) was too salty to eat more than a few bites of, and a five-spice popcorn chicken ($8) had an oddly off-putting flavor and left a dry mouthfeel. An order of Shanghai pork and shrimp noodles ($10) arrived thick and gummy, with exactly six small shrimp and in need of a serious kick of heat.

Go instead to the garlic eggplant with tofu and peas ($8), and add rice for $1—the wok-softened eggplant and fried tofu absorb the pungent sauce, but hold their texture. I’m not partial to steamed baozi—I find the thicker, steamed dough overpowers the fillings in nearly every case—but XLB’s are pretty textbook, arriving three to an order for $9. (Get two plus a pint of draft beer for $9 from 5-6 pm daily.)

We’re in early times for dumpling greatness. Along with XLB, here are a few more second-wave pioneers:

This downtown Szechuan and dumpling restaurant took over the failed First National Taphouse last year—the logos for the old place are still on the tables—and has since been quietly putting out the most consistently great soup dumplings in town. The pork and shrimp are served up in a basket of nine for $10.95, with great flavor and very little clunk in the dough wrapping. But don’t ignore the other dumplings on this absurdly huge menu. My heart has been claimed by the pan-fried pork buns for $10.95—six mounds of crisp shell encased around juicy and gingery pork—and the surprisingly juicy and unusual lamb dumplings for $9.95.

It’s amazing to see what a restaurant can do in just a year. Chef-owner Peter Cho was pretty much killing it from the start, with prix fixe Korean dinners the likes of which Portland had never seen. Among his finest dishes from the start has been pork and chive dumplings, fat packets full of flavor served in an addictive black vinegar and ginger broth. Starting earlier this year, Cho’s doubled down on dumplings, and is hosting a no-reservations, super-casual (bring the kids!) dumpling and noodle night on Sundays and Mondays. Get the OG dumplings that started it all, along with ravishing kimchi and pork dumplings ($9) and another porky bundle mixed with charred broccoli rabe fused with Mama Lil’s peppers ($10). Don’t leave without an order of the incessantly succulent Korean fried chicken ($9) and a piping hot bowl of budae jjigae ($13), the soup borne of American occupation of Korea: all red boiling spice with instant ramen, spam, hot dog, rice cakes, kimchi, and American cheese—a sodium-laced wonder dish.

Comments 2
Tags: Food and Drink Andrea Damewood Last Supper
If you enjoy articles like this, please help the Mercury continue our mission of providing up-to-the-minute information, progressive journalism, and fun things to do in Portland by making a small recurring monthly contribution. Never forget: Your help is essential and very much appreciated!
CONTRIBUTE NOW 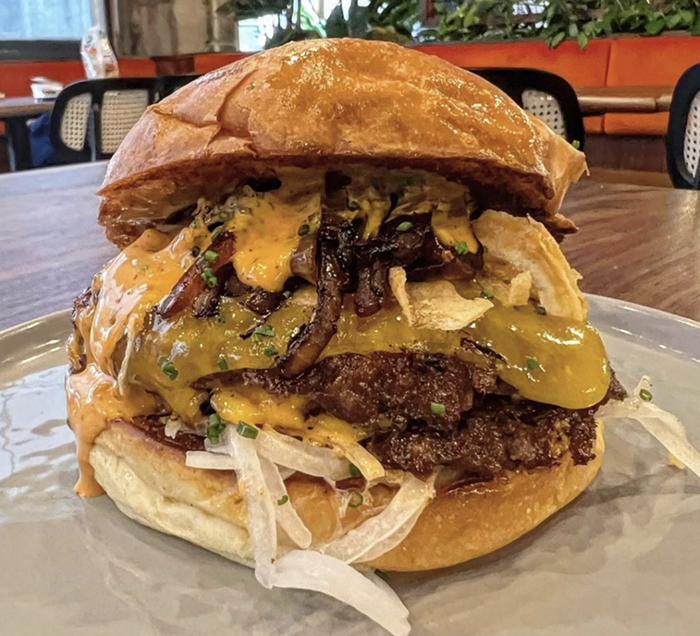