And the Best Tamago Nigiri I've Probably Ever Had

Whenever he sat down to eat at a new seafood place, my stepfather would always order the clam chowder, declaring that if a chef couldn’t master this basic, the rest of the menu was also likely to be garbage.

I thought of this as I marveled at the simple perfection of the rice at the sushi bar of the new Nimblefish. When it comes down to it, sushi is all basics: rice, fish, and knife work—and few in Portland can match the skills of Cory Auger and Dwight Rosendahl.

Auger, formerly of the beloved Hokusei and the cult-favorite pop-up Fukami, is back behind a permanent counter on Southeast Hawthorne. From a watchful perch close to the door, he slices fish sourced fresh from Tsukiji in Tokyo, sea eel from Hokkaido, and pieces of mackerel cured and aged in-house. Only Nodoguro, with its high-end Supahardcore sushi nights, has this level of rarity and freshness, and those dinners come just a few times a month, while Auger & Co. are serving five nights a week.

At Nimblefish, each slice is cut to perfection. The salmon’s soft fattiness is suddenly in its own platonic image: if you shine a light on it in a cave, a full fish would appear on the wall. The anago (sea eel, $3) is warm, with a subtly sweetened soy painted over the top—a far cry from the tar-slick of sauce you’ll find at most spots.

On one visit, we were able to score uni (sea urchin, $8) from both Santa Barbara and the north of Japan, both achingly creamy and so full of the sea you could feel it at the top of your throat, with differences in their provenance coming out when served one after the other.

If you sit at the bar, each piece arrives as it’s made. Grab it with your fingers and pop it right in your mouth, as these are already seasoned to perfection with wasabi and other flavors before it hits your dish. (I like to flip my nigiri, so the fish lands on my tongue instead of the rice.)

Although there’s almost always a wait, hold out for the bar. Sitting at the singular, long table was a totally different, and bad, experience. Diners are seated close enough for their chopsticks to nearly touch—and certainly close enough to endure overhearing two women in expensive athleisure-wear grilling the server about which items are, like, gluuuuteeeen freeeee. If you’re in the middle, prepare to awkwardly scooch your way behind three other diners to use the restroom mid-meal.

Despite Nimblefish’s high prices, service is nearly absent. A waitress plunked down three unrolled temaki in front of the athleisure women—a sort of open-faced sushi roll situation—and walked off, leaving them agog. She tried to do the same to us, but explained (after being asked) that the chef does not roll them himself in order to keep the nori from going soft as it sits. This is fine, but Nimblefish’s ascetic menu is already difficult for those who aren’t steeped in sushi culture.

Just a few tweaks have the potential to make Nimblefish epic. Adding a few approachable “filler dishes” would go a long way in allowing those who want great fish but don’t want to spend $150 to fill up. (I’m not kidding: a recent meal for two, consisting of seven nigiri and one-and-a-half hand rolls each, plus one sake, one green tea and tip, ran $91—and I went home and had a snack.)

A chance to order omakase (chef’s choice) would also be a help. In fact, my favorite meal was one in early March, when the restaurant briefly offered a $40 omakase that included hon masu (firefly squid) with cucumber and sauces, and a few other inventive dishes along with several nigiri and temaki. I returned a week later to find it gone.

Still, it’s a real treat to bite into the best tamago (egg, $2) nigiri I’ve probably ever had—layers of paper-thin omelet folded upon each other for an effect that’s somehow both dense and fluffy, beautifully sweet and savory. And, when you think of it, it’s a small price to pay for this caliber of sushi available nightly.

Tues-Sat, 5-10 pm. Be prepared for a wait. Reservations for parties of six or more. Bring your kids, even though it’s weird to do it. I guess.

Comments 1
Tags: Food and Drink Andrea Damewood Last Supper Eat and Drink Spring 2018
If you enjoy articles like this, please help the Mercury continue our mission of providing up-to-the-minute information, progressive journalism, and fun things to do in Portland by making a small recurring monthly contribution. Never forget: Your help is essential and very much appreciated!
CONTRIBUTE NOW 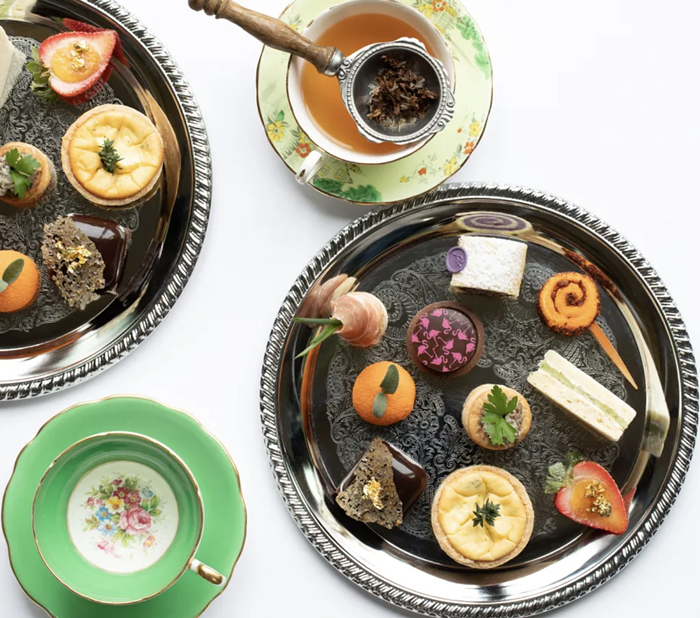