The original Oakshire brewpub has long been one of Eugene, Oregon’s low-key gems: a simple, unfussy taproom with an emphasis on beer, accompanied by a small cluster of food carts outside. Brewing in small batches, Oakshire usually has something new and worthwhile to offer with each visit, although their reliable standbys—including their Amber Ale, Citrafonix IPA, and espresso-laden Overcast Stout—have penetrated the market in Portland and around the state.

Oakshire’s newly opened Portland taproom, which takes over the space on Northeast 42nd vacated by restaurant/market Old Salt, brings the full roster of Oakshire’s beers up from Eugene and serves them in a similarly laidback environment. Once again, they’ve outsourced the food, putting their primary focus on their ample menu of beers.

The space, as it was before, is divided into two smart rooms separated by a simple wood framework to keep the space airy. With little clutter or fancy décor, Oakshire has toned down the old-country-kitchen vibes of Old Salt in favor of something more utilitarian. (There’s no brewery here, but a photomural of one takes up the north wall.) At the bar, tap lines travel through a large, custom-built industrial-looking pipeline, and a flatscreen displays the list of available beers, although for a more detailed description of what you’re drinking, you’ll want to glance at the printed menu.

A few tables line the sidewalk out front, and there are plans to turn the back room into an event space; the adjacent parking lot is also being considered for an outdoor beer garden with food carts. For now, however, it’s an ideal place for a casual pint or two. If you don’t even have time for that, peruse the extensive selection of beer-to-go in the cooler; there’s even a separate menu for packaged beer options, including four- and six-packs of cans, 22-ounce bomber bottles, and fancy 750-milliliter bottles for their specialty beers.

Although not exactly cutting-edge, you shouldn’t pass up getting a pint of Oakshire’s flagship Amber Ale on nitro. It’s a delightfully smooth and creamy experience and tastes immeasurably fresher here than wherever you might have gotten it last. With its caramel maltiness and light hoppiness kept to tastefully restrained levels, it goes really well with pizza and grilled meat—the latter of which you can have delivered to your table (more on that in a sec).

If amber’s too robust for you, Oakshire’s lighter options are all solid, including a Beer Hall light lager that’ll barely get you buzzed, a Czech-style Lagerbier, and a really nice Smoke’N Hell with spruce tips, the smokiness lending just a faint wisp of complexity. Their Whit Bier—a take on a Belgian white—offers a zap of refreshment and subtle spice, and their Sun Made Cucumber Sour is ideal for the waning weeks of summer.

The pale ale and IPA entries are also solid, although I’m hard-pressed to pick one that stands out from the ultra-crowded local field of hop-forward beers. Their Hazy IPA and Public House Pale Ale are both decent choices, neither of them over the top. Be sure to check back this month for a fresh-hop beer, which will undoubtedly make its way up from Eugene.

Oakshire excels at the darker end of the beer palette, and on a recent visit they had four different kinds of stouts as well as an English “brown” porter. Their Dry Irish Stout had a surprising amount of charcoal-y roastiness, and the famed Overcast on nitro is tough to pass up.

The kitchen is occupied by Biba! CHamoru Kitchen, operated by Ed Sablan, formerly of the PDX671 food cart. Biba!’s menu showcases the cuisine of Guam, with an emphasis on grilled meats and bright spice. The house dish is kelaguen, a sort of chicken salad (or tofu) made with chilis, lemon, coconut, onions, and green onions, served cold with greens. It comes with red rice or—better yet—titiyas, a flatbread made with coconut milk. The kelaguen is unique and habit-forming, although for something more traditional, you can go for the fiesta plates, with barbecued chicken, pork spareribs, or veggies. They’ve got an array of starters and snacks, too; the shrimp fritters were a perfect blend of airy puff, crispy batter, and shrimpy succulence.

Kids are welcome at all hours, and the place already feels like an anchor along this busy strip of 42nd. While Portland isn’t exactly starving for more brewery outposts, Oakshire’s beer-forward presentation—and its partnership with local food purveyors—already feels like part of the city’s landscape. 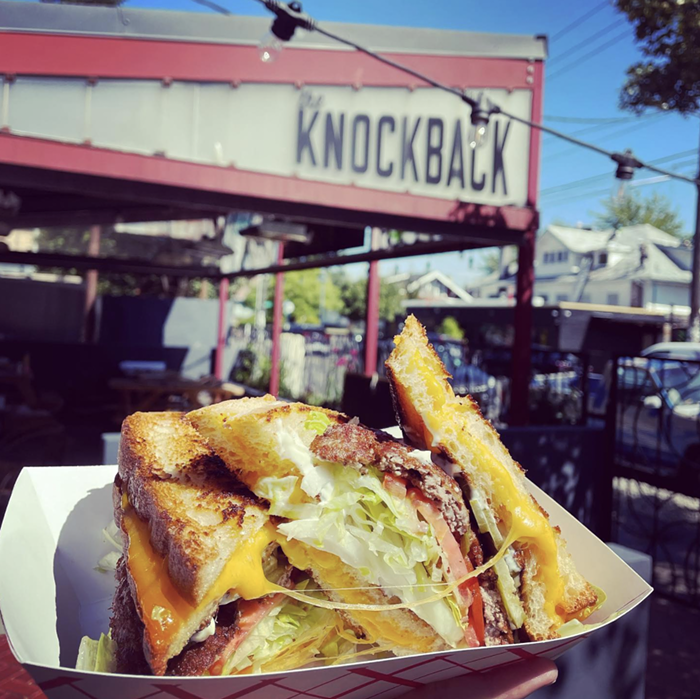