The Best Things to Do (While Staying Home and Staying Safe) in Portland: Sat May 9

The 15th Annual HUMP! Film Festival
We at HUMP! were crushed to cancel our originally planned Spring re-screening, with the coronavirus crisis forcing us all inside. But after receiving enthusiastic support and permission from the filmmakers to show their films online, we knew that the show must go on! Even if we can’t watch together in movie theaters, we can still watch the 16 all new, sexy short films, curated by Dan Savage, in the privacy and safety of our homes. Dan will introduce the show (starts 7pm tonight,) and then take you straight to the great dirty movies that showcase an amazing range of shapes, colors, sexualities, kinks and fetishes!

MTV's The Challenge
This last Wednesday, Jasmyne Keimig wrote a piece celebrating the resurgence of "smooth-brained" reality TV as a balm for the time we live in, a time where every tidbit of news seems specially formulated to stab, spike, and wrinkle our cerebral cortex to anxious ruin. Well, if it's smooth-brained fun you seek, might we suggest one of the best possible options: MTV's The Challenge, the best possible iteration on the "Battle of the Network Stars" idea, and one of the rare examples of a TV-spinoff that effectively replaced its progenitors, The Real World and Road Rules. CBS/Viacom's free-streaming platform Pluto TV has an entire channel dedicated to nothing but looping whole seasons of the show (currently in the middle of its 35th season on MTV proper). It hasn't just outgrown The Real World (or killed it, more accurately) it's now pulling in contestants from other Viacom reality shows, including Big Brother, Are You the One, Geordie Shore, Survivor, and more. When the two finalists of The Ringer's latest "Best Reality Character" bracket both come from this show? Trust that it gets no more smooth-brained than The Challenge.

Erykah Badu vs. Jill Scott
Normally, we suggest that in the case of these super-popular Verzuz "battles" on Instagram (they're not really battles because nobody really loses when so much good music is pouring out of the speakers like this) that you wait until after the battle is over, seek out a good recap of the stories being told by the participants, and then turn up the compilation playlists that appear on Spotify, and enjoy being able to actually listen to the music. Well, in this case, we're throwing all that good advice out, because the jewels of wisdom guaranteed to be dropped by Erykah Badu and Jill Scott during their livestream (4pm on Insta) are going to be too precious to miss. Plus, you'll want to be there to see what happens when both of them try to break out "You Got Me" by the Roots. It'll probably look like this, but with better headwear.

Gabriel Rucker Helps you Cook a Mother's Day Brunch
Le Pigeon's Gabriel Rucker knows you want to do something special for the day, like the overachieving child you've always been, when your other siblings got her cards and whatever weird gift they could afford with their meager allowance and you brown-nosed your way to the head of the class with some special handmade thing that made you her favorite even though she said she doesn't have favorites but we all know that's bullshit, right? ANYWAY: since you can't just come to Le Pigeon for their regular Mother's Day brunch, he's going to show you how to make his special latkes and apple pear sauce on his Insta at noon. It's as close as you'll likely get to Chef Rucker helping you in your own kitchen, so if you wanna go for those extra-extra brownie points, you can tell mom that the head chef at Le Pigeon helped you make these! It's only kind of a lie, right?

Mother's Day Shopping
Okay, so you're one of the other (normal) kids who isn't trying to rope five-star chefs into your Mother's Day plots. You know you just wanna get her something she'll appreciate from the store. One of the bigger Mother's Day conundrums is always "what the hell do I get her?" She gave you life, you gave her a pen? A card it took you all of two minutes to dig out of a rack at Wal-Mart? Nah. One of the best solutions is to let her choose what she wants, and Crafty Wonderland is all about this option, providing special "virtual appointments" for shoppers, which means you email Crafty Wonderland, set up a time, and someone at the Crafty store will then log in, turn on the camera, fire up either Zoom or FaceTime, and walk the store with you, stopping and pulling stuff off the shelves to be shipped to mom (or you I guess, you selfish, selfish child!). Appointments generally take about 30-45 minutes, and shipping is free for purchases over $50.

Red May
At this point you might be almost as sick of this holiday and it's commercialism as its poor creator was, before she died mostly-broke in the late '40s after decades of fighting against the holiday's capitalistic existence. GOOD NEWS: It's Red May! This annual, intellectual "vacation from capitalism" ("the most star-studded regular radical left event in Seattle," as The Stranger's Charles Mudede writes) offers new takes on Marx, equality, and economics in community spaces. The monthlong festival began on May 1st, and will continue throughout the month through virtual meetings on Zoom, featuring guests like Jodi Dean, Leo Panitch, Kathi Weeks, Micheal Hardt, Joshua Clover, and Doug Henwood. Click here for a complete list of speakers, guests, and panel times.

Let's begin by recalling what Ezra Pound once said about the ideal condition for music and poetry: "Music begins to atrophy when it departs too far from the dance... [and] poetry begins to atrophy when it gets too far from music." For now, let's forget that Pound became a fascist and that his poems were more imagistic than musical—and we will also stay clear of the horrors he created in the name of Li Bai—and focus on the music that fills Plath's poem, which you can hear her read here, in 1958, five years before she committed suicide in a London apartment. Listen to the music: "Of sulphurous dreamscapes and obscure lunar conundrums," and here: "Trailing its telltale tatters only at the outermost / Fringe of mundane vision, this ghost goes," and here: "And moo as they jump over moons as new / As that crisp cusp toward which you voyage now." You can find this poem in The Colossus and Other Poems, available at local bookstores. CHARLES MUDEDE

Takeout & a Movie: Phoenix, Oregon
Dinner & a Movie is a date-night tradition that's had to shift a little (as all things have) while sheltered-in-place, and that's put a lot of stress on the local food service and film communities. The Oregon Hospitality Foundation is looking to address all of that tonight with this special livestream movie night. $6.50 gets you a rental link (and a free digital copy to own later this summer) to director Gary Lundgren’s Ashland-made film in which a divorced, middle-age graphic artist (James Le Gros) who's suffering “delusions of aliens controlling his life" decides to buy an abandoned bowling alley. That’s one depressing-sounding midlife crisis… but also, hey! Bowling! And co-stars including Diedrich Bader, Kevin Corrigan, Jesse Borrego, and Lisa Edelstein! It also includes a Q&A with the filmmakers that starts live at 7pm, and all revenues will go towards the Oregon Hospitality Foundation's support of restaurants affected by COVID-19.

20 Feet from Stardom
A documentary that turns the spotlight away from the biggest music stars of the last 60 years and onto their backup singers. These singers—often women, mostly black—are responsible for some of the most memorable sounds of popular music. Most of us don't even know their names. 20 Feet from Stardom (now streaming, Netflix) is fabulous for its music, interviews, and amazing concert and studio footage spanning several decades. But it's more than just eye candy for wannabe rockers and sentimental boomers; it also asks some big questions about fame, art, and giving credit where it's due. ELINOR JONES

Kraftwerk
This band is maybe more known for people knowing it had a huge influence on modern music than for people having actually listened to them. Kraftwerk deserves to be remembered as more than just the answer to some pop-culture trivia question, especially after this week, as one of its co-founders, Florian Schneider, died of cancer at the age of 73. Kraftwerk isn't just a influence on modern music, it's arguably one of the single most important influences, especially in the way it showed artists of the '70s (and '80s, and '90s, and '00s) how to manipulate electronic instruments to create some of the most impactful, lasting music ever composed. There are things bedroom producers are stumbling upon and swearing by to this day that were actually invented by Kraftwerk before your parents (and even possibly their parents) were born. Listen loudly, and (re-) learn.

Tags: Food and Drink Books Movies & TV Music Mercury staff
If you enjoy articles like this, please help the Mercury continue our mission of providing up-to-the-minute information, progressive journalism, and fun things to do in Portland by making a small recurring monthly contribution. Never forget: Your help is essential and very much appreciated!
CONTRIBUTE NOW 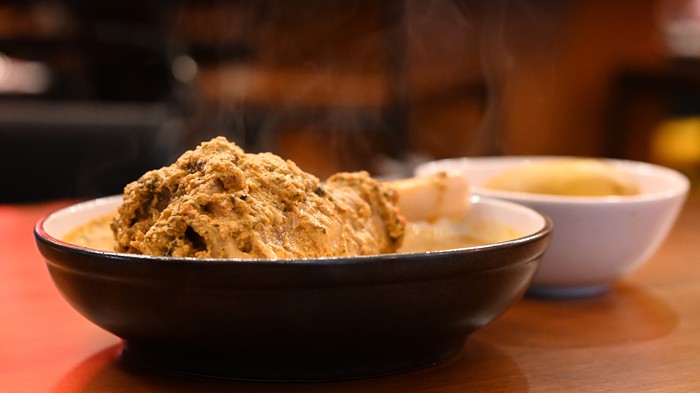