The Best Things to Do While Staying Home and Staying Safe: Memorial Day!

Uncut Gems
It's beyond bizarre to know for a fact this exhausting, nerve-jangling drama is going to be the most watched thing on Netflix for the next couple of weeks, considering it's a low-budget arthouse flick directed by the Safdie Brothers, who specialize in choppy, frenetic, aggressively off-putting narratives about amoralistic assholes spiraling down into a void of self-destruction. So why are millions upon millions of people 100-percent not ready for the torrent of noise and teeth-grinding discomfort that is Uncut Gems (Streaming May 25, Netflix) going to unwittingly subject themselves to it ASAP? Because it's got Adam Sandler in it. Probably the best performance Sandler's ever given, in fact. It's not the funniest performance in the movie, though. That belongs to Kevin Garnett.

The Story of Soaps
What better way to celebrate staying home on a Monday afternoon than by digging into The Story of Soaps (Now streaming, Hulu). Soaps are long past due for a star-studded retrospective like this, especially since they were the first mainstreamed examples of "shared universes" and "binge watching," and "time shifting" (I can't be the only kid whose mom taught herself how to program a VCR to maintain a library of All My Children stories.) A ton of the home entertainment innovations we all take for granted here in 2020 were invented by the soaps, and a panel of experts including Carol Burnett, John Stamos, Susan Lucci, Bryan Cranston, Agnes Nixon, Erika Slezak, and Alec Baldwin will walk viewers through the soaps' foamy, fantastic history. But be warned: With about a half hour to go, it... sorta becomes an informercial for reality shows? As if Real Housewives, as fun as it might be to watch, could ever, EVER compete with Erica Kane or Viki Lord.

Fire up the Grill!
There's a lot of unnecessary mystique surrounding the grill, and were this a normal Memorial Day there'd probably be a couple fights already over who gets to make fire and put food on said fire for eating later. But don't let any grunting neanderthal friends of yours intimidate you away from that Weber: Grilling really isn't that hard, and to prove it, YouTube cooking celebrity Anthony Rea of the Binging with Babish channel has a short 'n' sweet 10-minute video that can catch you up on the basics of grilling, basics that most chest-thumping grill captains only pretend to know.

Wolfenstein: The New Order
Doom: Eternal came out earlier this year and continued Bethesda's winning streak of story-driven, ultra-violent-yet-oddly-charming single-player first-person-shooters (whew that's a lotta hyphens). But there's an alternate history where Doom doesn't get successfully revived, because on that timeline, Wolfenstein: The New Order isn't a fast, fun, and satisfying success of gameplay and storytelling that takes gaming by storm in 2014. Luckily, we live in this timeline, where Wolfenstein's revival winningly used gonzo sci-fi settings and outlandish what-if scenarios (i.e. what if Nazis won WWII and established a goddamn MOONBASE guarded by ROBOT DOGS) to tell an honest-to-god affecting story of resistance against fascism in all its forms. If you've never played it, it's only $9.99 on PS4 right now, and you could do worse than to spend a cozy Memorial Day utterly destroying a bunch of space Nazis. Hey, speaking of which...
Star Wars
May 25, 1977 was the day a bearded nerd named George Lucas released Star Wars—a low-budget mashup of Akira Kurosawa movies and Flash Gordon serials—to less than 40 theaters. The movie starred a soap actor named Mark Hamill as the improbably named Luke Skywalker, a dorky hick from the boondocks who meets up with a maddeningly smug mystic (Alec Guinness) that drafts him to rescue a pissed-off princess (Carrie Fisher) with the help of an arrogant dipshit Uber driver (Harrison Ford) and his overgrown dog (Peter Mayhew). They all end up overthrowing a fascist regime of space Nazis along the way. It ended up being pretty, pretty popular. It's available to stream on Disney+, if you want to watch it. There's a beeping trash can that talks mad shit the whole movie, too. He's the best.

World War Z
DID YOU KNOW: The guy who played Luke Skywalker is also a very good voice actor? He was the Joker in Batman: The Animated Series, for example. That means he was the best version of the Joker ever. And yet: It can be argued that's not even his best voice acting performance! Because he also played gunner Todd Wainio, veteran of the Battle of Yonkers, in the audiobook of Max Brooks' World War Z (available at MultCo Library w/ Card; on Audible, $28 to buy, free trial here) and Hamill's performance is good enough to almost make you forget he didn't actually survive a zombie apocalypse. Brooks' book was made into an okay blockbuster movie, but there is likely no version of World War Z that ever tops the audiobook, which along with Hamill features a cast that includes F. Murray Abraham, Alan Alda, Rob and Carl Reiner, Henry Rollins, Nathan Fillion, John Turturro, David Ogden Stiers, and Alfred Molina among others.<

Little Fires Everywhere
Hulu's adaptation of Celeste Ng's best-selling book has been knocked for essentially removing all nuance from Ng's novel, and it's hard to disagree that the story is a lot louder than it was on the page; This show doesn't feel like the book... but the sour, entitled, pretty-on-the-outside-but-mean-as-fuck-for-no-good-reason vibe it absolutely nails from its first 15 minutes on? That's some genuinely authentic '90s nastiness; the kind of sunshine-covered bitterness these characters would snidely razz as they watched their umpteenth hour of Ricki Lake from the comfort of their couch. The miniseries is now available in full on Hulu, and the approach taken with the source material (an approach Ng herself applauded, probably best realized dramatically by executive producer and director Lynn Shelton) makes a lot more sense when the reworked story is taken as a whole.

Cirque du Soleil: Kurios
In 2017, Cirque du Soleil brought their big-top extravagance to Portland to transforms the Moda Center into the curio cabinet of an old-timey inventor, bending reality, time, and space into a variety of stages and platforms by which this troupe of amazingly flexible performers do their mind-and-body-bending work. If you missed that show, head to YouTube and get yourself yourself a (third) eyeful of this steampunk wonder.

Young M.A.
Young M.A—born Katorah Marrero—is unique among her peers. While her low voice, stud swagger, and off-the-charts machismo may give the impression she uses alternate pronouns, the artist has made it clear she’s perfectly at home in her assigned female gender. She named her 2017 EP Herstory, after all, and followed that up with the critically acclaimed Herstory in the Making, and just this weekend released her latest, Red Flu. While Young M.A’s sexuality is definitely part of her content, it’s not a gimmick she’s leaning on. She didn’t set out on some heroic mission to pave the way for other queer rappers. She simply came into the game as the real her—for better or for worse. Now M.A is unintentionally changing the narrative for what is and isn’t acceptable in rap, just by being authentically, unapologetically herself. JENNI MOORE

Tags: Food and Drink Books Video Games Movies & TV Music Mercury staff
If you enjoy articles like this, please help the Mercury continue our mission of providing up-to-the-minute information, progressive journalism, and fun things to do in Portland by making a small recurring monthly contribution. Never forget: Your help is essential and very much appreciated!
CONTRIBUTE NOW 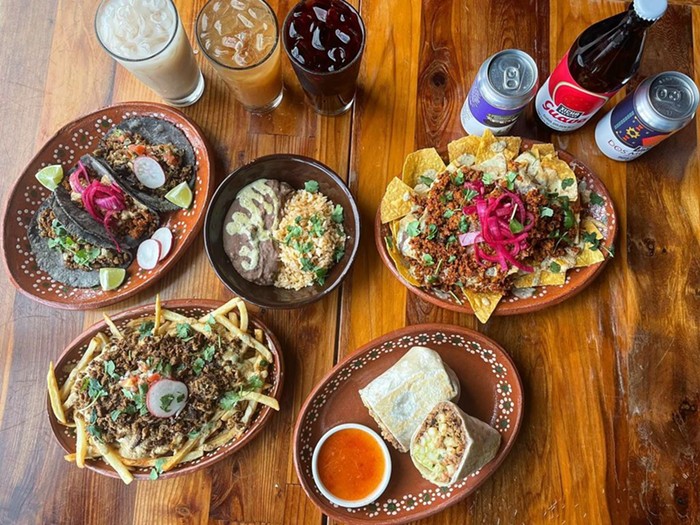